For other past events, check out our blog. 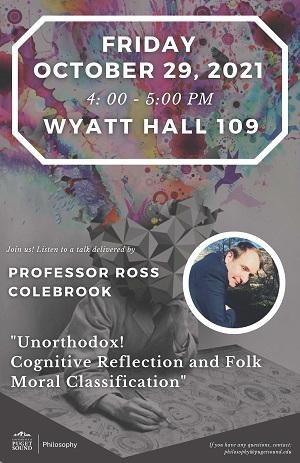 September 30, 2021
6:00 p.m.
Film Screening: Children of Men  (CAMPUS Only)
This screening is part of the ASUPS campus films series. 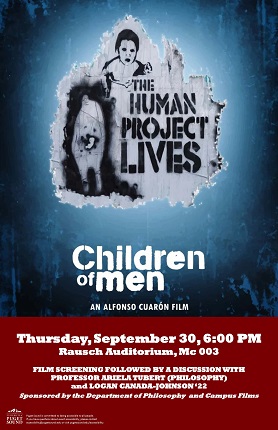 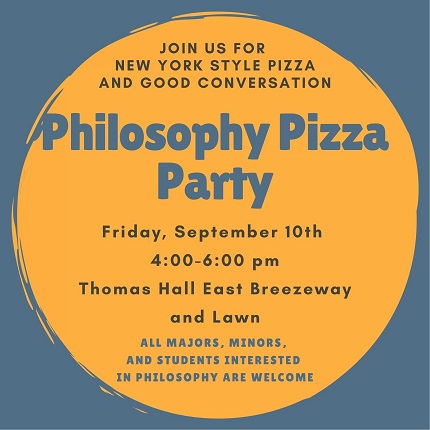 Abstract: In this paper I argue that frameworks for population health ethics are often insufficient for addressing feminist concerns. While the nascent field of population health ethics should theoretically be congruent with various feminisms, I argue that it is developing in a way that is troubling in terms of its feminist applicability, particularly when we assess two sets of relevant literature: academic bioethics literature, including textbooks, and health policy guidance.

First, the conceptions of justice and equality invoked in the dominant academic literature – conceptions that should be foundational to population health ethics – frequently tend to be irrelevant to or even in conflict with feminisms. I identify three primary troubling characteristics of that literature: methodological ahistoricism; astructuralism; and distributivism.

Second, while health equity is rightly becoming a key value pursued in contemporary health policies and protocols, such as guidance on pandemic preparedness and the ethical allocation of COVID-19 vaccines, I argue that it is not adequate for representing the concerns of injustice associated with feminisms because it tends to be ad hoc in nature and focuses only on health and, at that, only on its distribution.

My paper is primarily a critique; however, it has constructive implications. In the final section, I will identify what we can learn about the required characteristics for a feminist framework of population health ethics, and explain why we need one. 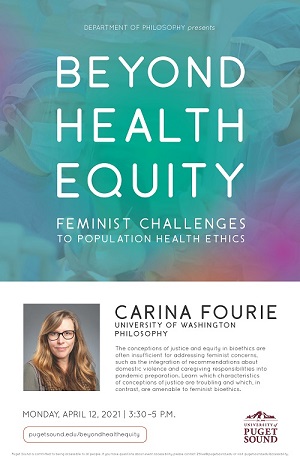 March 8, 2021
"After Philosophy: Success Stories from Alums"
An informal discussion with alums Maia Bernick '15, Jessica Chan-Ugalde '18, and Colleen Hanson '19  on how philosophy shaped and boosted the post-graduation careers of three Puget Sound students. They spoke on a virtual panel about their careers - in law, in tech consulting, and in academia. The panelists spoke about the skills they gained from their philosophy degree, how philosophy combines with their other interests, and how these skills prepared them for their next steps. The event also offered an opportunity for current students to connect with these alums.

These panelists represent just a small subset of the wide variety of careers that alums embark on, after graduating with a philosophy degree. We have alums in law, business, technology; in higher education; and in public service. 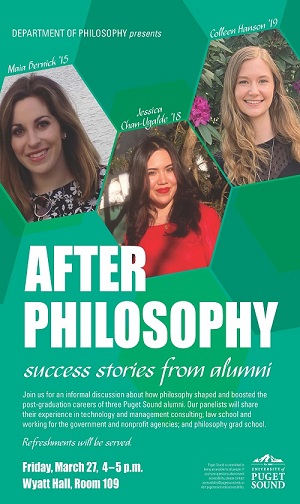 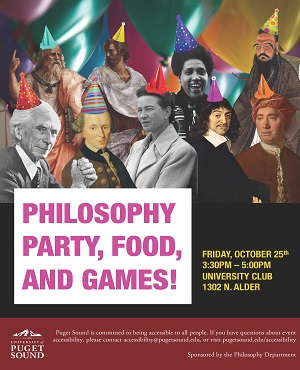 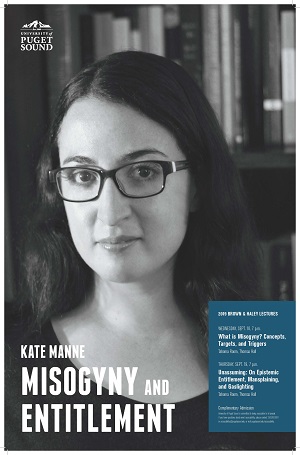 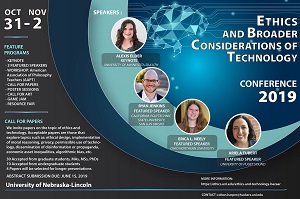 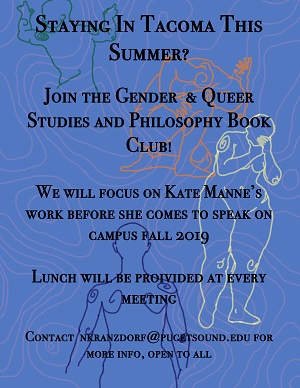 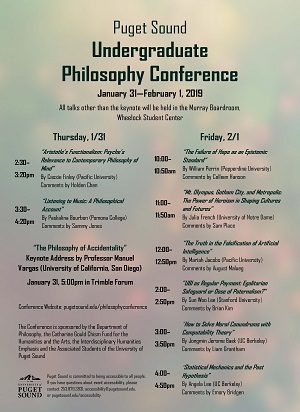 January 31, 2019
"The Philosophy of Accidentality" 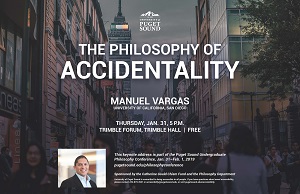 October 19–21, 2018
Film Screening: Far From the Tree
This screening is part of the ASUPS campus films series.

Far From the Tree follows families meeting extraordinary challenges through love, empathy, and understanding. This life-affirming documentary encourages us to cherish loved ones for all they are, not who they might have been.

This event is sponsored by the Philosophy Department. Co-sponsored by the Bioethics program, the Center for Intercultural and Civic Engagement (CICE), and the Office of Diversity and Inclusion. 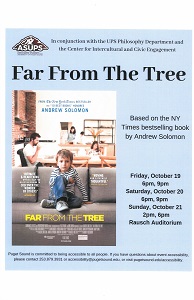 Abstract: There are several critiques of the application of idea of adaptive preferences to undercut disabled people who claim they have good lives (Amundson, Barnes, and Goering come to mind). There are also arguments against physician assisted suicide that seem to use an argumentative structure that is quite similar to the logic of adaptive preferences (i.e. a disabled person who has a desire to die has really adapted his preferences such that he prefers something that is sub-optimal only because other, better choices are out of reach). This talk tries to reconcile these positions by finding a way of parsing between uses of the idea of adaptive preferences that are instances of testimonial injustice against disabled people (as Barnes describes it) and those that genuinely describe a phenomenon in which a person's preference for PAS is distorted in the "sour grapes" sense. 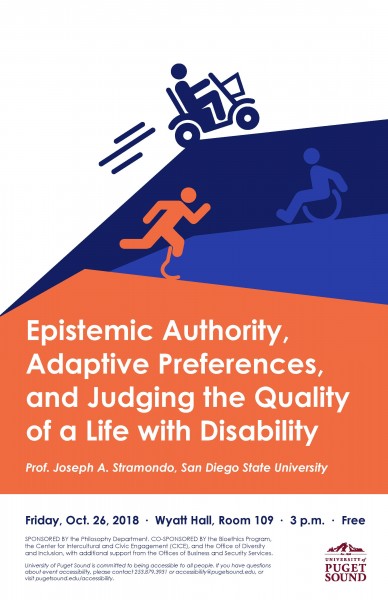 February 9, 2018
“Silence and Salience: The Ethics of Being Judgmental”
Lecture by Neal Tognazzini, Assistant Professor of Philosophy at Western Washington University

Abstract: Part of being adult is realizing that just because something is true doesn’t mean you should say it. But here’s a more controversial maxim: just because it’s true doesn’t mean you should think it. This is more controversial because although it’s reasonable to expect someone to have the self-control necessary to refrain from saying every little thing that crosses their mind, it’s unclear whether anyone has control over what crosses their mind in the first place. And yet we do criticize people for being judgmental, and it sure seems that sometimes such a criticism is warranted. In this talk, I plan to explore the way that our involvement in interpersonal relationships ought to structure our thoughts. My thesis will be that to care about someone is to be oriented toward them, or to see them through a particular mental lens, in a way that produces a particular pattern of salience and silence. That is: caring about someone (at least ideally) has the effect of making some features of that person particularly salient, and silencing or screening off other features from one’s consciousness. One is aptly described as judgmental when one’s thoughts do not display this sort of pattern, indicating a failure to fully adopt the orientation that constitutes properly caring about the person. 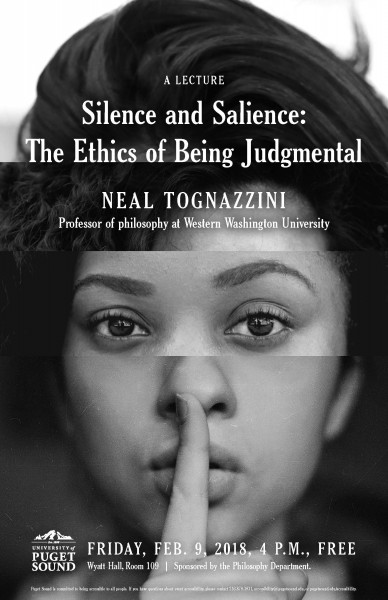 February 22, 2018
"Why Study Philosophy Cross-Culturally and Comparatively? An Applied Case from the Chinese Philosophy of Medicine"
Lecture by Wenqing Zhao, Assistant Professor of Philosophy at Whitman College

Abstract: We live in increasingly multicultural and cosmopolitan worlds where different people abide by different normative regimens. Modern people are called upon to comprehend how others understand the content and contours of a good human life. In this talk, I explore a variety of popular reasons to study culturally-situated philosophies. In particular, I give an applied case of conceptualizing health and wellness in light of the Chinese philosophy of medicine. In this Chinese context, health is not understood as a resource for life or objective of living. It is an integrated way of life centered around the concept of nurturing life (yangsheng 养生).  This Chinese perspective, which has endured and continued to inform the everyday life of Chinese people all around the world, raises important questions for its Western counterpart: Is health best understood as a resource for life fulfillment? Is illness the opposite of health? What is the appropriate healthy state that we should desire? In this case, Chinese philosophy enables us to critically reflect on the strengths and weaknesses of conventional thinking about health and wellness in the West. 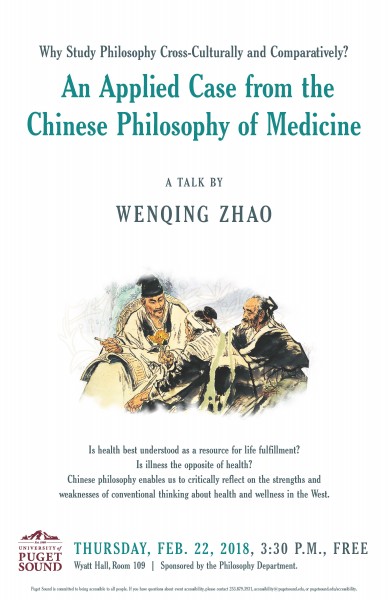 September 22, 2017
"The Perfect Bikini Body: Can We Really All Have It? Loving Gaze as an Anti-Oppressive Beauty Ideal"
Lecture by Prof. Sara Protasi 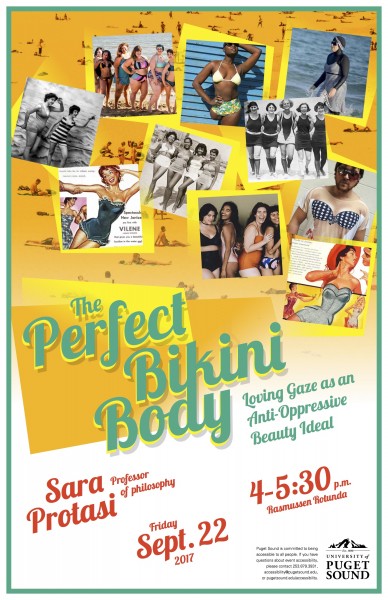 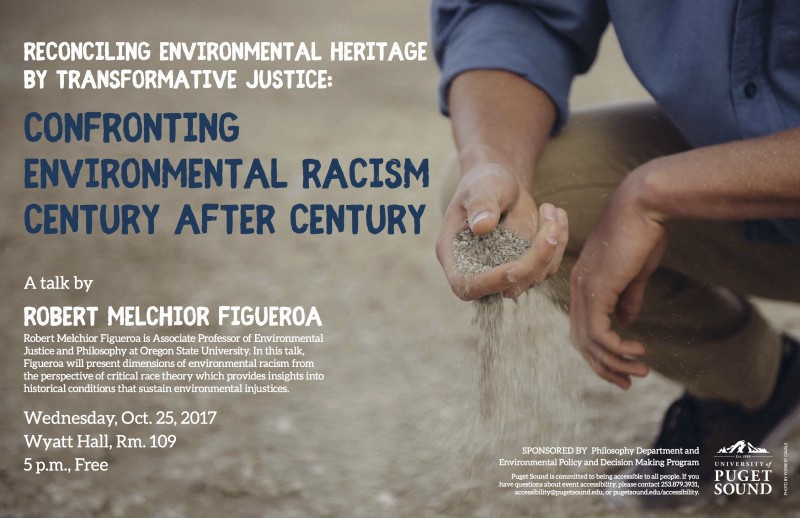 November 1, 2017
SHOT: A performance by the Spectrum Dance Theater
This event is sponsored by the Chism Lecture in Humanities and Arts Endowment, the Matthew Norton Clapp Visiting Artist Fund, the Department of Philosophy, and the Center for Intercultural and Civic Engagement. This event is also supported by African-American Studies, Theater Arts, CWLT, and Gender Queer Studies. 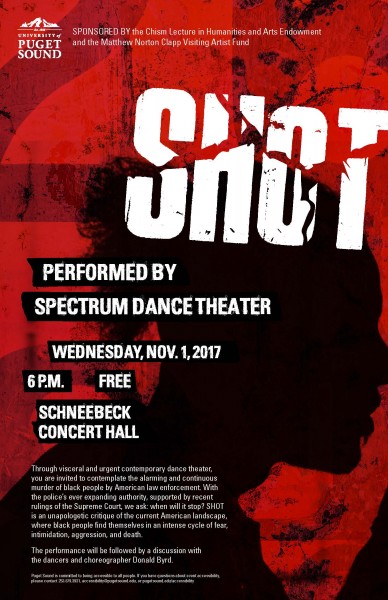 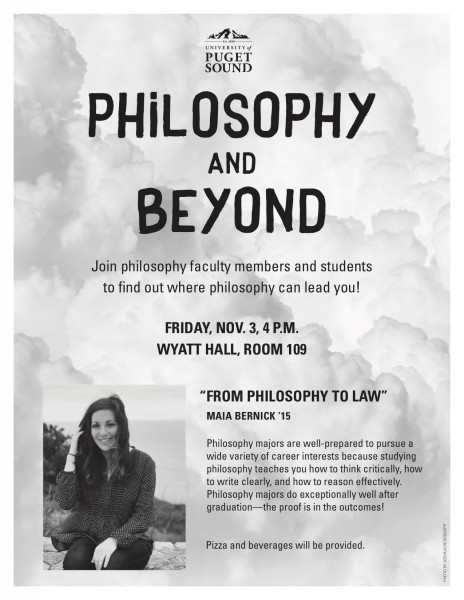