Kittredge Hall, the fifth permanent building on campus (after Jones, Howarth, and Anderson Halls and Warner Gymnasium), served as a student center for the first eighteen years of its existence, 1942-1959. Kittredge as a student center was vitally important in Puget Sound’s development—eagerly sought, heavily used, and much appreciated by students. After years of fragmented functioning of student groups in Jones and Howarth, Kittredge was where the unity of campus spirit could and did flourish. Kittredge was “home base” for the first generations of wartime and post-war “can do” students. All paths led to Kittredge.

John M. Kittredge Hall opened in January 1942. We can see it on the cover in 1947. John Kittredge never set foot on the campus, but his daughter, Grace Kittredge, gave a substantial portion of the $57,000 construction cost. As the college’s first student center, Kittredge was a rocking place during the 1940s and 1950s. Kittredge was perfect for a campus of 500 students, but the postwar enrollment boom meant a new facility was needed. The current student center opened in late 1959. In 1960 Kittredge was remodeled and became the home of the art department, a function it continues to serve today.

In 2016-2017 the campus celebrated the 75th anniversary of Kittredge Hall’s construction and opening. Kittredge is filled with evidence of its very beginnings. Take a walk through the building and outside with this brochure as your guide. 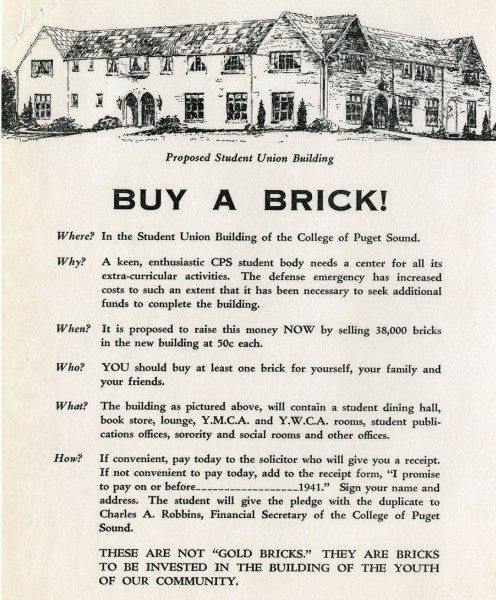 Students raised some of the $57,000 construction cost by mounting a “brickskrieg” in 1941, selling “bricks” for fifty cents each throughout Tacoma. Buyers received a paper “brick” and the knowledge that their real brick was in the building. 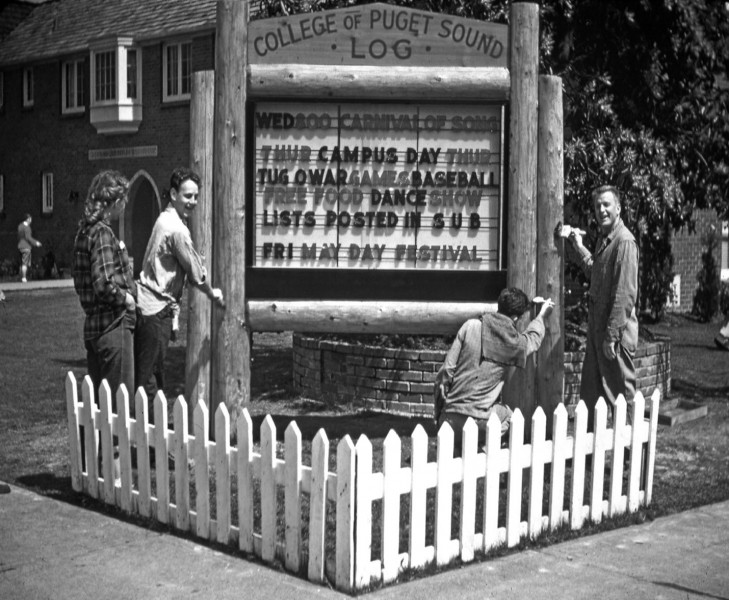 The College of Puget Sound Log outside Kittredge Hall kept students apprised of upcoming activities. In this photograph circa 1950, the Log informs students of three traditional late-spring events: Songfest, Campus Day, and the May Day Festival. The photograph was taken to drum up interest in Campus Day, as students pretend to do maintenance work on the Log. 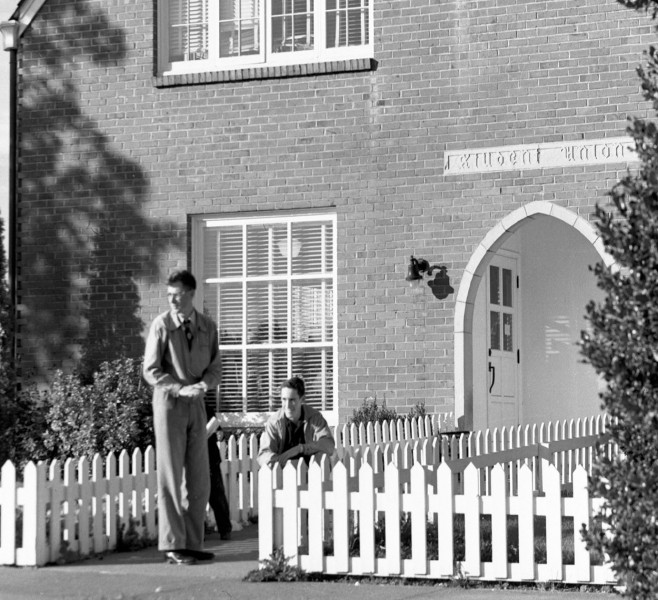 The outside blank lintel over the south entrance door originally contained the words “Student Union,” as seen in this 1951 view. The words were removed circa 1995. 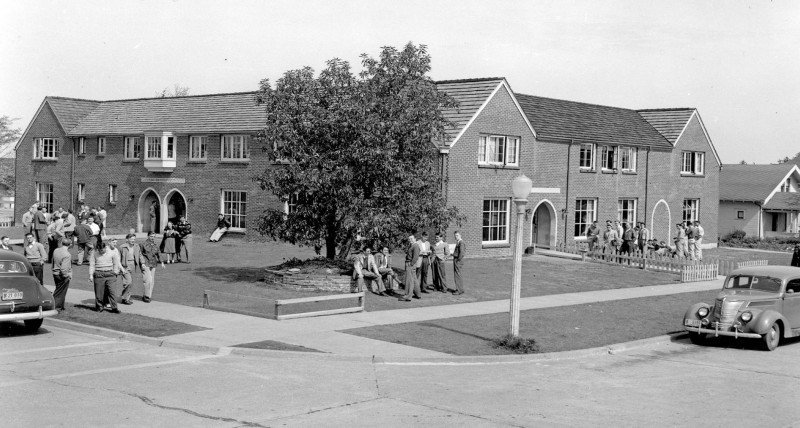 To the right of this south-side doorway is what appears to be another door, bricked over. Many had wondered when that door was removed. The answer is—never; there was never a door there. The architects felt that without the second archway, the building would look imbalanced. 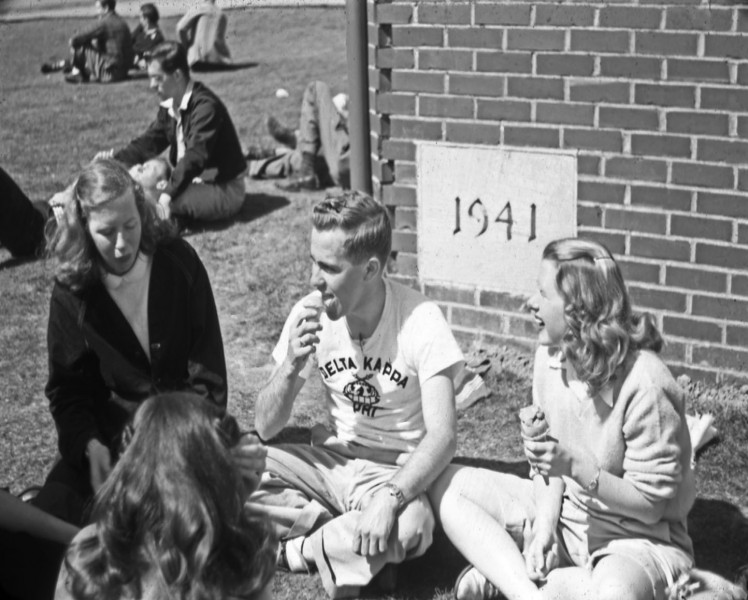 Kittredge Hall’s cornerstone was laid on November 14, 1941, and maybe viewed at the southwest corner of the building. Kittredge Hall construction was completed in December 1941. During Christmas break, the stove and food service facilities were moved to Kittredge from the old Commons in the basement of Howarth Hall.

In this photo, circa 1948, students enjoy ice cream cones from the Kittredge Hall soda fountain.

Finally, note the distinctive diagonal brickwork adding a decorative touch to each of the building’s four corners. 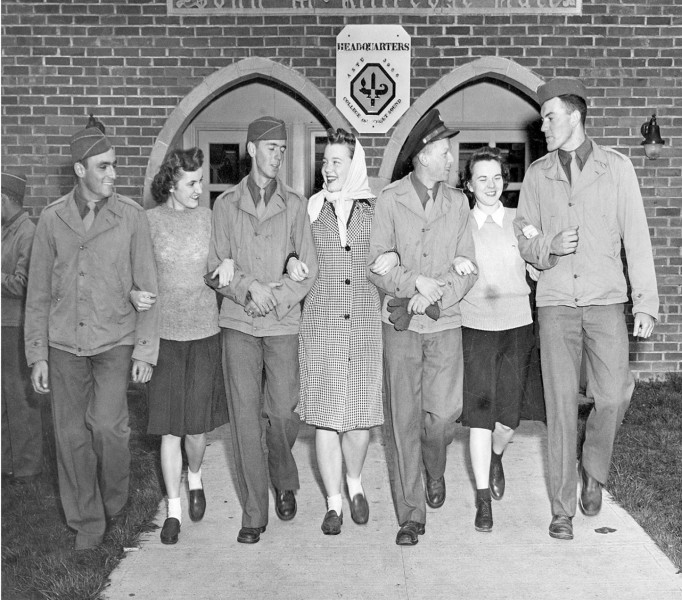 In December 1943, the campus welcomed 238 Army Specialized Training Program engineering students. They more than doubled the college’s enrollment. Kittredge Hall was headquarters for ASTP Unit 3966 and housed some of the soldiers, who called Kittredge “the palace. The others were housed in Warner Gymnasium, “the barn.” The sororities temporarily gave up their lovely corner chapter rooms. In March 1944, much sooner than expected, the ASTP men were recalled to active duty. Many were assigned to infantry battalions of the Third Army’s 11th Armored Division that fought late in 1944 in the Battle of the Bulge. Sixteen were killed during the first three days. A 1996 plaque outside Kittredge Hall’s Lawrence Street entrance honors the college’s ASTP soldiers. 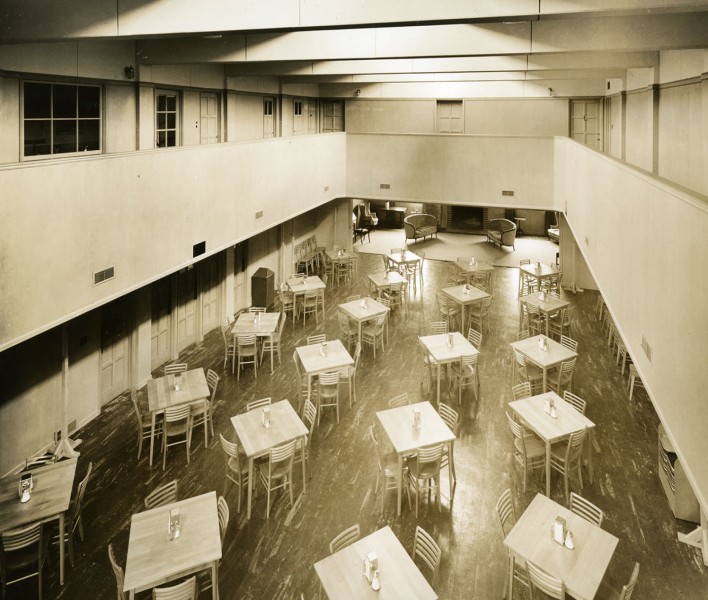 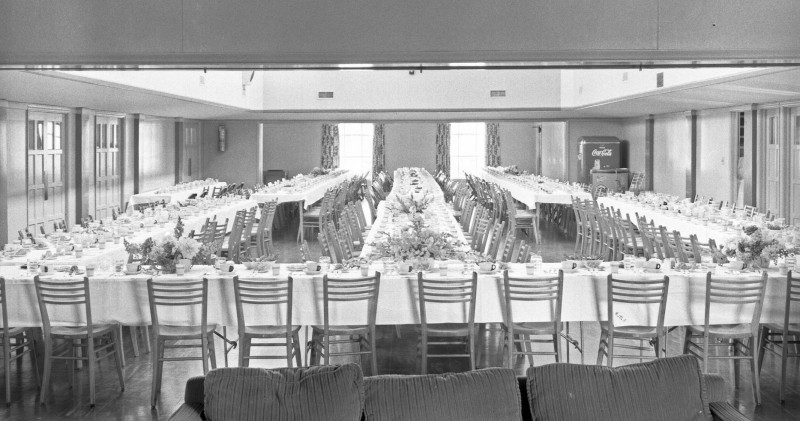 This 1949 view faces south, towards North 15th Street. The Commons is set for a large banquet. In 1960 a ceiling was installed over what had been the Commons for a second-floor painting studio. Much later, the original skylights were replaced with modern ones. Today, it is still possible to take a circular walk around the second floor on what was originally the balcony. 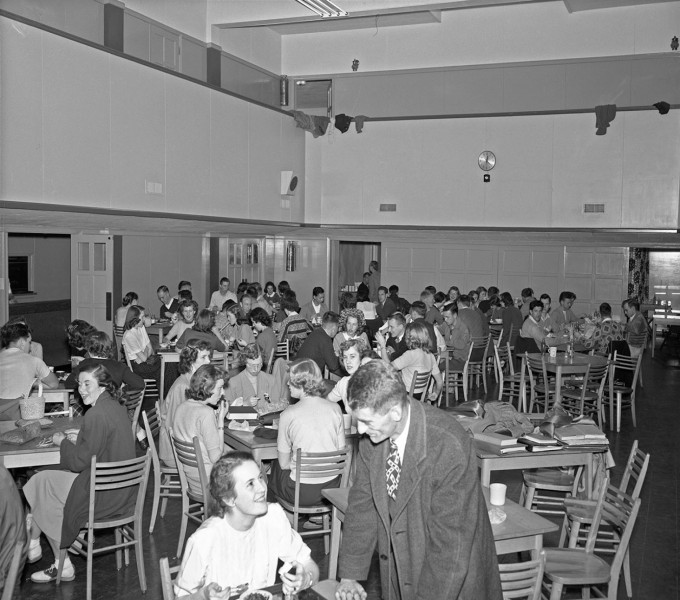 In this 1949 view, the sliding doors are in place at the south end of the main Commons room, although at right, we can still see through to one of the windows facing North 15th Street. Beyond the open door at the far left is the food service area, and just visible is the counter on which students placed their trays and dishes after meals. We see the south and east sides of the balcony that encircled and looked down onto the Commons. The room on the other side of the open door off the balcony at the top center is one of four sorority chapter rooms. 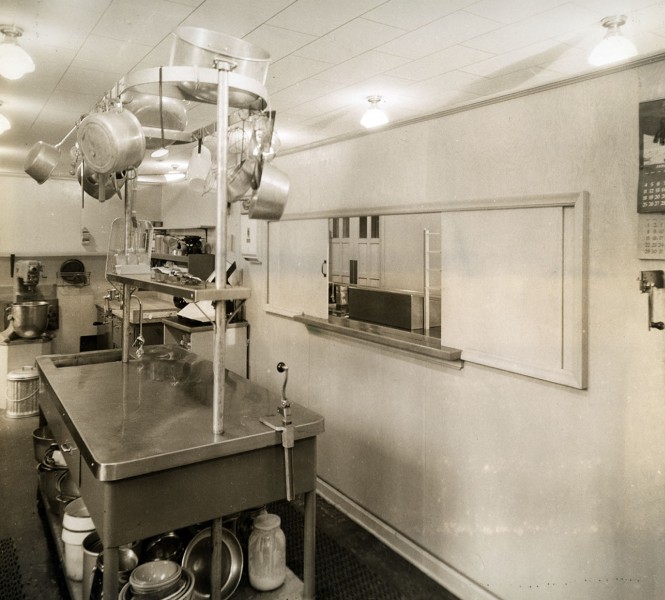 Located along the east side of the first floor next to the Commons are the kitchen and food services facilities, seen here in this 1942 view. In the northeast corner of the first floor was the apartment of Kathleen Cooper, manager of the Commons. (The dark brown floor tile in this room, now a storage room, was originally seen throughout the building, including the Commons). The first floor also contained a YMCA room, probably located in the northwest corner. Later this room was used to display paintings from the Abby Williams Hill Collection, and today it is a modern seminar room. 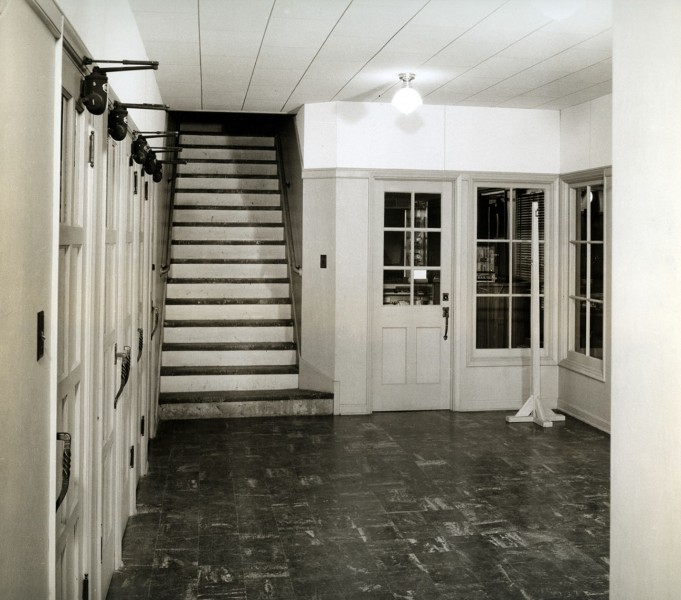 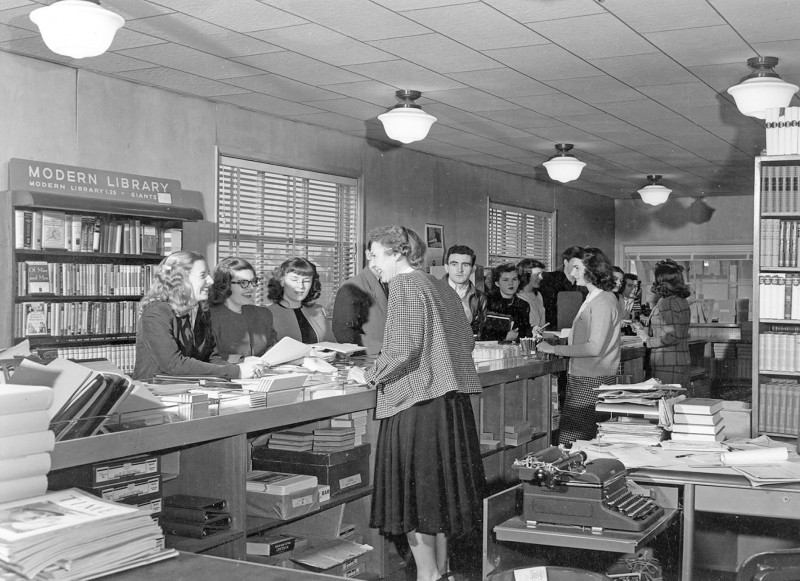 The college bookstore was located in the southwest corner of the first floor, where the art department offices and hallway are located. In this 1942 view above, the doors at left open into the Commons. The door at the right center is the entrance to the bookstore. The main Lawrence street entrance is out of the picture at right. In the 1948 view above, popular bookstore manager Lela “Shifty” Schiffbauer waits on students. The windows face Lawrence Street. 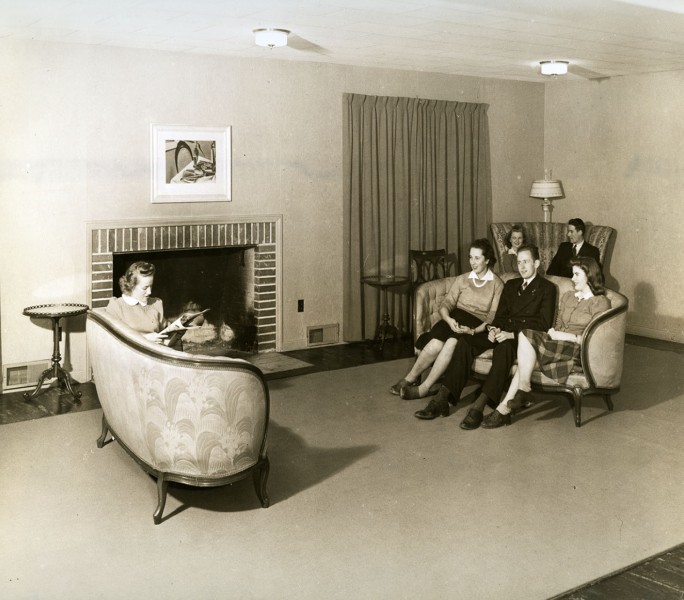 The Commons opened onto a carpeted student lounge on the north end. Sliding doors were used to close the lounge off from the Commons, but sometimes to feed large groups, dining tables were extended into the lounge area. Today the student lounge is part of the Kittredge Gallery. Although the original fireplace has been wallboard over, it is still there, and its chimney is clearly visible from the outside. This view shows the student lounge when the building opened in 1942. 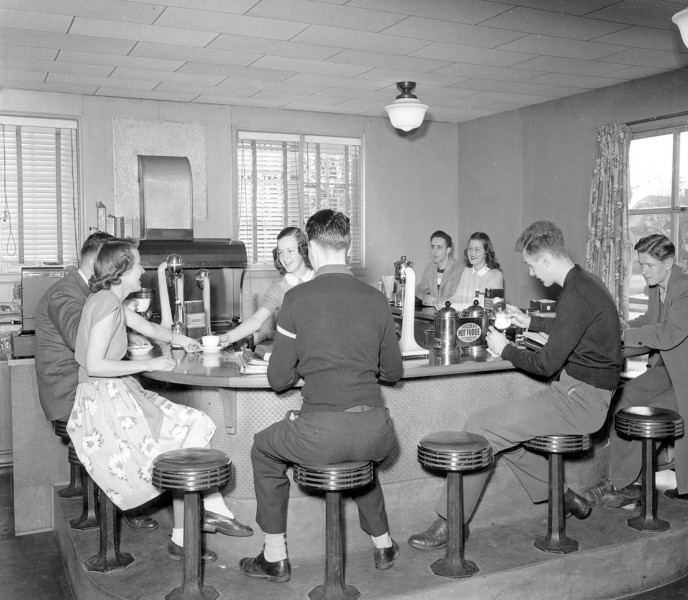 A popular soda fountain was located in the southeast corner of the first floor. The window at right in this 1945 view looks onto North 15th Street. The ductwork between the two east windows vented the soda fountain’s grill to the outside. Three of the stools seen in this photograph reside today inside Wheelock Student Center’s porticoed northwest entrance. 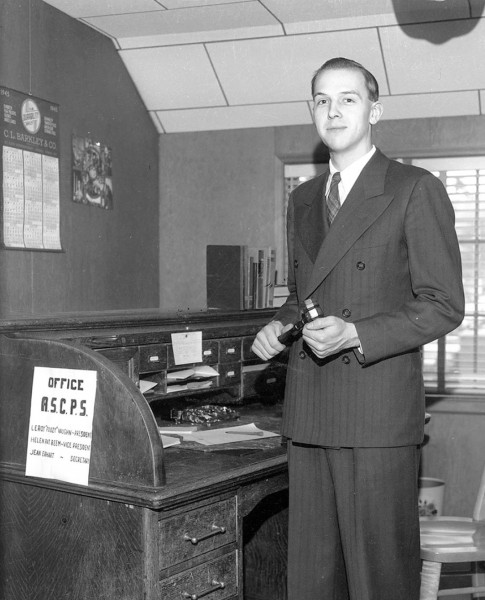 Much of the original 1942 interior was finished with plywood donated by manufacturers eager to display this new building material just coming onto the market. In this view, LeRoy “Foozy” Vaughn, 1944-1945 ASCPS President, stands in his second-floor office paneled with plywood. Although the original plywood may still be seen here and there, it mostly hides behind wallboard installed for fire safety reasons. 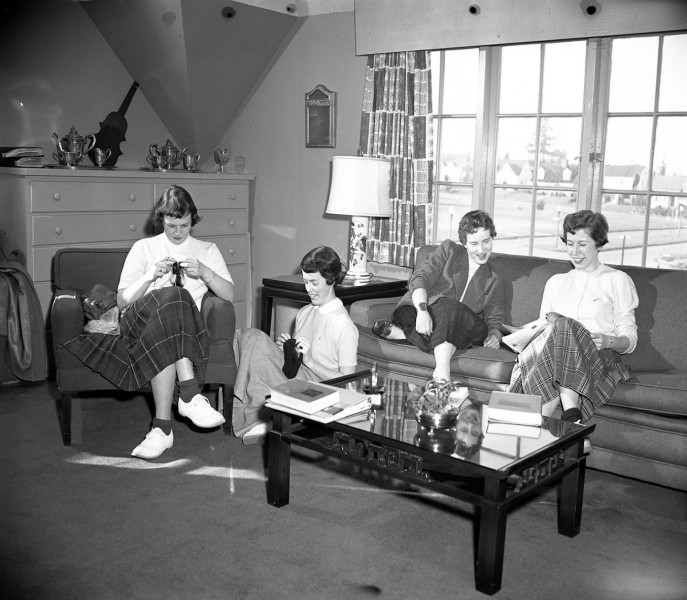 Each of the four sororities had a chapter room on the second floor in Kittredge Hall. In this 1955 view, Pi Beta Phi sorority sisters relax in their chapter room in the northwest corner where the drawing and design lab is today. A drawing held 30 September 1941 established sorority chapter room assignments for the entirety of Kittredge’s eighteen years as a student center. Alpha Beta Upsilon (became Delta Delta Delta) occupied the center room of the north side; Delta Alpha Gamma (became Chi Omega) occupied the northeast corner room; Lambda Sigma Chi (today’s Alpha Phi) had the southeast corner room, and Kappa Sigma Theta (today’s Pi Beta Phi) had the northwest corner room. 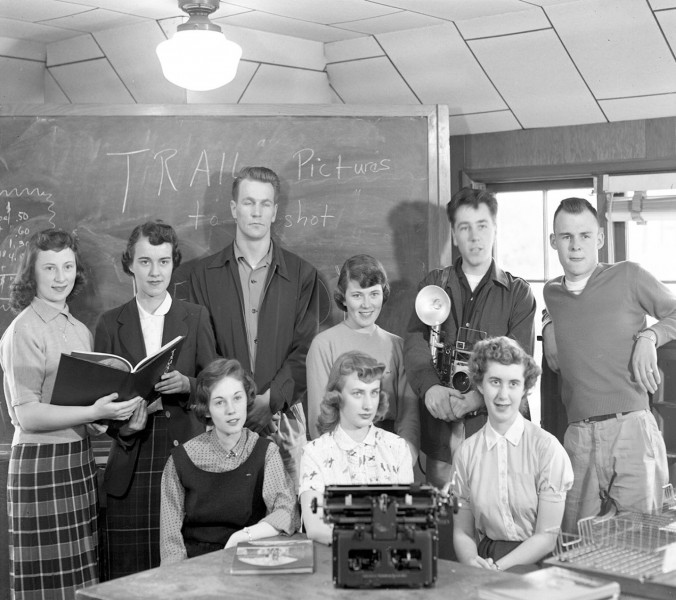 The white rectangular ceiling tiles that remain throughout much of Kittredge are original from 1942. The tiles are shown in this 1955 photo of the Tamanawas yearbook staff in the publications workroom located in the southwest corner on the second floor. In the photograph are seated from the left: Kay Englehart, Roberta Elson, and Karen Mortensen. Standing: Tamanawas editor Evalyn Emert and Bonnie Jordahl, holding a copy of the 1954 Tamanawas, business manager Wally Simms, Dorothy Johnson, photographer Irving (Buzz) Demarest, and Don Nagley. 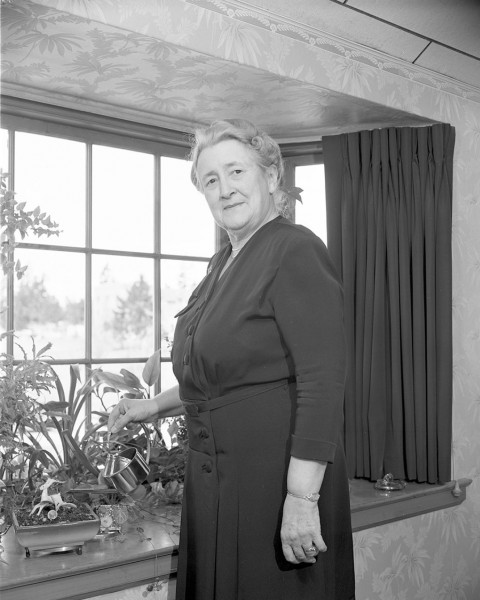 On the Lawrence Street side of Kittredge, a bay window projects from the second floor. This was the dean of women’s apartment. The Dean of women between 1931 and 1953, when she retired, was Lyle Ford Drushel ’12, seen here standing at the bay window watering her plants in 1952. In addition to ASCPS student government offices, the student publications room, Dean Drushel’s apartment, her office, and the four sorority chapter rooms, the second floor originally also contained a YWCA room, a Kappa Phi room (for Methodist-preference women), a small dining room for 8-10 people, and two rooms housing two women students each.
Throughout the second floor, many of the doors are original, as is the molding line at the tops of the doors.

Under the east half of the building, the basement contained a forced-air oil-burning heating plant, a laundry room, and a room housing two men students. A 1960 proposal to expand the basement to include a theater for 376 people was scrapped.

Acknowledgments
Associate professor of art history Linda Williams contributed to this guide, as did Laura Edgar, curator of the Abby Williams Hill collection and administrative assistant in the art and art history department.

Images are courtesy of Archives & Special Collections, Collins Memorial Library, University of Puget Sound. They are included in the university’s online historical digital image collection, A Sound Past, accessible at pugetsound.edu/asoundpast.