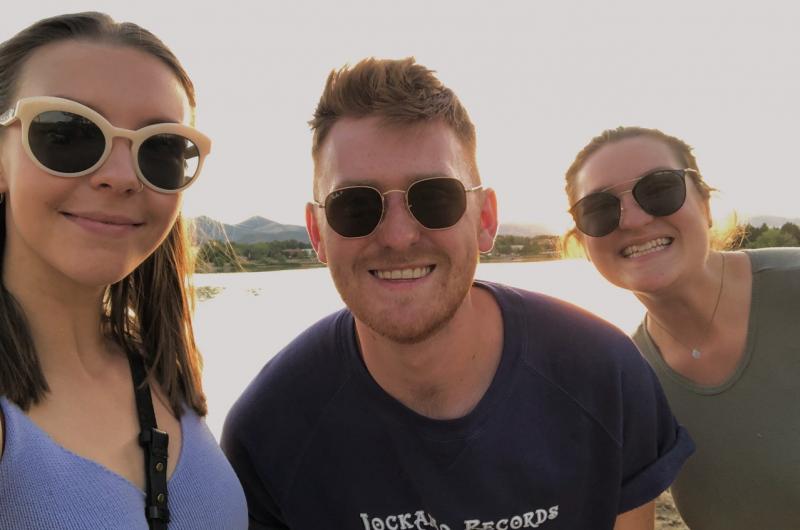 Walker Hewitt '19 (Painting) is participating in an artist residency at Bread and Salt, San Diego, CA in November, 2021.

Ian Chandler '18 (Sculpture) is an Artist in Residence at the Holter Museum, Helena, MT.

Michael Fortenberry '20 (Sculpture) is a finalist in the Season 15 Manifest Grand Jury Prize.

Sophia Munic '19 (Sculpture) was an emerging artist in 2019 at the Franconia Sculpture Park in Shafer, MN.

Walker Hewitt '19 (Painting) is entering the School of Museum of Fine Arts/Tufts post-baccalaureate program with a scholarship.

Ian Chandler '18 (Sculpture) will begin earning an MFA at the University of Wisconsin, Madison this fall (2019). He received full funding and will be the supervisor of the woodshop. 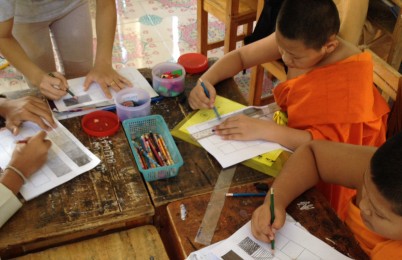 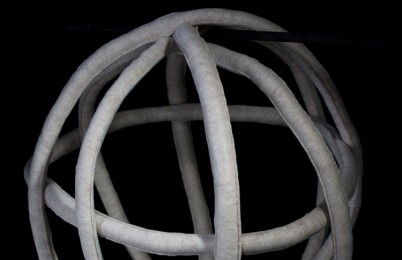 Rachel Kalman '16 (Painting) and Matt Hufford '16 (Painting) both completed their MFA degrees in spring 2019.  Rachel graduated from Washington University, Saint Louis and Matt from Boston University.  See examples of their work and information in their links, and images in the gallery above.

Gaby Yoque '16 (Printmaking) also completed her MFA thesis this past spring (2019) from California College of the Arts; the Graduate Fine Arts Exhibition was held in March at Minnesota Street Project in San Francisco. She is currently doing another installation using the same prints.

Carolyn Corl '15 is currently a candidate in the Master of Landscape Architecture program at the University of Oregon. Carolyn shares “my art background (especially the precision of printmaking) has served me incredibly well in this program.”  This summer, Carolyn is also doing a landscape architecture residency at the Overlook Field School in Waverly, Pennsylvania.

Priscilla Dobler '09 had a solo exhibition, La Cocina, at Method Gallery in Seattle from September 14-October 27, 2018; had an art show in Seattle at ArtXchange Gallery in Pioneer Square, November 2017; was awarded a two-month art residency at Mass MoCA; in 2018, she had her first solo show in Seattle at Method Gallery showing La Cocina (Kitchen installation with audio recordings); exhibited La Sala (Living room installation with audio and video projections) at Feast in early 2018; received the fall 2016 artist residency at Marfa Contemporary; she received her MFA in Sculpture from SUNY, New Paltz.

Ariel Scholten '10 (Painting) is currently a Master of Architecture student at the University of Washington.  She exhibited her paintings at Atelier Drome from October 4, 2018-January 31, 2019. She won third place in a competitive national architecture design contest.

Alexander Keyes '10 (Sculpture) had a solo show at Method Gallery, Seattle, WA (2018); displayed work in Shunkpike’s Seattle Storefronts Project, Seattle, WA; participated in Treat America Project, Treat Gallery, New York, NY; had an Artist-in-Resident Exhibition with Dakota Gearhart at Flutter Studios October 2016; recently exhibited his work titled "to: europa" at Gallery 4Culture in Seattle, WA; was the Resident Artist at the University of Texas, El Paso; received his MFA in Sculpture from the University of Oregon; had a sculpture displayed on Tollefson Plaza in downtown Tacoma during the summer of 2010; was awarded the prestigious *International Sculpture Center’s Outstanding Student Achievement in Contemporary Sculpture Award for 2010.

Lianna Hamby '17 (Painting) was accepted into the University of Washington’s Museology Graduate Program.  She began her master's degree in fall 2018.

Haley Andres '14 (Painting) was a 2014-15 Watson Fellow. Her project, Art as Therapy: A Cross-Cultural Exploration of Art-Based Trauma Recovery brought her to six countries on four continents. She is currently working as a Graduate and Fellowship Associate at the Posse Foundation.

Alison Grimm '12 (Sculpture) received her MFA in Sculpture from Wayne State University in Detroit. She was awarded a Graduate Teaching Assistantship by the university, assisted a professor with a sculpture class, and taught her own class in Spring 2015. She also exhibited her work in a juried show at the Mid-America College Art Association's biennial conference in Detroit, Michigan. The exhibit ran August 3 - October 6, 2012, at Wayne State University's Elaine L. Jacob Gallery.

Kyrianna Bolles '18 was employed by Tacoma Art Museum as a Museum Educator and Teaching Artist.

Dina Mustakim '16 is earning an MFA in Production Design (building film and TV sets for the most part) at Chapman University in Southern California.

Aaron Badham '11 (Sculpture) accepted a tenure-line position in the Department of Art at Hastings College in Nebraska where he will be the Sculpture Area Coordinator. In June 2014, Aaron was awarded the prestigious *International Sculpture Outstanding Student Achievement in Contemporary Sculpture Award. His work was in the October 2014 issue of Sculpture magazine and on the International Sculpture Center website. He received his MFA in Sculpture from the University of Massachusetts Dartmouth. Aaron was also one of sixteen of the best up-and-coming artists selected from hundreds of applications who have been invited to showcase and sell their cutting-edge work, in the exhibition UNTAPPED Emerging Artists Competition, in Toronto, Canada, March 1-4, 2012.

Jonathan Steele '14 (Ceramics) accepted an adjunct position at Lane Community College in Eugene, OR. He attended the MFA at Oregon College of Art and Design. He served as the adjunct ceramics instructor (2018), and hadn’t made a figurative piece since he was a student—then he was asked to teach the class. Read all about it in Puget Sound Stories!; while at Pleasant Hill Pottery he was featured in Ceramic Arts Daily; he exhibited work “Legacy Emergent,” at Blackfish Gallery.

Haley Shoemaker '17 (Printmaking) is a Teach for America volunteer in Tulsa, OK.

Grace Best-Devereux '16 (Sculpture) worked in the Seattle Art Museum's communications department; was admitted into Seattle University's MA in Arts Administration program and to Sotheby’s Institute of Art in London.

Olivia Turner '15 was admitted to DePaul University and University of the Arts - Philadelphia's MAT programs.

Grace Dyer '10 was admitted into the Savannah College of Art and Design and University of Illinois at Chicago MFA in Industrial Design programs.

Gloria Treseder '08 recently completed her MFA at the University for the Creative Arts in Canterbury, Kent. While in Canterbury she engaged in a number of multi-media installations and a couple of public art commissions including, “Traveller’s Joy!” mural on Canterbury East Rail Footbridge.

Jordan Meyers '14 (Ceramics) made and supplied the pints for Imminent Brewery in Northfield, MN.

Molly Gallagher '12 was accepted into the animation M.A. program at Savannah School of Art & Design.

Dana McGinnis '10 exhibited her cyanotype prints at The Bottlehouse located in the Seattle neighborhood of Madrona.

Maia Raeder '16 had a summer internship at the Sitka Center in Oregon from June-September 2016.

Peter Stanley '09 (Sculpture/Politics and Government) was appointed to the Metro Parks Culture and Heritage Advisory Council. He also currently serves as Gallery Manager of Kittredge Gallery, University of Puget Sound.

Erica Rochelle '14 (Chinese focus in Asian Studies-Art Minor) was accepted into the MFA program at New York Academy of Fine Art for painting.

Dan Hodges '07 (Sculpture) received his MFA from Applied Craft & Design Program at the Oregon College of Art and Craft and is building furniture and designing products for fishing.

Isaac Lewin '11 (Printmaking) is an MFA candidate at San Jose State and was recently profiled at Los Retratos.

Bianca Jarvis '15 (Printmaking) is an MFA candidate at the Minneapolis College of Art and Design (MCAD).

Julia Blitch '08 (Sculpture) received her MFA in Sculpture from the University of New Mexico.

Whitney Hanlon '08 (Sculpture) received her MFA in Sculpture from the Claremont Graduate University.

Sarah Koik '07 is the founder and a board member of an artist residency program in Mendocino County, California called Project 387.

Ben Sample '13 was awarded the 11th Annual Library Senior Art Award for his sculpture work titled "Progress". This piece was displayed in the Collins Memorial Library on the UPS campus for one year.

Eden Ferry '11 attended graduate school at the University of California, Berkeley, in the Landscape Architecture program.

Jenni Denekas was accepted into the MFA in Applied Craft and Design Program at the Pacific Northwest College of Art in Portland, Oregon.

Coree Affleck '05 was accepted into the graduate program at the University of Delaware with a full scholarship and stipend.

Kelby Schweitzer '12 interned at the Tacoma Art Museum and department alums Lauren Faulkner and Peter Reilly both work in the curatorial department at the museum.

*The International Sculpture Center (ISC) established the annual “Outstanding Student Achievement in Contemporary Sculpture Award” program in 1994 to recognize young sculptors and to encourage their continued commitment to the field.  It was also designed to draw attention to the sculpture programs of the participating universities, colleges and art schools.  The award program’s growing publicity resulted in a record number of participating institutions; including over 176 universities, colleges, and art school sculpture programs from sixteen countries for a nominated total of 445 students.  A distinguished panel made up of artist and educator Creighton Michael, curator Rocio Aranda-Alvarado, and artist Oliver Herring selected twenty winners and fifteen honorable mentions through a competitive viewing process of the works submitted.  The selection of the winners from a large pool of applicants, including international students, is a great accomplishment and testament to the artistic promise of the students’ work. The twenty award recipients participated in the Grounds For Sculpture’s Fall/Winter Exhibition, which was on view from October 10, 2010-January 2, 2011 in Hamilton, New Jersey, adjacent to the ISC headquarters.  The artist’s work was included in Grounds For Sculpture’s 2010 Fall/Winter Exhibitions Catalogue and featured in the October 2010 issue of the International Sculpture Center’s award-winning publication, Sculpture magazine as well as on the ISC award-winning website at www.sculpture.org.