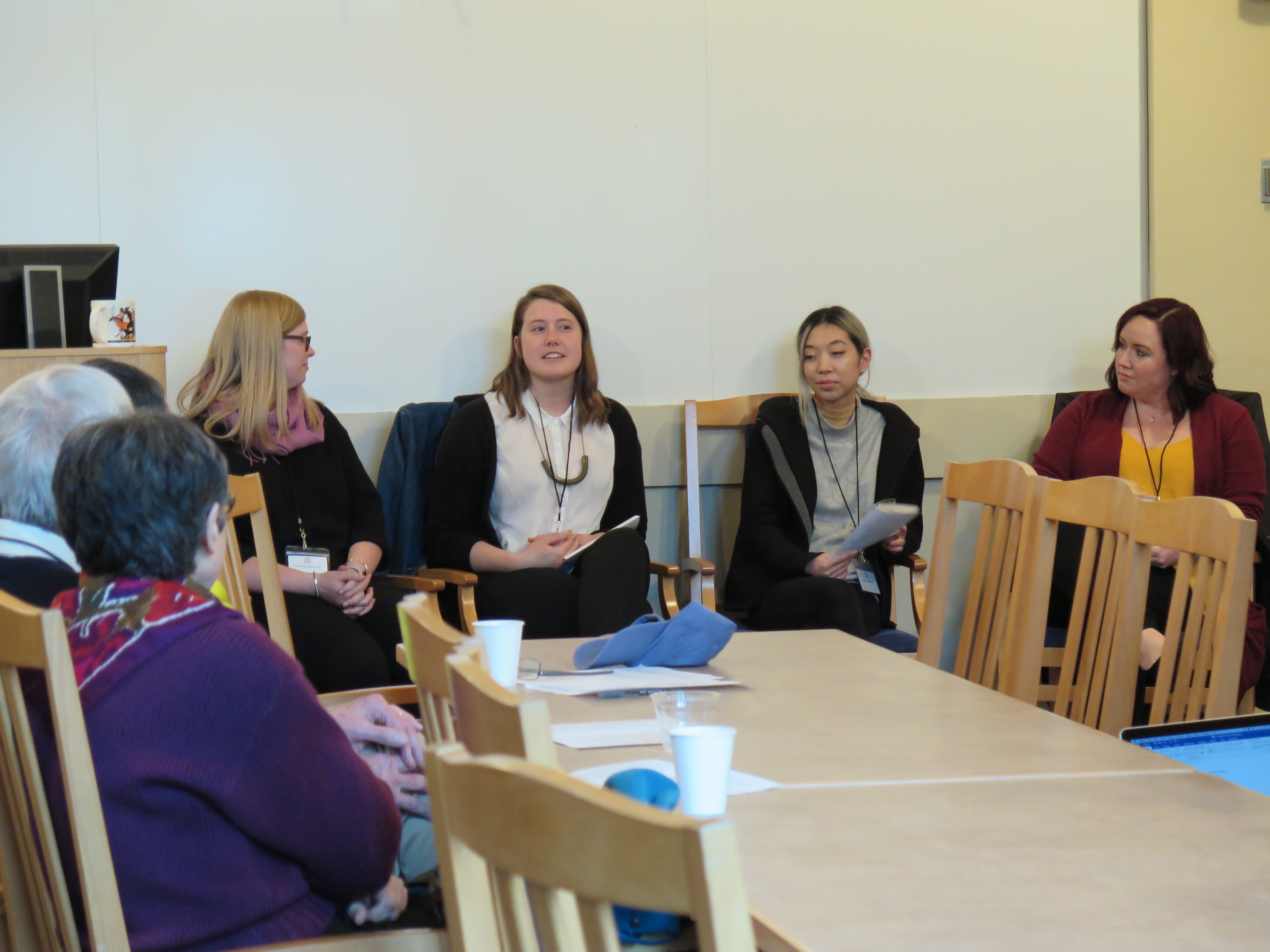 Ayse Hunt ’19 is pursuing a joint PhD in Computer Science and Learning Science at Northwestern University. She completed a Curatorial Summer Internship at the Living Computer Museum in Seattle in 2019. She also presented a paper entitled, “Digital Strategies and Access in the Art Museum” at an international conference “The Art Museums in the Digital Age” at the Belvedere Museum in Vienna, January 2019.

Learn More
Rachael Stegmaier ’21 presented a talk at the Undergraduate Research Symposium at the University of Washington in May, 2021, titled: "Siqueiros and Modernism in the Americas."

Lenna Soifer ’19 has been accepted to the M.A. program of Sotheby’s focused on Fine, Decorative Arts and Design in London.

Sarah Johnson ’19 served as Museum Assistant and the Tacoma Historical Society and as Museum Intern at the Snoqualmie Falls Hydroelectric Museum in 2019.

Mary Thompson ’19 is pursuing an M.A. degree in art history at Hunter College. She worked as Gallery Assistant with David Lusk Gallery in Memphis, TN after completing a Summer Internship with Smarthistory, affiliated with Khan Academy.

Hannah Lehman ’17 is working as Gallery Teacher at the San Jose Museum of Art.  She works with school groups that visit the museum, and designs and leads lessons, tours, and discussions about the artworks in the museum’s exhibitions and permanent collection.

Elsa Woolley ’15 has recently taken a position as a Development Assistant focusing on architectural historic preservation with the St. Charles Town Company in Denver, Colorado.

Brendan Balaam ’14 served as a curator at the Tacoma Historical Society.  He earned an MLitt degree in Material Culture & Artifact Studies from the University of Glasgow.

Ben Block ’14 is working as a software developer at Tyemill in Seattle.

Jordyn Jones ’14 earned a law degree at Seattle University in 2017.

Tosia Klincewicz ’14 presented a paper, "On Display: Curating the Works of Julia Margaret Cameron", at the Gender Studies Symposium held at Lewis and Clark College in Portland, Oregon in March 2014.

Lucas Sokolsky ’14 participated in the Art Summer Residency Program in Europe in Summer 2014 with three studio art students, traveling to Budapest, Leipzig, and Berlin to study contemporary art.  The program is funded by an anonymous donor; Currently Gallery Associate at Jules Maeght Gallery in San Francisco.

Joelle Luongo ’13 held the position of Curatorial Intern in Summer 2013 for the African collection of the Seattle Art Museum; Currently Program Assistant of the National Arts and Humanities Youth Program Awards in Washington, D.C.

Emily Bolton ’12 earned an M.A. in Library and Information Science at the University of Washington and is working as the company librarian and music assistant for the Seattle Opera.

Kelsey Eldridge ’12 has passed her General Exams and is now at the stage of ABD (all but dissertation) in the Ph.D. program of the Department of the History of Art and Architecture at Harvard University. She was awarded a Graduate Fellow position for Fall 2018 at the Villa i Tatti, The Harvard University Center for Italian Renaissance Studies in Florence to pursue research on her dissertation entitled, Imitations of Empire: Porphyry Sarcophagi in Byzantium and Beyond.

Katherine Havlik ’12 is attending the University of Utah School of Psychology Ph.D. program

Tristan Needham (née Zabenko) ’12 earned an M.A. degree in Graphic Design and Art Direction from the Savannah College of Art and Design. She is working as a freelance Art Director.

Westrey Page ’12 is pursuing an M.A. degree in art history at the Freie Universitat in Berlin. She participated in the Congress-Bundestag Young Professionals Exchange Program in 2012-13, a competitive fellowship program offered to seventy-five young Americans each year.  The program offers university training followed by an internship of the candidate’s choice in Germany in order to develop intercultural exchange between young Americans and German professionals.

Michelle Reynolds ’12 accepted a position in the Marketing Department of the Tacoma Art Museum in 2019.  She competed an M.A. degree in Art History and Museum Studies at Syracuse University in 2016 and worked as Curatorial and Programming Coordinator at Wellin Museum of Art at Hamilton College from 2016-2019.

Samantha Barry (Howarth) ’10 earned an M.A. degree in Art History at American University. Was Manager of Training at the Newseum, Washington, D.C.; Currently is the Visitor Services Coordinator at Smithsonian Institution, National Air and Space Museum in Washington, D.C.

Zoe Fromer ’10 earned a Master of Arts in Teaching at Lewis and Clark College, Portland, OR.

Rebekah McKay ’10 started the Ph.D. program in classical archaeology at UC Berkeley in fall 2017.  After earning an M.A. degree in Archaeology at the University of Exeter, she worked as GIS Technician and Lab Technician at the U.S. Geological Survey and served as a Teaching Assistant at UC Davis in the Department of Classics.

Katie Ferguson ’09 earned an M.A. degree at the Fine and Decorative Arts Program of the Sotheby’s Institute of Art in London. She works as Human Resources Manager at Fine Arts Museums of San Francisco.

Andrew Griebeler ’09 was awarded a Getty/American Council of Learned Societies Postdoctoral Fellowship in Art History for 2021-2022 for his project titled: Medusa Underground: An Occult Icon in Byzantium. He completed a two-year postdoctoral fellowship in art history at USC after earning his Ph.D. at the University of California, Berkeley with a focus on Byzantine art in May 2019. He won first prize in the 2012 student essay competition of the International Center of Medieval Art (New York, NY) for his paper: "Picturing Time and Eternity in Sixth-Century Ravenna."; Awarded a two year fellowship (2014-2016) from the Samuel H. Kress Foundation to pursue his dissertation research at the Kunsthistorisches Institute in Florence; Awarded a three-year (2016-2019) David E. Finley Fellowship of the CASVA (Center for Advanced Studies in the Visual Arts) intended for research and travel in Europe related to his dissertation on Byzantine manuscripts of herbal medicine. The fellowship also provided a year-long residency at the Center to complete the dissertation and carry out curatorial work.  Andrew was also awarded a Dumbarton Oaks Dissertation Fellowship (declined) and a Townsend Fellowship from UC Berkeley (declined).

Rachael Pullin ’09 is a Curatorial Intern at the Whitney Museum of American Art. She earned an M.A. degree in Art History from American University.  Rachael also served as curatorial and education intern at the Smithsonian.

Ashley Dowden ’08 completed an M.A. at the Art Business Masters Program of the Sotheby’s Institute of Art, New York, NY.

Sarah Lippai ’07 earned an M.A. degree in Art History with a specialization in Roman Art at the University of Washington.

Scott Valentine ’07 earned a Master of Design degree at the Harvard Graduate School of Design. He is working as Product Marketing Specialist for Google via Artech Information Systems.

Theresa Kutasz Christensen ’06 was recently appointed a Kress Research Fellow at the Detroit Institute of Arts. She completed her Ph.D. in Art History at the Pennsylvania State University in fall 2018 and accepted the Kress Postdoctoral Fellowship in the Department of European Paintings at the Detroit Institute of Arts. Other achievements include: the Katzenberg Fellowship at the Smithsonian Institution’s Freer and Sackler Galleries where she worked with Islamic manuscripts in the summer of 2006; the Archives of American Art of the Smithsonian Institution in 2006 where she curated an exhibit of recent acquisitions featuring the papers of ceramicists Robert Chapman Turner and Toshiko Takaezu; a Fulbright Fellowship to Stockholm to carry out work on her dissertation entitled, “Queen Christina of Sweden and the Politics of Antiquities Collecting in Early Modern Rome.”

Amy Peterson ’06 earned a Master of Science degree in public health at the London Graduate School of Tropical Medicine; Currently pursuing a Ph.D. at the University College London Institute of Education (2015-2019); Director of HIV prevention at ETR Associates.

Pamela Jaynes (nee Haynes) ’03 received an M.A. degree in Art History from the University of Washington in 2005. She runs her own art appraisal company in Seattle (Jaynes Appraisals).

Brenda Longfellow ’94 received her M.A. in art history at the University of Washington and her Ph.D. in classical art and archaeology at the University of Michigan. She is an associate professor at the School of Art and Art History of the University of Iowa. Her book Roman Imperialism and Civic Patronage: Form, Meaning and Ideology in Monumental Fountain Complexes (Cambridge: Cambridge University Press) was published in 2011. In 2012, she received the Rome Prize Fellowship in Ancient Studies at the American Academy in Rome to research a book she has tentatively titled Past Lives, Present Meanings: Reused Statues in Imperial Rome. The book considers why ancient Roman emperors from Augustus to Constantine incorporated older statues into their newly built monuments and how these new ensembles impacted the developing Roman sense of identity.