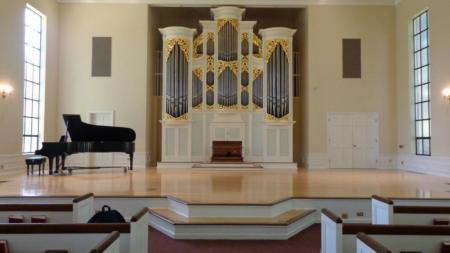 "My belief is that the more elaborate and ornate an instrument, the more enhanced the experience to listen to it is. In other words, we hear with our eyes."

The organ in Kilworth Memorial Chapel is named in honor of Bethel Schneebeck whose generosity has enriched the artistic and cultural life of the University of Puget Sound and the community.

Paul Fritts and Company modeled the Bethel Schneebeck organ after ancient pipe organs from the early Baroque period. Small village chapels throughout northern Germany and Holland house ancient pipe organs. These organs' pipes, stop and key mechanisms, and valves remain unchanged and functional today, having outlived numerous changes in technology styles and advances. These organs have stood the test of time. To listen to one being played is to hear the echoes of centuries past when the joy of listening to a magnificent fugue or sonata was a treasured rarity.

Paul Fritts, an alumnus of the University of Puget Sound, Class of 1973, built his first organ in 1978 and Paul Fritts and Company organs have since become known and respected throughout the world. The Bethel Schneebeck Organ, built-in 1990, was the largest and most intricate of his creations. From the shaping of the pipes to the final touches on the ornate cabinet, each level of construction was customized for Kilworth Chapel.

As you enter Kilworth Chapel, your attention is drawn to the 20-foot tall facade of pipes and delicate gold scrollwork above a dwarfed bench and keyboard. Despite the organ’s stately appearance, grandeur, and intricacy, its power as a musical instrument is contained.

To come to Kilworth Chapel and view the organ is in itself enjoyable, but the Bethel Schneebeck Organ truly comes to life when played. As you listen to the organ’s music, let your eyes follow the curves and rolls of scrollwork around the pipes. Enjoy the harmony of the music created by combining sight and sound. Please visit links to the UPS School of Music to learn more about upcoming public performances on the Bethel Schneebeck Organ.

The Henry Vollmer family of Eastern Washington presented the Kilworth Chapel Bell. According to Dr. R. Franklin Thompson, the Kilworth Chapel bell was cast in 1718 in Sheffield, England, as a signal bell on the steamship Frontier and was owned by "Father" J.H. Wilbur, a famous Methodist clergyman. Its first use was as a church bell in the Taylor Street Methodist Church in Portland, Oregon, from 1850-68, and later served churches in the Walla Walla and Waitsburg areas. The bell became the property of Gustav Vollmer when he purchased the old church in which it hung. His family subsequently used it as a dinner bell. The chapel bell waited in a warehouse for 20 years before it was taken out of retirement for its service to Kilworth Chapel at the University of Puget Sound. The bell marked its 300th year in 2018.

The bell in Kilworth Chapel calls the community both to worship and to work, to celebrate the eternal values in faith, and to meet to apply them to fresh situations as they are discovered again.

The "Little Chapel" in Jones Hall was named Gail Day Chapel on June 7, 1950. It is now located within Kilworth Chapel. Mr. and Mrs. E. Vern Day dedicated the chapel to the memory of their daughter, Puget Sound alumna Gail Pauline Day, after her accidental death.