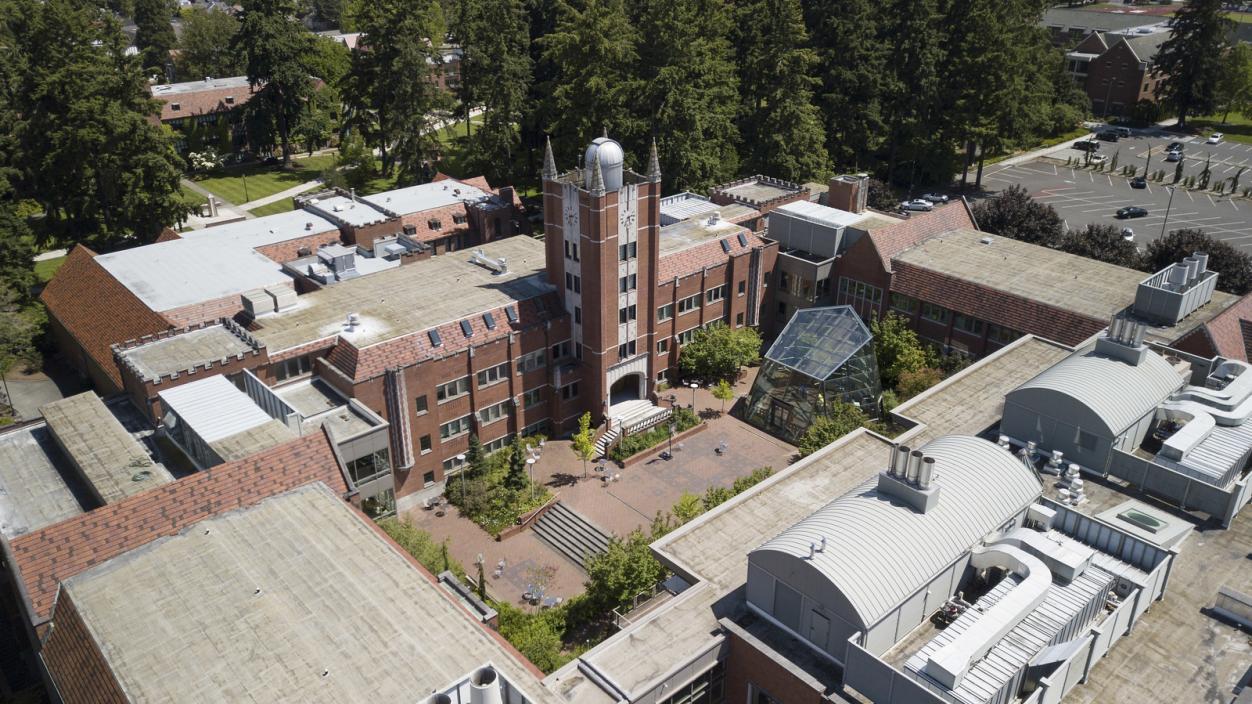 Designed to meet the U.S. Green Building Council’s LEED Silver standards, using sustainable materials and adhering to stringent environmental guidelines, the 51,000-square-foot Harned Hall facilitates the contemporary study of science and encourages creative interaction among faculty and students, particularly at the intersection of various scientific disciplines. A key feature of Harned Hall is Science on Display, a series of physical installations and artistic representations of the principles of science, mathematics, and technology throughout the building. Thompson Hall, built in 1967, was named by the Board of Trustees in honor of the university's tenth president, R. Franklin Thompson.

From the model of a juvenile whale suspended as if midswim that beckons visitors into Harned Hall’s main lobby, to the tile representation of Pi in binary code planned for the third floor of Thompson Hall, the Science Center at Puget Sound serves as a gateway to the worlds of exploration and discovery.

But “Science on Display” is not just a term to describe skeletons and wall art. It is a philosophy of teaching, learning, and integrating the study of science into the very experience of walking through the building. At every turn, visitors of the Science Center will encounter exhibits, puzzles, and spaces that bring elements of the physical world to life. Here, the study of science is tangible. Each brick in the courtyard demonstrates a mathematical principle. Each decorative mosaic showcases nature’s order. Each artistic rendering of a biological, mechanical, or environmental principle engages the mind and ignites the imagination. We invite you to learn about the science on display at Puget Sound. 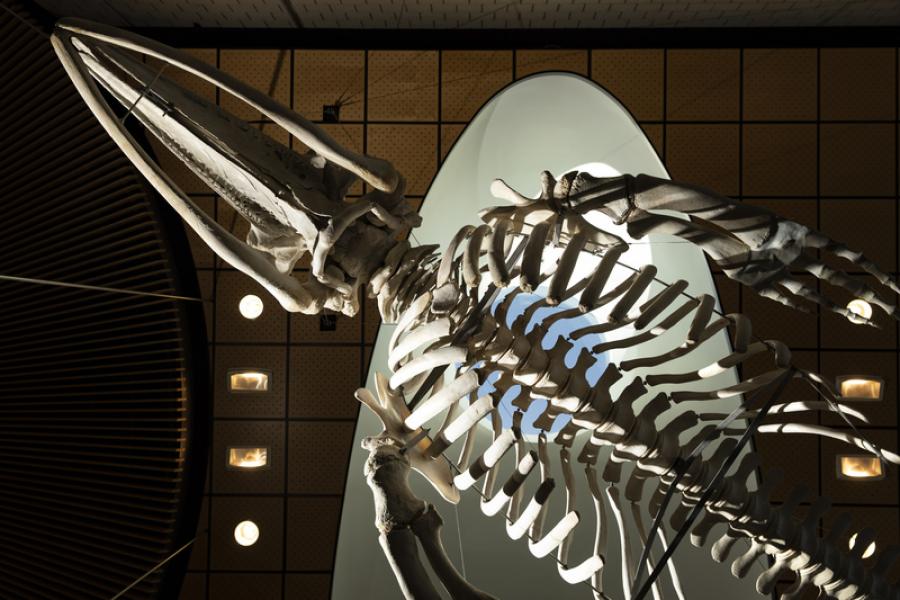 In March of 1973, a young male gray whale was found dead near the mouth of the Columbia River near Chinook, Wash. Twenty-seven feet in length and weighing close to six tons, the 14-month-old whale probably died while migrating north from Baja, Calif. The entire skeleton was recovered and donated to the Slater Museum of Natural History to be displayed as part of the museum’s permanent collection and now hangs suspended between the first and second floors of the main lobby of Harned Hall, greeting visitors as majestically as if welcoming them to the depths of the Pacific Ocean.

For more information on the juvenile gray whale, see the Slater Museum page. 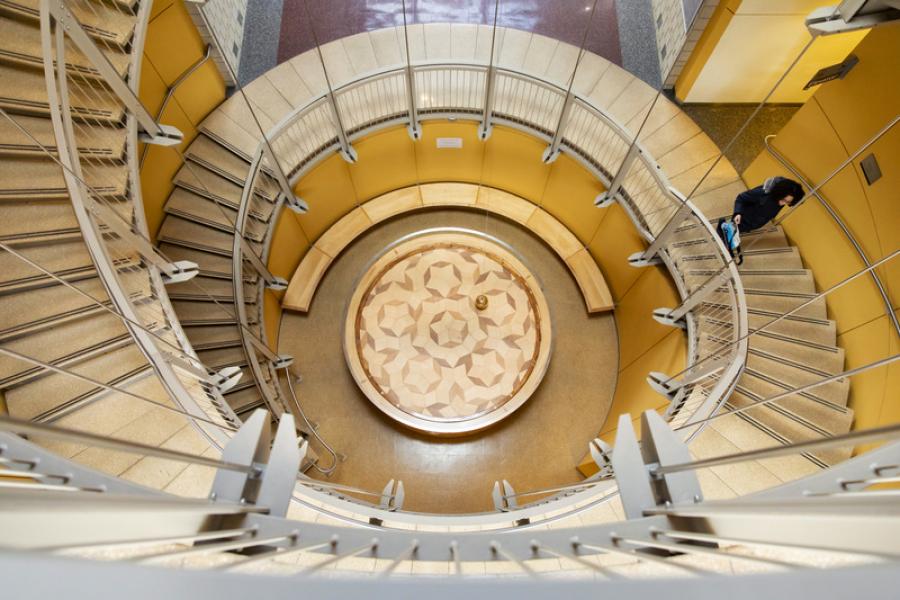 In the mid-19th century, French physicist Jean Foucault (foo-KOH) became the first scientist to demonstrate the rotation of the earth using laboratory apparatus instead of astronomical observations. In 1851 he shared his pendulum demonstration with the public at the Parthenon in Paris, where it can still be viewed today.

The Foucault pendulum at Puget Sound is located in the center of the spiral staircase in Harned Hall’s main lobby. Hung from the ceiling of the third floor, the cable pendulum is suspended over a base with inlaid wood in a beautiful Penrose pattern. The pattern is named for British physicist and mathematician Roger Penrose, who, in the 1970s, developed sets of shapes to tile a surface in regular, but nonrepeating patterns. The university's pendulum base was designed and constructed by Professor of Physics Alan Thorndike.

How does it work?

All pendulums consist of a cable (or wire, or string) and a “bob,” a symmetrical weight at the bottom. The cable and bob are suspended over a base, called an oscillating plane, which remains stationary. When the cable is set in motion, it will swing back and forth in the same direction unless pushed or pulled in another direction. This is due to one of Newton’s basic laws of nature: a body in motion will remain in motion unless acted on by another force. Yet, if you watch the pendulum for any length of time, it appears as though the pendulum changes direction. This is an illusion. The “stationary” base (and everything else connected to the earth) is really what’s moving, rotating around Earth’s axis every 24 hours. The result is stunning, visible proof of the earth’s rotation.

With each swing, friction, air currents, and other forces cause all pendulums to lose energy, and the Foucault pendulum at Puget Sound is no exception. Left to itself, the pendulum would swing in ever smaller arcs until its movement decreased almost entirely. To keep the pendulum going, a small motor has been installed in the ceiling to give the cable a little “kick” when it reaches a particular point in its swing. This restores the energy that has been lost and prevents the pendulum from stopping. The “kick” has no effect on the direction of the pendulum’s natural swing, so the demonstration of the earth’s rotation is unaffected. 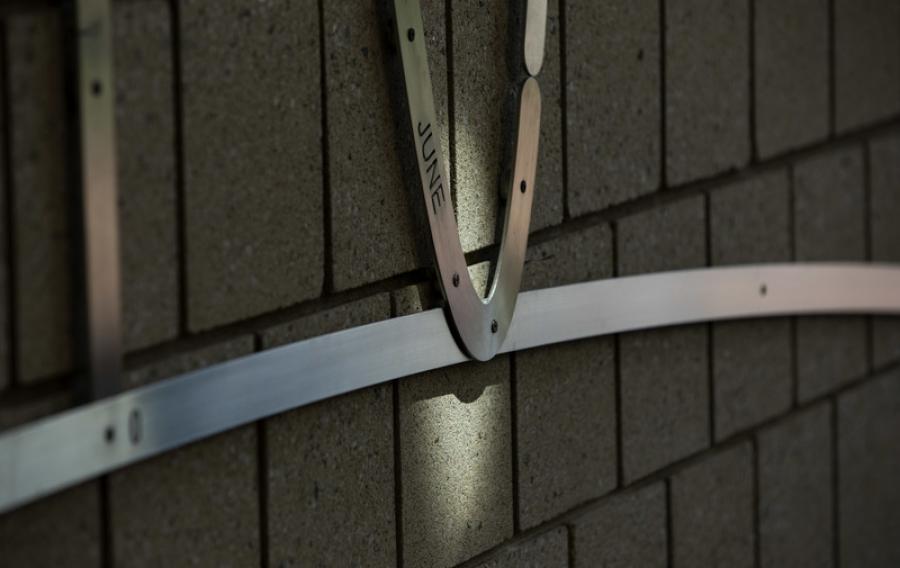 The sun’s position not only varies higher and lower (north and south) in the sky, as expected with the change of seasons, but also slightly left and right (east and west). Designed and engineered by physics professors Alan Thorndike and James Evans, the analemma in Harned Hall is a clock and calendar that uses the reflection of the sun’s rays to determine date and time.

How does it work?

Installed on the right wall of the main lobby, reaching from the entry floor to the third-floor ceiling, a steel cable runs in a lop-sided figure eight to plot the path of the sun during the year. In the dome directly above the main entry of Harned Hall, a mirror reflects the sun’s rays at high noon (when the sun is highest in the sky) onto the wall with the analemma installation. Depending on where the sun’s reflected rays land on the cable figure eight, the analemma will indicate the date. Similarly, as the rays fall on arcs and notches marked on the wall behind the cable, approximate time may be determined.

A two-story, glass-walled colonnade runs the length of Harned Hall overlooking the courtyard and entry to Thompson Hall. Mounted on the interior wall of this colonnade are two mosaics divided in half by the floor of the building’s third story. Constructed of 4-inch square tiles, the mosaics are artistic representations of the golden rectangle and the orbits of the planets in our solar system around the sun. From far away, the colorful tiles create beautiful works of art; from a mid-distance, the principles they represent become clear; and at close range, the designs become abstract again and return to beautiful wall art.

What’s really fascinating about the golden rectangle is that when the points dividing golden rectangles into squares are connected, a logarithmic spiral is revealed. The same spiral is created in nature in the many "apartments" of the chambered nautilus. This spiral is one example of what is known in mathematics and geometry as a fractal, a shape or pattern that appears similar at all levels of magnification. Another example of a fractal is the Science Center’s courtyard.

The Orbits of the Planets

For thousands of years, the mysteries of the heavens have fed the imagination and fueled the exploration of space. The second of the Science Center's two-story mosaics captures that quest in a depiction of the orbits of the planets, inscribed over a view of the Puget Sound region from space. Steel cables trace each planet’s orbit around the sun. 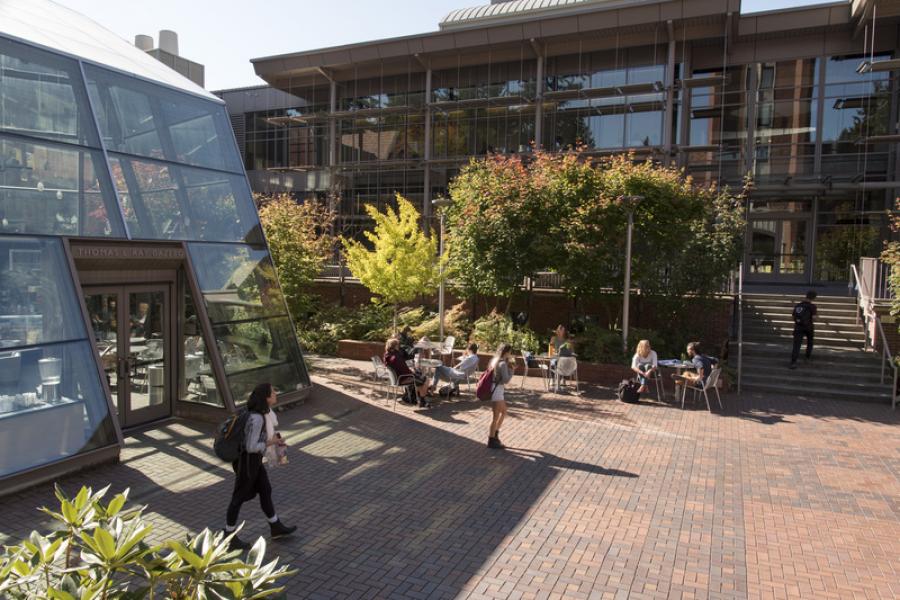 The construction of Harned Hall joins the north and south wings of Thompson Hall creating a 10,000-square-foot, mulitlevel courtyard.Landscaped with native foliage, the Brown Family Courtyard houses a research garden, a water feature, study and gathering spaces, and a dramatic glass gazebo cafe in the shape of a crystalline structure. The gazebo contains the Oppenheimer Cafe, offering light fare and Fair Trade coffee.

The courtyard floor makes up one of the Science Center's largest Science on Display installations.

Stretched over the bricked floor and patio of the 10,000-square-foot, multilevel Brown Family Courtyard is a very specific geometric pattern known as Sierpinski's Carpet.

First described by Polish mathematician Warclaw Sierpinski (1882-1969), the pattern is formed by dividing one square into nine congruent squares in a 3-by-3 grid, then removing the center square. The same procedure is applied to each of the remaining eight squares and repeated infinitely. Sierpinski’s Carpet is classified as a fractal, a shape that appears similar at all levels of magnification. A fractal is also represented in the spiral created by the golden rectangle.

A visit to the Science Center at Puget Sound is essentially a treasure hunt for creative demonstrations and artistic representations of the principles of science, mathematics, and technology. Not only are those principles embodied in larger-than-life, featured displays, but they are also tucked away in corners of hallways and camouflaged in the floor tiles. Once renovated each story of Thompson Hall will house a unique puzzle conceived and designed by Puget Sound faculty members for visitors to find and unravel.

Running along the wall, built into the floor tile pattern, the geology department has designed a timeline measuring Earth’s significant geological events from the birth of the planet to the present, highlighting each age and era in between. On the second floor, running the length of all three Thompson Hall wings, the biology department has created a color-coded representation of a DNA sequence, assigning each amino acid its own color. Faculty members in the math department have converted the constant Pi into binary code, their tile representation bordering the third floor wings of Thompson Hall.

Visitors to the upper-level rooms and wings of Thompson Hall will be met with two additional Science on Display puzzles. The chemistry department has created symmetry character tables. These tables demonstrate how a particular shape (square, sphere, etc.) behaves as it is acted upon (rotated, enlarged, etc.) Also look for a Greco-Latin Square from the math department. This is a pattern (traditionally represented by the letters of the Latin and Greek alphabets) where only one element of each type is allowed in each row and column, and each pair of elements is only allowed once in each square. For example, here is a 3-by-3 Greco-Latin Square using capital and lower case letters as the two “alphabets”: 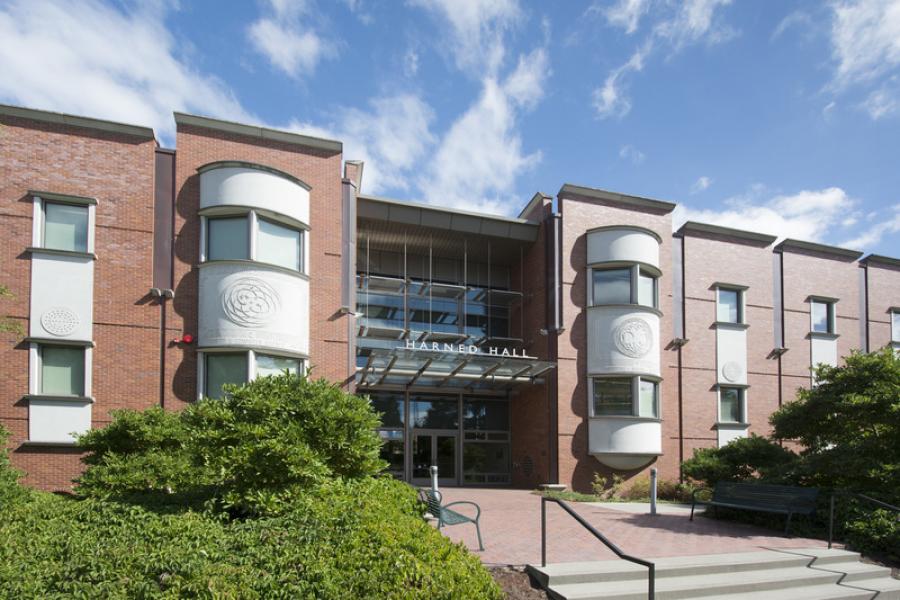 Guests of the Science Center at Puget Sound who enter the main lobby of Harned Hall from Union Avenue are witnesses to the remarkable care given to each detail of the building’s design, down to the cement panels embedded into the building’s front facade.

The flat panels are cast with what look like the same design of rings and spheres. Actually, each panel is slightly different, as each is representative of one atom of a heavy element. Heavy elements, formed by the nucleosynthesis inside stars, are essential for the formation of planetary systems and the evolution of life. At the center of each panel is the element’s nucleus, surrounded by rings (showing the atom’s electron orbits) and spheres (electrons).

Framing the building's entrance are two curved cement panels cast with ancient and modern patterns. One is a Celtic image called the Tree of Life, a symbol significant in nearly every studied culture. With its roots reaching deep into the earth and its branches stretching toward the sky, the Tree of Life dwells in three realms—hell, earth, and heaven—and is a link between the past, present, and future. Trees have long been a symbol of the most basic life-giving force: a renewable source of sustenance, shelter, and fuel.

The second curved panel shows a spirograph. Amazingly, the pattern is created when the relative motion of Earth and Venus are charted, and is called the Dance of the Planets. Both curved panels are framed by the Greek Key, an ornamental design of arranged vertical an horizontal lines often seen in Classical art and architecture and, incredibly, a design very similar to the folding patterns of proteins.