Musical theater is a passion of Michael Buchanan '99. Even before enrolling at Puget Sound, he wanted to make it a part of his life. That is exactly what he has done. Brilliantly.

Michael graduated from Puget Sound with a degree in vocal performance, studying with Tom Goleeke. He was one of the founding members of Underground Jazz, which today has morphed into Underground Sound. At Puget Sound he was in a number of campus productions, such as Guys and Dolls and The Tenderland, but his stage work went beyond campus through work in summer stock at the Bigfork Summer Playhouse and elsewhere. After graduating and doing another summer season at Big Fork, he packed up his car and began the life of a peripatetic artist, taking work at theater after theater and sending videos around the country, looking for a break. Michael did regional theater around the country, and eventually decided to move with a friend to Los Angeles. When an opportunity arose in 2001 to move to New York City, he took it. He began working in small productions in the region and soon attracted the attention of management. From there things have simply kept going up.

Some of Michael’s credits: A two-year national tour of Miss Saigon; performances in Hair, Urinetown, The Fantastiks, West Side Story, Pirates of Penzance, You’re a Good Man Charlie Brown, Kiss Me, Kate, White Noise, Go-Go Beach, The Cure, Fat Camp, Forever Plaid, The Addams Family, and Cry-Baby; appearances at the Kennedy Center in Washington, D.C., the Guthrie and Mercury theaters in Chicago, and the Goodspeed Opera House in Connecticut.

Michael was part of first national tour of The Book of Mormon, and currently is booked in theaters across the United States and Canada through this coming August. Learn more about his upcoming performances via his YouTube Channel.

In 2006 as a cast member in the Chicago-based production of Urinetown, Michael won the “Jeff Award” for Principal Role in a Musical. At the pace he is going, it will be one of many accolades in his unfolding career. 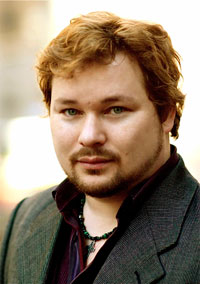 Robert McPherson '91:"I'm as local as you can get." While that may speak to growing up in Federal Way, Rob McPherson has gone well beyond his Pacific Northwest roots, now singing opera roles here and abroad. His story with Puget Sound begins two years before he matriculated, studying voice with Thomas Goleeke. While at Puget Sound he was a member of the Adelphian Concert Choir and participated in opera scenes recitals. Rob also became involved with theater productions both on and off campus, including a memorable portrayal of Mozart in the campus production of Peter Shaffer's play, Amadeus.

Rob has specialized to great success in fiendishly high and difficult music, such as that found in the roles of Arnold in Guillaume Tell, Ramiro in La cenerentola, and Lindoro in L'italiana in Algeri. He has been hailed by the New York Times for his "robust voice, agility and confidence." The Washington Post felt he "brought a clear, confident voice and a deft comic touch" to his role in L'italiana in Algeri. "He navigated Rossini's daunting pyrotechnics," continues the review, "with style and finesse."

Rob also has enjoyed recognition on the concert stage. He has joined the Seattle Symphony for performances of Handel's Messiah, and he made his national television debut on PBS as the angel Gabriel in Andrew T. Miller's sacred cantata, The Birth of Christ, recorded in Dublin, Ireland and released by Sony BMG Masterworks. He recently reprised that role in Rome at the special invitation of the Vatican.

A career now in full swing, Rob usually is booked at least one year in advance. He now splits his time between his Washington base in Federal Way and New York City - that is, when he is not on the stage.

Other alumni active in performance: