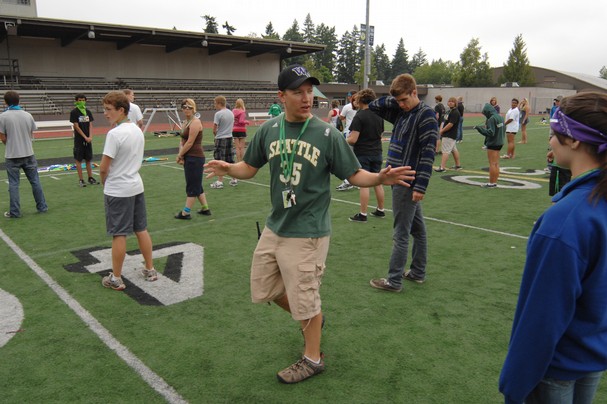 Justin Ehli '09, M.A.T. '10, Tacoma native has two passions: making music and enhancing students’ understanding of music so that they develop a similar passion.

Given this desire to share his love of music and to bring it to a wider audience, Justin chose to pursue a degree in music education at Puget Sound, followed by completion of the university’s Master of Arts in Teaching program. Currently he teaches at Stadium High School in Tacoma, Wash., where he directs the jazz band, concert winds, percussion ensemble, symphonic band, and wind ensemble.

Justin’s desire to instill a love of music in his students goes beyond his teaching duties at Peninsula. He actively supports his fellow teachers in area middle schools and seeks ways to increase the regional reputation and visibility of his music program through festivals and competitions. His desire to excel was evident during his studies at Puget Sound, where he sought opportunities to conduct the Wind Ensemble, Concert Band, and Brass Ensemble, as well as to become involved with the Tacoma Youth Symphony Orchestra and Puget Sound Youth Wind Ensemble.

Justin’s work as a music educator is more than just a job; it’s an opportunity to combine his passions—to make great music and to inspire others to do the same.

The year 2015 was a good one for Chris Burns ’10 (M.A.T.). He was the winner of not one, but two teaching awards: the Golden Apple award from his school’s Parent Teacher Student Association, and the University Place Teacher of the Year award. For any teacher, collecting these accolades in a career would be something. It is all the more telling that Chris received both in his fifth year of teaching.

Chris’s career did not begin in music education. Graduating with a performance degree in string bass from the New England Conservatory, he headed to Vienna on a Fulbright, where he studied for another two years. He returned to the United States and settled into a successful freelance career in Houston. He performed, taught privately, was a coach for the Houston Youth Symphony, and continued his own studies with Paul Ellison at Rice University. Yet he found himself drawn ever more to teaching, so when he and his wife relocated to Tacoma, he explored certification programs in the area, eventually enrolling in the M.A.T. program at Puget Sound. He landed a job after graduation in the Bethel, Washington school district. He now is now at the Narrows View Intermediate School in University Place, Washington.

Chris’s musical life runs the gamut. In addition to teaching at Narrows View, he is the Principal Bassist for the Tacoma Symphony Orchestra. He maintains a small studio of students, gives guest recitals, and has given master classes at such places as the University of Washington.

Chris says he enjoys getting his students excited about music. Listening to him talk about teaching, hearing the passion in his voice, and sensing the joy he receives from his work becomes infectious. No wonder parents, students, principals, past award recipients, and his peers selected him for two teaching awards. 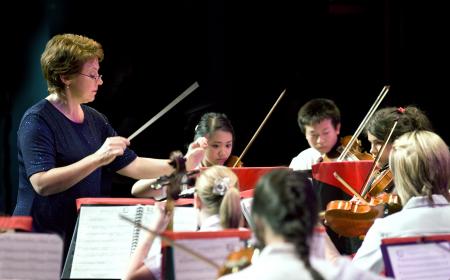 The only constant in life is change. This adage perfectly describes Michelle Waller’s fascinating career. She began in performance, completing two degrees at Juilliard, and then a D.M.A. in violin performance at University of Washington. In 1996 she began teaching violin and chamber music in Puget Sound’s community music program. She also periodically taught in an adjunct position in the undergraduate program, and she continued her work as a freelance artist, performing in regional ensembles and in a piano trio.

But that’s just the start of Michelle’s story.

Upon deciding to return to her native Australia, Michelle learned there were few opportunities for university-level teaching in the Outback, so she opted to share her gifts and talents with a slightly younger crowd. She completed the Master of Arts in Teaching program at Puget Sound, gaining certification to teach at the secondary level, and now is beginning her sixth year as head of the music department at Rockhampton Grammar School in Queensland, Australia.

Michelle admits that she has been “totally surprised” by how much she loves her work, despite it being a career choice she never planned on making. In fact her love of teaching has led her to ask critical questions about learning processes and to becoming involved with helping new instructors become better teachers. In addition to teaching music, she is the coordinator of Rockhampton’s Dimensions of Learning platform, a program in which she works with teachers and students to enhance and deepen understanding within the curriculum and beyond.

One thing is certain: Michelle’s desire to take on a challenge, to “learn something more,” and to be actively engaged in an evolving career will lead her to many places, some she may not even expect.

Rita Brown ’02 is a string specialist in the Salem-Keizer School District in Keizer, Oregon. Rita’s first teaching position after graduating from Puget Sound was in Tacoma, where her duties were split between Gray Middle School and Mount Tahoma High School. While the job itself was one she enjoyed, staffing issues within Tacoma School District presented their own challenges. After a Reduction In Force (RIF) cut her position at Mount Tahoma, Rita began considering other teaching opportunities.

During her second year at Gray Middle School, she learned of a teaching position for a string specialist for Salem-Keizer Public Schools in her hometown of Salem, Ore. Rita applied, was hired, and held the position at Houck Middle School for fourteen years before starting a role at Claggett Creek Middle School, where she is in her second year. From humble beginnings as a musical vagabond, Rita now has a full year ahead with visits to the Oregon Symphony, orchestra festivals, and college clinic visits. In her words, "Life moves so much faster than I ever thought it would, but it seems to keep getting sweeter every year."

Back in 2002, on the brink of graduation, Rita couldn’t imagine her current position. (She had planned to teach at the high school level.) Careers can take their own directions, however, and in Rita’s case, she has landed in a position she enjoys tremendously. Now, 16 years in her school district, she finds her fourth through eighth graders enthusiastic about learning, and she enjoys the process of guiding students to the point where they can synthesize a sheet of music and turn it into a beautiful performance. Rita’s not just teaching music, she’s training students to become musicians.

Some of the many alumni active in music education: