Assistant Professor Wind Dell Woods discusses the intersection of the two things he loves most.

When we caught up with Wind Dell Woods over the summer, he was stuck at home with his wife and 5-month-old daughter—and he didn’t seem to mind one bit. “It’s kind of nice being locked down,” he said. Though Woods didn’t start on his Ph.D. until his mid-30s, his work fuses two lifelong interests: theater and hip-hop. We asked him about his artistic inspirations, teaching theater during the coronavirus pandemic, and what he loves (and doesn’t) about Hamilton. 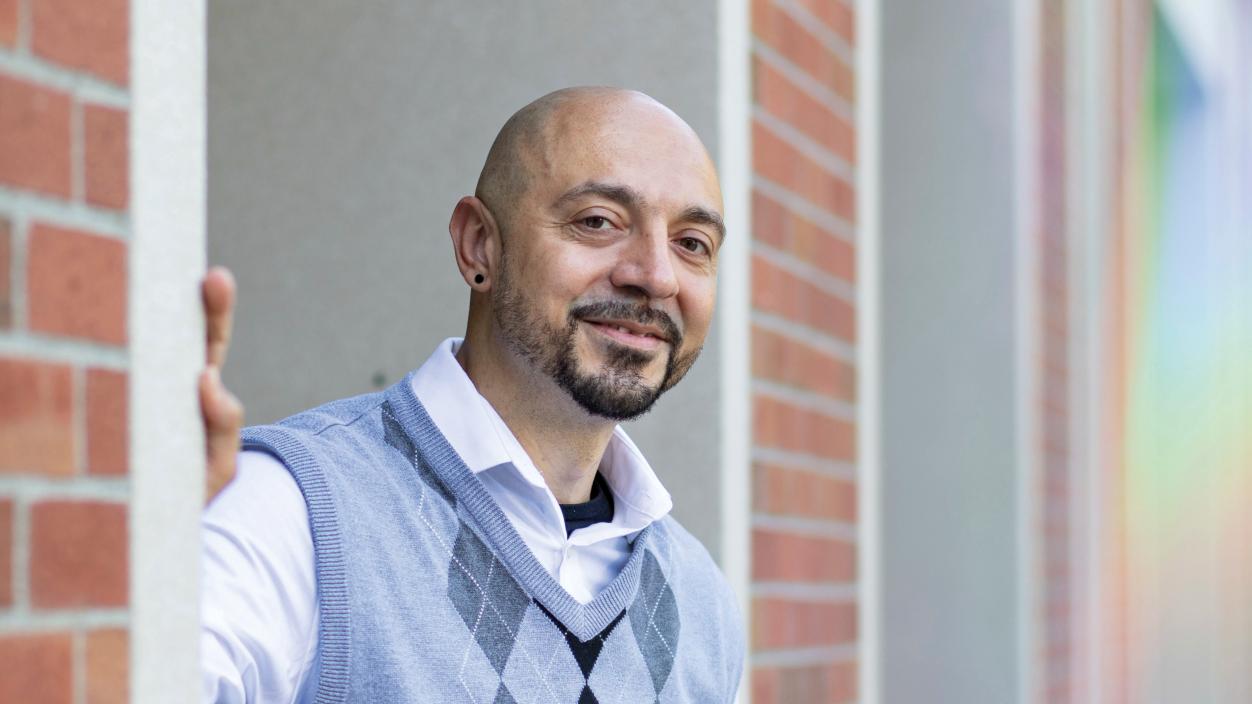 Q: What’s your background in hip-hop?
A: I’ve always been a fan. I grew up in Ashland, Ore., and I was influenced by Bay Area rappers: Tupac, Digital Underground, E-40. I had two older brothers who were listening to Ice-T and Tribe Called Quest, things that were rare for someone in rural Oregon to be exposed to. In high school, I formed a hip-hop group called Triphonix with a couple of friends. We got to open for acts who came through the region. I never considered myself a great emcee—I was more into poetry. I was kind of the hype man of the group.

Q: Where does a love of theater come in?
A: Ashland is home to the Oregon Shakespeare Festival, and I did some acting there as a kid. One of my mentors and father figures, J.P. Phillips, was an actor at the festival; he was the one who first got me into acting. Going on fishing trips and helping him memorize his lines was a huge influence for me. When I was 12 or 13, I got to meet August Wilson after a show. J.P. pointed out that he was a playwright; I thought all playwrights were dead. I went up and said, “Did you write this?” He said, “Yeah.” I said, “It’s really good.” I had no idea who this guy was.

Q: There’s a 10-year gap between your M.F.A. and your Ph.D. What happened there?
A: After I finished my M.F.A., I went to New York and started a small theater collective. I wrote plays, I struggled like you do as a young artist, and then I decided I would go get my Ph.D. I’d read an article on hip-hop theater, and read about some plays that were similar to the ones I wrote. They used samples [snippets of music from other sources], they used the same kind of language. I decided to write my dissertation on hip-hop theater—basically a blend of the two things I love the most.

Q: I’d guess the average theatergoer and average hip-hop fan might not see much overlap between the two. Where’s the connection?
A: Hip-hop in itself is very theatrical: You have people who take on aliases and perform as narrative characters through a medium that uses figurative language. Hip-hop theater really started coming into broader view in the early 2000s. Part of my dissertation was thinking about hip-hop as an aesthetic. And then I’m starting my dissertation right when Hamilton goes on Broadway, so now we have a mainstream art form that blends hip-hop and theater together.

Q: I have to ask about Hamilton. My impression is that the hip-hop aspect of it is a bit overblown.
A: The thing about Hamilton is that it feels like a play that’s hip-hop in aesthetic and content, but I wouldn’t say it’s the driving way of thinking. I have this term in my research of hip-hop being “sprinkled in.” But Hamilton employs it so well, it almost feels like hip-hop is central to it. It’s interesting to hear hyperbolic phrases like “Hamilton is the best thing to happen to hip-hop and theater.” Well, maybe theater, but not hip-hop. That’s where I would situate some of my criticism, and also my praise. It doesn’t really dismantle, or “dis,” the narrative of the Founding Fathers, but it does find ways to make connections between them—the braggadocio, the masculinity, the rags-to-riches story—and hip-hop themes.

Q: Your own work borrows from classic inspiration: Aaliyah in Underland, which you tied into your teaching this spring, was billed as a “hip-hop-inspired remix of Alice in Wonderland.”
A: I found this book called Black Alice, this really weird story from the ’60s, and I thought, What would a modern version of this look like? I went back and read Lewis Carroll, and I started writing the characters, recontextualizing it through hip-hop. As I was finishing it, I thought it would be interesting to have students work with a play that’s still being written and have conversations around that.

Q: And you did a virtual performance at the end of the semester, right?
A: We did, and the students were amazing. They tackled a lot of really in-depth stuff. We were able to have it livestreamed. I wanted the students to see how playwrights are always working in conversation with other plays and ideas. I had them read texts that I was thinking about when I wrote it: Beloved, The America Play, Dreamscape, Joe Turner’s Come and Gone. Once we had all that in our back pocket, I introduced my play, which kind of puts them all into a remix, and they were excited—“Oh, this line comes from this play.”

Q: As a Black artist, what’s your hope for how this art can address the current moment?
A: I think right now there’s a space where people can ramp up their politics, find those plays that are really politically charged and say, “OK, nobody’s making a lot of money right now; we can afford to make a political statement even if we don’t fill the seats.” I do have some faith in art, whether that’s theater or hip-hop, to push those boundaries, take us out of the real world, and imagine something better.

Johnson ’96, M.A.T.’97 teaches at the Grant Center for the Expressive Arts, part of Tacoma Public Schools, and emphasizes “geo-literacy” in his classroom; he uses Google Eart... 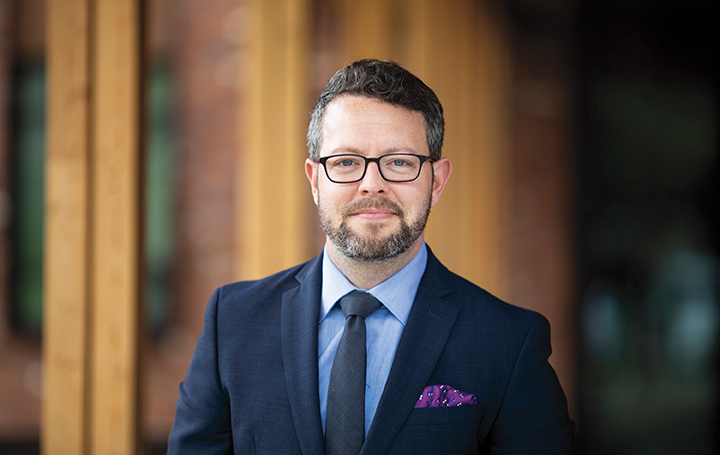 Matthew Boyce, Puget Sound’s new vice president for enrollment, has seen the admissions process from all sides, including time as a high school counselor with a nonprofit off... 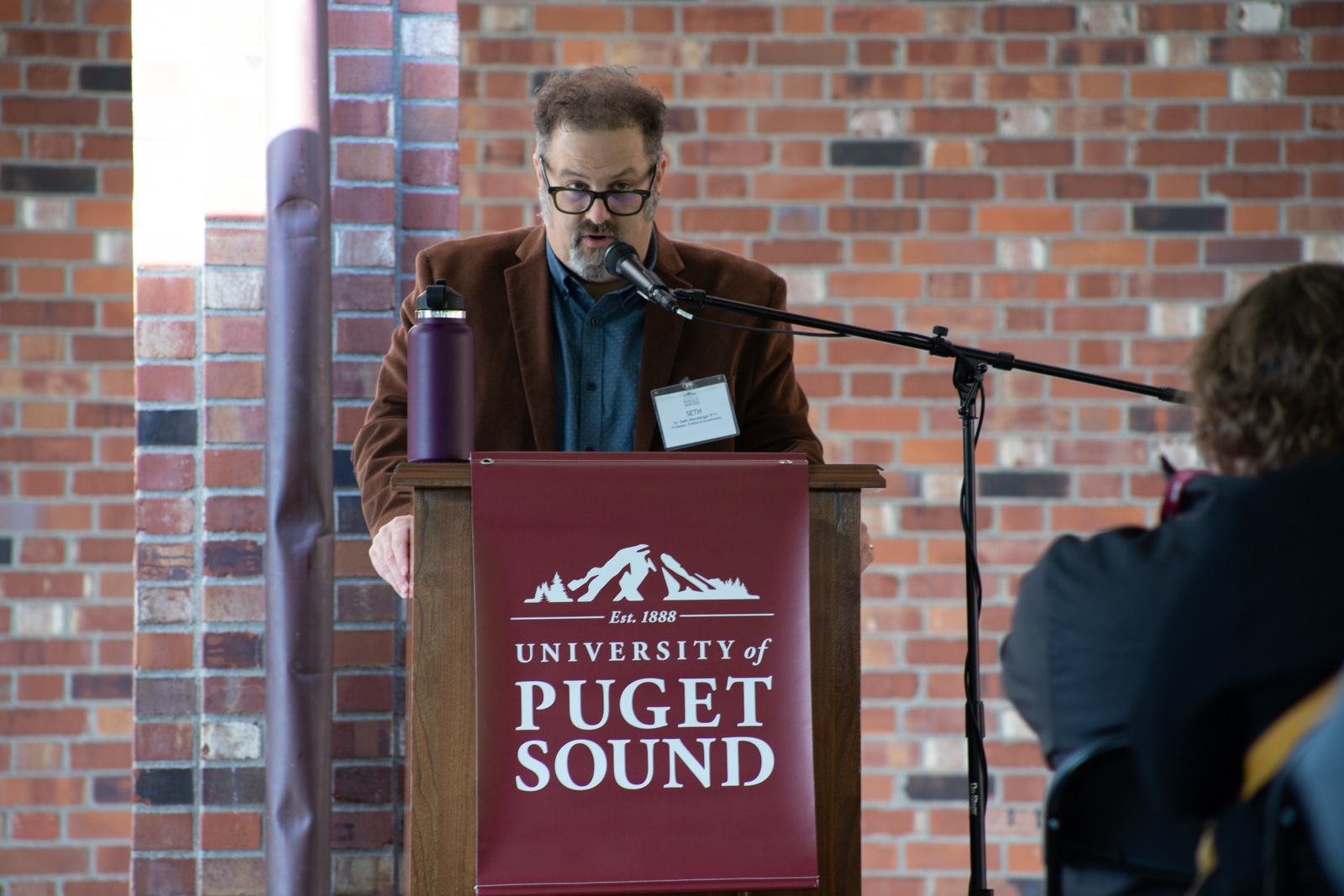 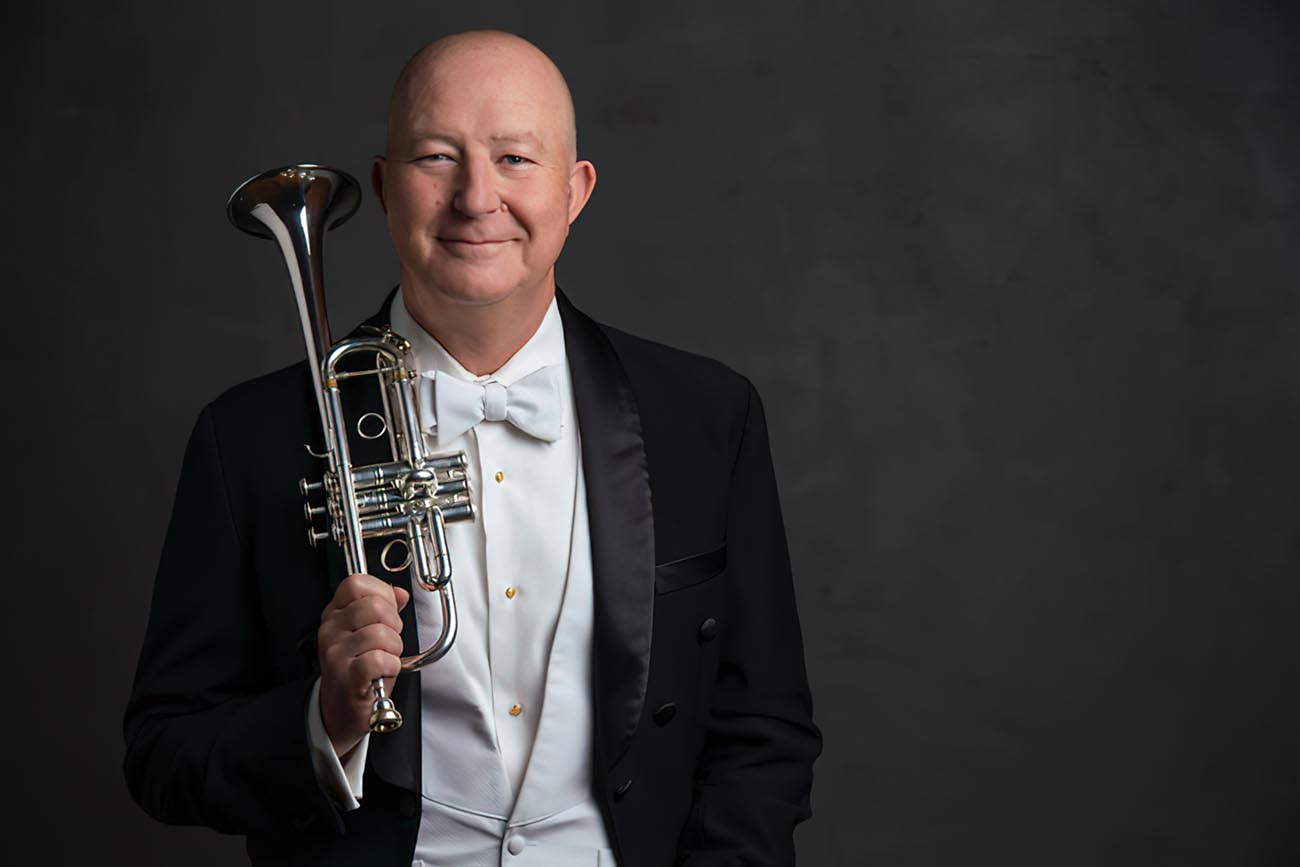 ALL IN THE FAMILY Neal Berntsen ’82 is one of three siblings to have studied music at University of Puget Sound.... 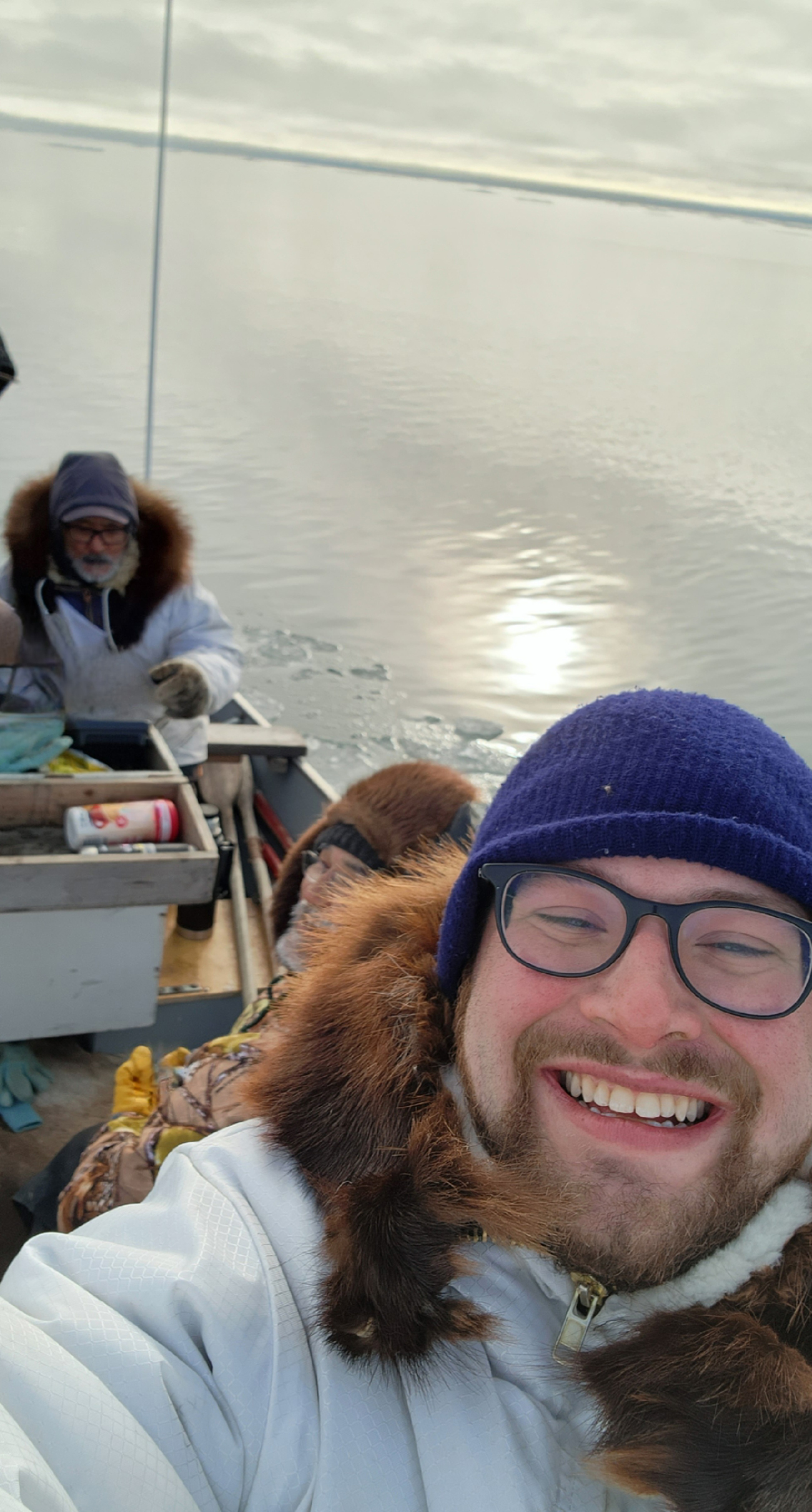 An IT Guy Above the Arctic Circle

Anton Edwardson ’14 (shown on the Arctic Ocean) is an IT entrepreneur in his hometown of Utqiagvik, Alaska. Ant...