In the winter of 1990, in her hometown of Anchorage, Alaska, Gwynne Kuhner Brown ’95 popped a cassette of her piano music into an envelope and sent it to several music schools in the Pacific Northwest. She had no idea what lay ahead.

Over the next four years, she studied under a world-class pianist, Duane Hulbert, at the University of Puget Sound. As a first-year student she was “badgered into excellence” by a senior who convinced her to practice for five hours a day, and she graduated feeling burned out. 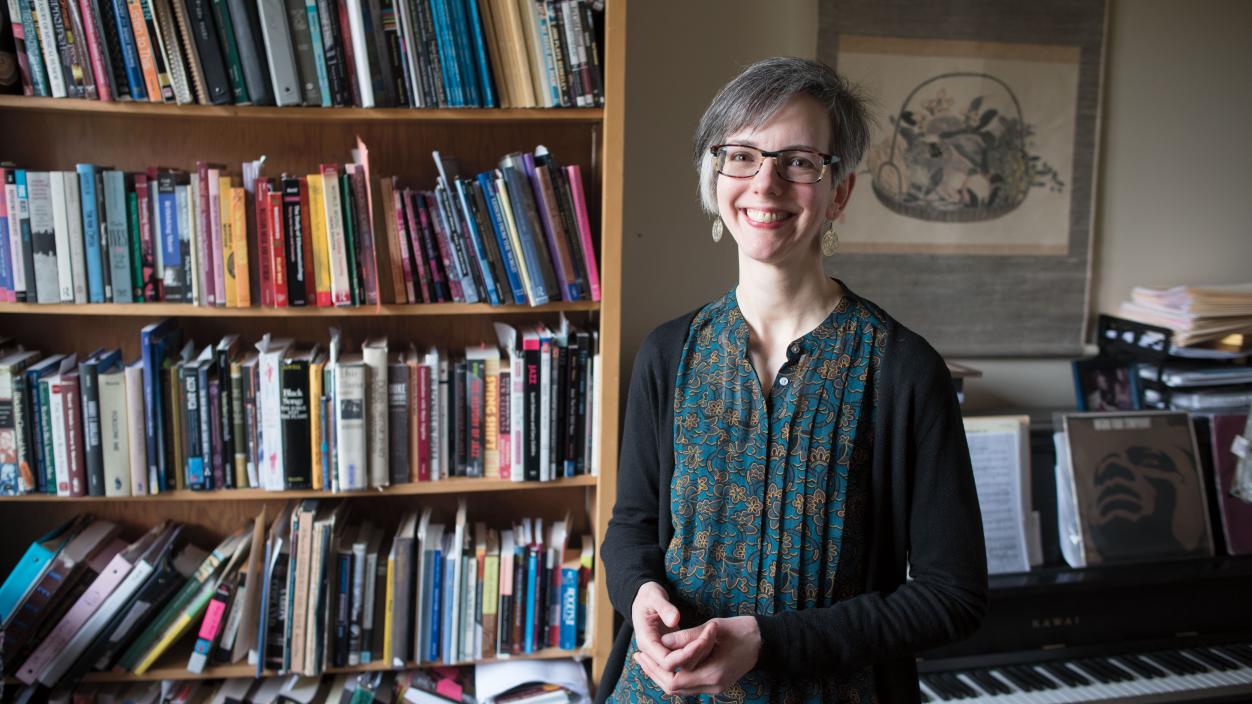 Gwynne’s desire to explore the intellectual side of music attracted her to music theory. When she went to Indiana University for her master’s degree, however, she found the field too abstract. Unsure of her path, she spent a year working in a transitional housing program for formerly homeless women in Chicago. It was a powerful experience, but she was missing something. “Being outside of academia made me realize that I belonged in academia,” she says.

She attended the University of Washington for her doctorate, and is now a tenured associate professor of music history and music theory at Puget Sound. In 2013, she received the President’s Excellence in Teaching Award. She’s also doing research on African American spirituals and composer William Dawson—work that has led her into the deep and challenging waters of equity and social justice. I spoke with her during winter break.

Q: How did music become a huge part of your life?
A: I was a musician, I think, from the beginning. I have really strong memories of playing a little xylophone and being upset because it’s only an octave, from C to C. My dad got me a cheap upright piano when I was 5, and I started piano lessons when I was 6. It never occurred to me not to be a musician.

Q: What sparked your interest in spirituals and African American classical music?
A: I wrote my dissertation on race and gender issues in Porgy and Bess. The Broadway show’s first choral director, in 1935, was Eva Jessye, in New York City, who was black and female. She stuck to this production for 40 years [and] told journalists that she was working on a book. So I went to her two archives to see if there was a manuscript. Instead I found a lot of correspondence. In one letter composer Jester Hairston wrote something like, You’re all I have, Miss Jessye, now that Hall has gone. I see William Dawson so seldom. So we are the only three old-timers left who are dedicated to keeping the spirituals alive. I said, who are these people?

So I went and looked at the Hall Johnson materials. I looked at the William Dawson materials at Emory University. Once I saw those, I put a bigger project aside to work on Dawson, because the materials were just so magnificent, and his story is so interesting. I’m writing a book. I would love for his story to be known, his music. The choir music, a lot of it, is known. But he also wrote a symphony that is a brilliant work. I think it’s equal to Dvořak.

Q: What drew you along this winding path?
A: Initially, just pure curiosity. But then, as I started to look at African American composers, I came to appreciate the enormity of their contribution, and the shameful neglect they have faced and continue to face. I think African Americans who have composed so-called classical music fall between the cracks. Scholars interested in classical music tend to focus on white composers. Scholars interested in African American music typically talk about jazz, blues, hip-hop. For a black composer to write a symphony in the 1920s and have it performed in 1934—what he went through, to make that happen. Talk about knocking your head against a wall! So it’s just enraging that someone should go through all that and create work that is so masterful and exciting and brilliant, and then it falls into neglect. It’s just not right.

Q: Today we hear concerns about “cultural appropriation.” Do you ever feel that you’re treading in territory that, perhaps, isn’t yours?
A: That’s a very fair question. I have felt nothing but welcomed and encouraged and supported by African American musicians and scholars in this field. I do feel anxiety. I work really hard to stay aware that I am writing about people whose experience I can’t know on a really deep level, because it’s so different from my own. I have some African American colleagues who have been extraordinarily generous with me and who have allowed me to ask questions and to run my writing and my ideas by them, so I count a lot on them to help me see if I’m on the right track.

Q: You play an instrument of Zimbabwe’s Shona people, the mbira (mm-BEE-rah). What is the attraction?
A: I learned about it when I first began teaching world music at Puget Sound in 2006. I fell in love with the mbira both because its sound is beautiful and because I found it kind of disorienting and perplexing. Mbiras are played mostly with your thumbs. So the music goes, dun-da, dun-da, dun-da, dun-da. So I’m listening to this recording, then the rattles come in, cha-cha-cha-cha-cha-cha. Every time, I would be like, what? That’s not where I thought the beat was! Because the rattles are dividing things into threes, instead of into twos and fours. Every time the rattles come in, it feels right as soon as they come in, but I can never anticipate why they would come in there.

Q: What are your aspirations, 10 years down the road?
A: Finish the Dawson book, work on his symphony. I foresee that I’m going to continue focusing on African Americans in music. I would like, through scholarship, to help get this music in the hands of conductors and performers, so that we can have more inclusion on concert programs.

Q: How would you do that?
A: For example, there’s lots of music that hasn’t been published. Or that was published but has fallen out of print. Also, just helping people to be aware of this wonderful music—that will broaden who gets represented in concert halls and in music programs and in the repertoire of students. I would also love to do more performing, as a pianist.

Q: We don’t often hear about social justice in the music world.
A: Yes, there are things I never thought about before I started studying African American music. I did an exercise, with a class on African Americans in classical music, where I said, “Go to the library and pick up a book that claims to be a broad survey of classical music, something with a sweeping title like Music in the 20th Century or A History of Western Music. Bring the book to class and report on how many African Americans are in there.” Once you start looking, it’s obvious that they’re not being included. My students all got furious, and they should be. As wonderful as my education at UPS was, I never performed a single piece by a female composer. I never performed a single piece by a composer of color. It’s hard for me to believe it now, but it never occurred to me that I was missing anything.

Q: So there is some serious work to do. What do you do for fun?
A: I have a 9-year-old daughter. That’s all the fun I need. 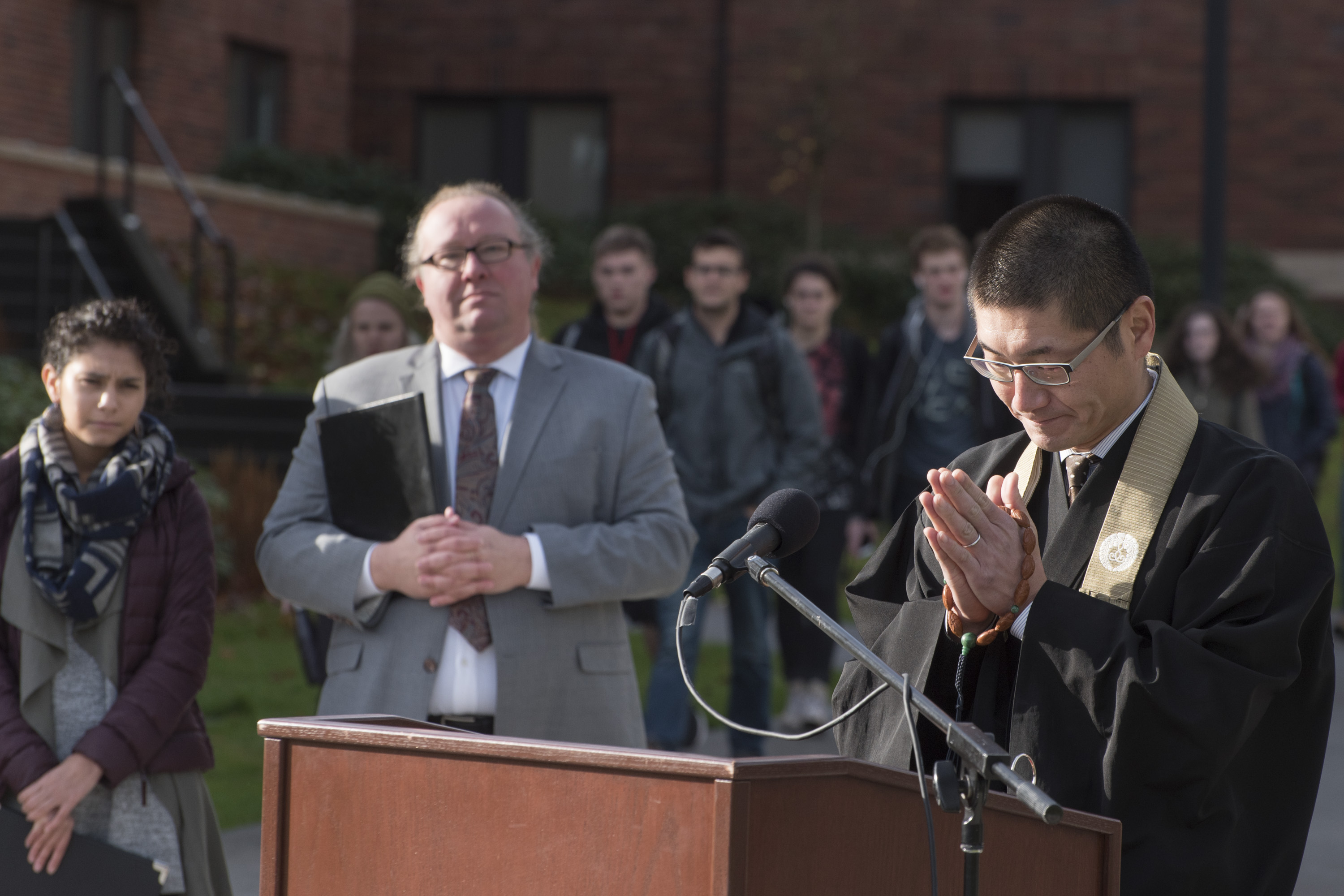