The gentle waves of the Puget Sound, tamed further by the embrace of Tacoma’s Commencement Bay, are barely audible. The hum of cars on nearby WA-509 fades as you walk down from the parking lot to the shore. Even the seabirds, hanging low and lazy in the sky, don’t break the peace. Everything at Browns Point is serene, right down to the quaint little art deco lighthouse.

The quiet makes the sudden excited energy from two barefoot college students seem all the more out of place.

One points a finger above the water line, and both stare into the air. The young man reaches for binoculars. He sighs, then passes them over to his partner, telling her, “PIGU.” 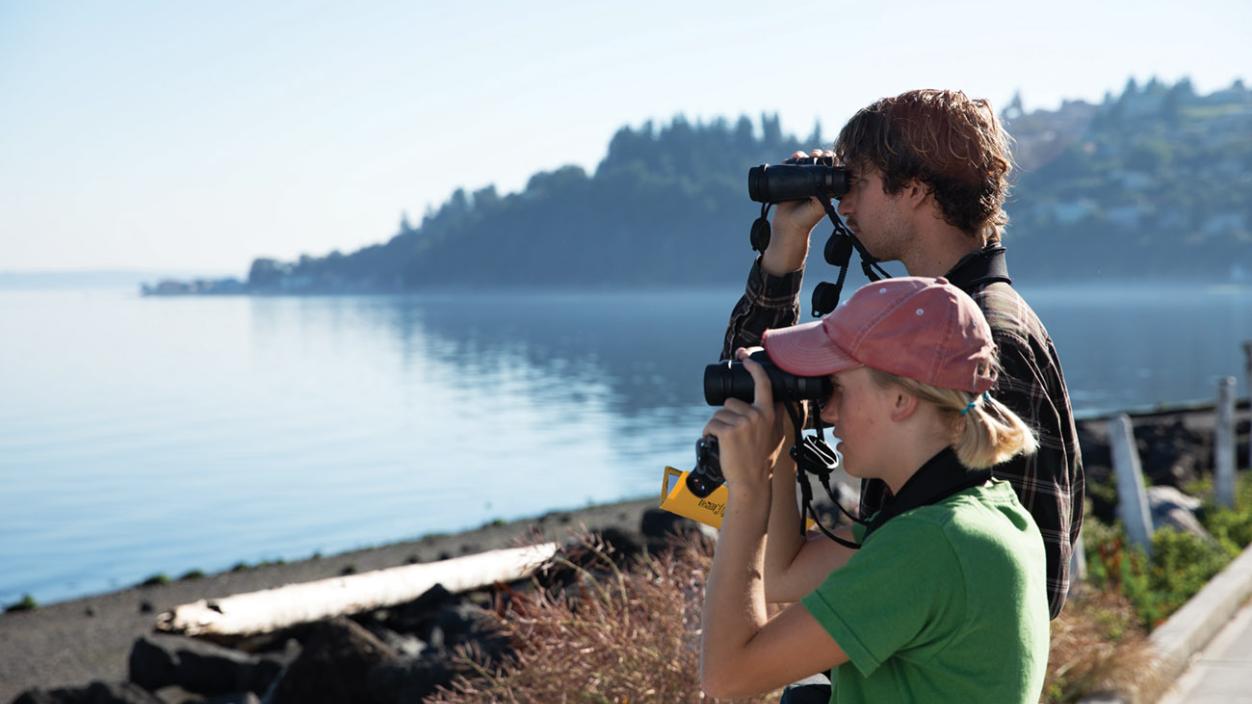 Max Merrill ’23 and Sam Gerrish ’25 spent time this summer observing the marbled murrelet, a tiny bird that spends most of its life at sea but comes inland to nest.

The pigeon guillemot, known by its banding code “PIGU,” is not the bird that Max Merrill ’23 and Sam Gerrish ’25 hoped to see. The subject of their research, led by biology professor Peter Hodum, is a small brown seabird called the MAMU: the marbled murrelet. Of special interest are the foraging patterns of this endangered species—and the questions that those behaviors raise about how best to protect them in the South Sound.

“They’re these funny little birds,” says Gerrish, “and then you think, Wow, you fly 40 or 50 miles to and from your nest—every dawn and every dusk?”

The marbled murrelet, like its relative the puffin, spends its life at sea, coming to shore only to nest. But the MAMU is unique in how far inland it comes: Other seabirds prefer to nest on coastal rocks, while MAMUs will fly dozens of miles inland to build nests high up in the canopy of old-growth coniferous forests. That’s why they’re in trouble. Deforestation in their old-growth habitats has posed a threat for decades—and, because their nests are so difficult to find, conservationists have faced a challenge in gathering enough data to help them.

Hodum’s research on the marbled murrelet began when he noticed small communities of the birds on his recreational kayaking trips. He saw them popping up frequently, almost always in the same locations. Hodum asked a colleague at the Washington Department of Fish and Wildlife about that pattern.

“He was really interested in seeing if there were consistent hotspots,” Hodum says. “That led me to suggest to one of my students, Bryce Poplawsky, that if he was interested, this might make a really nice senior thesis.”

Poplawsky ’22 did his thesis research on the subject, finding that Browns Point is a “seasonally consistent foraging hotspot” for the MAMUs and suggesting that future research fine-tune his preliminary observations of the birds’ habits. Merrill and Gerrish picked up that yoke this summer.

“It’s a really nice example of how students can help shape and drive research programs in our labs, on campus, and how that work builds on itself,” Hodum observes.

Merrill, who grew up in Portland, Ore., had an interest in birds and wildlife, in particular, from a young age. His mother took him to local wildlife refuges to bird-watch, and his father kept track of animals they saw when they went on trips together. When the time came to choose a college, his interests enticed him to Puget Sound. “I had heard about [Hodum and colleague Peter Wimberger] before coming here. It was part of why I came here,” Merrill says.

Gerrish, meanwhile, is the first birder from her Rhode Island family; a high school teacher with a love for ornithology got her interested. Now, she says, family nature walks include endless questions about birds they might see.

The two students made their observations from 8 a.m. to noon about four times a week over the summer. Every half hour, they counted the number of MAMUs they were seeing. They also tracked other variables of potential importance, including the number of boats and harbor porpoises nearby. When the birds dived, Merrill and Gerrish recorded the number and duration of their dives. 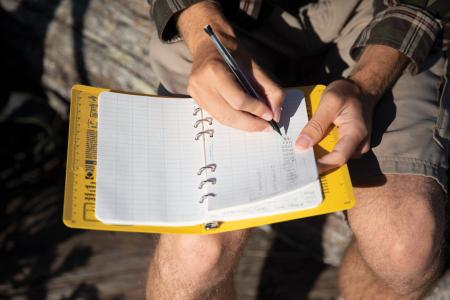 It was slow work at times: Earlier in the summer, Merrill would often see six murrelets at a time, but during the hot spell, the average was just one or two birds each day. Still, the students persisted, since their long-term hope of further protection for MAMUs relies on consistent data across many seasons.

“It’s really important to get annual data to back up and solidify that this is, in fact, an important foraging spot for them,” Merrill says. Gerrish agrees: “One year’s worth of data is small potatoes in the world of trying to get protections in place.”

Merrill, now a senior, and Gerrish, a sophomore, are unlikely to see any fruits of their labor while still at school. But that fact bothers neither of them. Each agreed that their favorite part of the research is engagement with the community around Browns Point. Merrill considers conservation on a micro level just as important as government action.

“Having a couple more people know what this bird is, and know that it’s here, makes me feel good,” adds Gerrish.

“And it cracks me up when everyone asks me if I’m looking for whales.”