Inviting the crowd to echo each syllable back to her, Skye taught audience members the enthusiastic Hawaiian cheer of approval so they could show their support to the evening’s dancers in the same way locals would on the islands. But really, she was giving them a lesson in the aloha spirit.

Presented by Puget Sound’s Hawai`i student club, Ka `Ohana me ke Aloha, the lu`au is one of the largest celebrations of Polynesian culture in Washington state and features a Hawaiian dinner and a stage show with traditional dances from Pacific Ocean peoples. Not only a delicious buffet and entertaining evening, the event is an opportunity for Hawaiian students to share their cultural history with friends, professors, and the community. 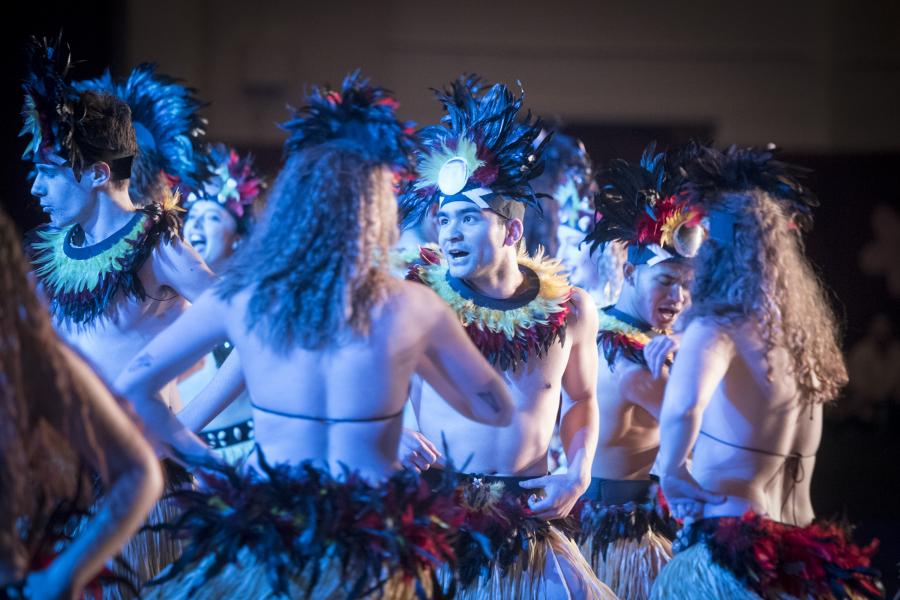 “My goal was to tell the story of Hawai`i and of Hawai`i’s leaders,” says Amber Odo ’19, who serves as president of Ka `Ohana me ke Aloha and helped organize the lu`au. She and her team selected the event’s theme, “Ho`ohanohano I Na Mo`olelo I Na Ali`i,” nearly a year ago, shortly after the 2017 lu`au. Meaning “To Honor the Stories of the Ali`i,” the theme reflects the importance of sharing not only the beauty of Hawaiian song and dance, but its significance.

Amber grew up on Oahu, where she began dancing hula at the age of 4. She wanted those participating in the event, especially the dancers, to understand the meaning and context of what they were doing. “We encouraged our dance teachers to talk about each song with their dancers, explain what it’s about, who it’s for, why it was written.”

Ancient Hawaiians, relying on songs, or mele, to pass their stories from generation to generation, used lyric and movement to tell of Hawai`i’s gods and heroes, traditions, and customs. With the arrival of American missionaries and others of European descent, hula was banned and the performance of these songs and dances was relegated to secrecy or abandoned altogether. It was members of the ali`i, Hawai`i’s ruling class, thought to be descended from the gods, who restored the regular practice of Hawaiian culture and reintroduced hula to the Hawaiian people.

Throughout the evening, Skye and alumnus Kawehi Marshall ’83 introduced each dance with details of its origin and meaning. “With lu`au, people start to get a better idea of the place that we come from,” Amber says. “Back at home, it’s all about the aloha spirit, being very friendly and welcoming. We want to spread that up here, too.”

The evening begins with a hula kahiko, a traditional and ancient style of hula accompanied by a pahu drum or ipu heke (a hollow gourd) and an oli, or chant.

Both men and women perform the hula auana, which features the ukulele and other instruments instead of the pahu drums and chanting of the hula kahiko.

Lu`au performers celebrate King David Kalakaua, known as the Merrie Monarch, who encouraged the regular practice of Hawaiian culture and reintroduced hula to the Hawaiian people.

Similar to the era when the Hawaiian people were banned from performing hula, there was a time when Tahitian dance was outlawed.

The performance of Ori Tahiti by the French Polynesian people was limited to special occasions, such as Bastille Day, a day celebrating French nationalism.

In the late 1950s, the dance group Heiva developed a more refined style of Ori Tahiti, leading to a renaissance of the dance.

President Isiaah Crawford joins in during the Ori Tahiti.

The song "Ku`u Ipo I Ka He`e Pu`e One," written by Princess Miriam Likelike, tells the story of a young woman, heartbroken because she cannot marry her true love.

The lu`au's dance teachers—all students—perform one of the last dances of the evening.

The final dance of the lu`au features members of the Class of 2018.