Research in our lab focuses on evolutionary and developmental questions of plant biology. Currently our primary focus is on functional genomics of phytochrome signaling. Other long-term interests in the lab are the evolutionary biology and physiology of plant polyploids.

Throughout development, signal transduction plays an important role in determining cell fate and establishing a developmental program so that a single cell can develop into a multicellular organism. Signal transduction uses signaling pathways, which are circuits that convey messages between cells and their environment. The response to external signals is context dependent, meaning the output depends not only upon the cell type in which signals are transduced, but also upon the stage of development of the organism, other interacting signaling molecules, and outside environmental signals.

We focus our studies on the interaction between light perception and growth hormones, which implement the perceived signals and translate them into appropriate gene responses. Specifically, we study the function of several lesser-known genes in the phytochrome family of red-light photoreceptors in tomato and their interaction with downstream signal transduction molecules. We use integrative approaches, combining the power of whole genome analysis, such as RNA-seq and proteomics, with classical physiological approaches to understand which genes are involved in specific signaling responses. We are also interested in better understanding how light receptor genes interact with the entire genome using bioinformatic gene network analysis.

We have recently published two papers in this field. The first analyzed differential gene networks in wild type versus plants missing the light receptor phytochromeA in tomato (Carlson et al. 2019). The second describes what happens when a gene duplicates and each copy assumes new roles over evolutionary time. Specifically, we analyzed transcriptional changes in plants missing either phytochrome B1 or phytochrome B2. We find that each of these duplicated genes has assumed new functions in the regulation of the light responses in tomato (Carlson et al., 2020).

Our lab has a long-standing interest in genome structure and its role in plant evolution. Plant genomes are remarkably dynamic and structural change is tolerated in plants much more readily than in animals. One of the most frequent structural changes in plant genomes involves the duplication of the entire chromosome complement leading to a state known as polyploidy. Two types of polyploids are distinguished: allopolyploids (hybrids with duplicated genomes of two different species) and autopolyploids (duplicated genomes of one species).

Because polyploid genomes carry more loci of every gene than diploids do, it has been suggested that they are more adaptive to their environment and are superior to diploids in their ability to evolve. Despite much recent work by many research groups on the genomic responses to polyploidy, there is still surprisingly little known about direct connections between polyploidy, polyploidy-induced genetic changes, and corresponding physiological responses that directly affect the polyploid’s phenotype (discussed in more detail at Madlung 2013).

Using the model genus Arabidopsis we study physiological changes and their underlying molecular mechanisms in polyploids that could lead to speciation, adaptation, and genome evolution. For example, we reported on the finding that allopolyploids in Arabidopsis have higher photosynthetic rates than their parent species resulting in more starch accumulation, however, only in bright daylight. This finding suggests that environmental conditions might dictate to what degree allopolyploidization allows the new hybrid species to be more vigorous than its parents and potentially outcompete them in specific ecological niches (Solhaug et al. 2016). A study comparing two different geographic populations of the polyploid A. suecica showed that here, too, genomic differences that arose from or during genome duplication play a role in environmental adaptation (Carlson et al., 2017).

We have also studied the role of epigenetics in transcriptional change (Madlung et al. 2002), and particularly with respect to conditionally mobile sequences in the genome called transposons (Madlung et al. 2005). We have used cytogenetics to address the question of genome stability in recent as compared to established polyploids. We find that somatic cells in Arabidopsis allopolyploids are mosaic for varying degrees of aneuploidy (loss or gain of individual chromosomes, not entire sets) (Wright et al. 2009) and that higher levels of polyploidy lead to increased levels of aneuploidy. In an experimental population of Arabidopsis allohexaploids that we produced by cross-pollination of the parents and subsequent inbreeding for seven generations we were able to show a correlation between increasing phenotypic diversity and cytogenetic variation. This study was featured as the cover story in the June 2012 issue of Genetics (Matsushita et al. 2012). We continue to study the question to what degree allopolyploidy functions as a mechanism for rapid diversification and speciation using next generation sequencing and cytogenetic approaches. 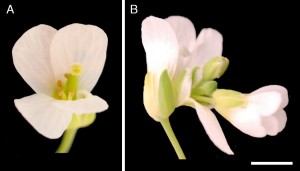 A related project, currently on the back-burner, is aimed at understanding a peculiar process called floral reversion. Plants that undergo floral reversion abort the normally terminal developmental process of flowering. Instead of producing flowers and setting seed, reverting branches produce new inflorescences, and in some species new leaves, out of fully developed flowers. We have begun to analyze the molecular mechanisms for this phenomenon in polyploids of Arabidopsis suecica (McCullough et al. 2010, Asbe et al. 2015) and are interested in finding out if genome duplication plays a role in this novel phenotype.

I am interested in the question of how best to introduce undergraduate students to genome-scale data analysis. To this end I have developed various lab modules that I have tested over the years. The results of two such studies were reported in CBE Life Science Education (2011), and PLoS Computational Biology (2018).

All projects in the lab lend themselves well to independent research in genetics or molecular biology. If you are interested in joining the lab contact me and I can suggest a number of specific projects to you. Links to our published work are on our publications page. 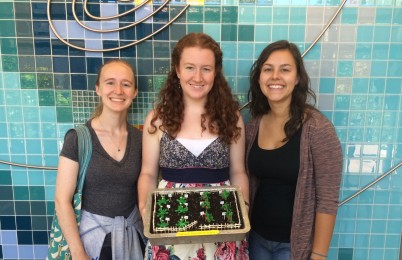 Each year the science summer researchers hold a research-inspired dessert contest. Check out some of the Madlung Lab's entries through the years!