Other photos by Ross Mulhausen

Professor Andrew Gomez was awarded a Whiting Fellowship to collect and preserve oral histories about race in Tacoma. 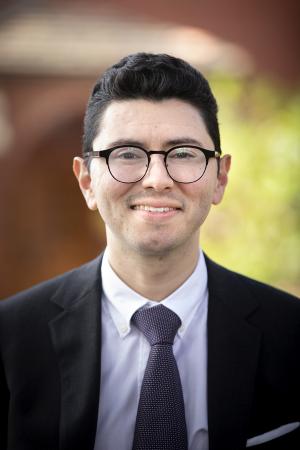 As the son of Cuban and Honduran immigrants living in the culturally diverse world of Miami, Andrew Gomez became interested in history at a young age. Specifically, he wanted to know how Cuba’s history led to the proliferation of Cuban culture in the city.

“I had a real interest in South Florida as a place, particularly because the more I went to other parts of the United States, the more I realized that Miami was the exception and not the rule when it comes to immigration and immigrant history,” he says.

Andrew is a history professor at Puget Sound and far from his Florida roots, but he has found a new passion exploring the history of migration here in Tacoma. He was recently one of seven American educators awarded a $50,000 Public Engagement Fellowship from the Whiting Foundation. Awarded to humanities faculty who embrace public engagement, the fellowships fund ambitious, often collaborative projects with the goal of creating educational resources for public use.

For his project, Andrew will create a website to preserve and share the oral histories of three facets of Tacoma history: the expulsion of Tacoma’s Chinese population in 1885 and the city’s attempts to reconcile the event 100 years later; the history of the Hilltop neighborhood, including redlining and gentrification; and current resistance to the Northwest Detention Center. He will collaborate with campus and community members including Lo Sun “Lotus” Perry, a professor in Puget Sound’s Asian studies department and a member of the Chinese Reconciliation Project Foundation’s board; members of Tacoma’s Hilltop Action Coalition; and Puget Sound’s Advocates for Detained Voices club, which works with local advocacy groups to offer basic legal and counseling services for families of detained individuals.

“It’s about trying to create community history,” Andrew says. “The workplace of the historian is the archive, and the archive has always been a privileged institution because it’s primarily about the histories of people that we deem worthy of preserving. Oral history has always served as something that counteracts that.”

The project has been percolating in Andrew’s mind for four years. When he interviewed for a postdoctoral position at Puget Sound in 2015, he stayed at a hotel on the Tacoma waterfront, less than half a mile from the Tacoma Chinese Reconciliation Park. “I just remember walking through the park and reading the plaques and everything, and it was fascinating,” he recalls. “I’m interested in immigrant history, but typically immigrants from Latin America. I thought, ‘Well, if I end up here, I’d like to know more about this.’ It’s kind of amazing how little historical scholarship there is on the event.”

Subsequently, Andrew spent hours in Tacoma Public Library’s Northwest Room, digging up any and all information on the Chinese expulsion. Those materials became the basis of a digital history class he taught early on in his professorship and a website dedicated to the event.

Now, with the funding from the Whiting Fellowship, he will spend the coming academic year delving in to the other historical aspects of race in Tacoma. This summer, he will hire one of his students to help him collect oral histories about community in the Hilltop neighborhood. In the fall, he will teach a new course about oral history methodology in which his students will gather histories related to the creation of Chinese Reconciliation Park. His website is set to be public in spring 2020. But Andrew notes that his work won’t end then.

“It’s a big project,” he says. “It’s about getting [the website] substantively going and then continuing forever. This is by no means an endpoint. It’s about communities coming together to try and preserve these stories.”

In 2020, as it does every 10 years, the U.S. Census Bureau will attempt to make an official, complete count of the population. Andrew Gomez, assistant professor of history, u...