In 1938, Mary Louise Curran ’36 entered an essay contest that would change her life and her community forever. The topic was “Why I want to live in University Place,” and the goal was to advertise a newly developed subdivision close to the Puget Sound campus. She wrote:

At Soundview you may select a lot with unequaled view of nature’s splendors, one ever-changing. In the foreground are the sparkling waters of Puget Sound, in the distance wooded islands and beyond the Olympic mountains! Here, in surroundings free from the soot and smoke of the city, one may breathe refreshing sea air and enjoy the sunshine of the day, not to mention sunsets that leave you breathless. Where could one find a healthier spot to live and bring up children?

Mary won the contest, and the most enviable prize: a half-acre lot in University Place then valued at $400. She and her husband, Charles Curran ’35, built a home there and began raising a family. In 1951, a seven-acre wooded property two blocks south became available, and the couple saw an opportunity to create something special. They bought the land for $215 per acre and set to work clearing it for an apple orchard. They brought horses over to graze among the trees, a pretty sight that reminded Charles of his childhood in Kansas, and in 1955, had a two-story midcentury-modern house built on the property.

Today the Curran House is listed on the National Register of Historic Places, and the orchard remains, drawing visitors for spring blossoms, summer concerts, and the fall cider squeeze.

“The orchard has continued to be a gathering place,” says Debbie Klosowski, who worked with the Curran family to preserve the land as a community park in 1993. “It’s a really special place where you can go to escape the hustle and bustle and the stress of everyday life. It’s also a wonderful living example of our community’s past.”

In her role as vice chair at the nonprofit organization UP for Arts, Debbie is involved in a campaign to fund a life-size bronze sculpture of a girl feeding an apple to a horse by local artist John Jewell ’66, M.Ed.’69. The “Forever Friends” sculpture will be located on the orchard to commemorate the land’s 25th anniversary as a park and pay tribute to the Currans, who made an indelible mark on the community of University Place, as well as the University of Puget Sound. 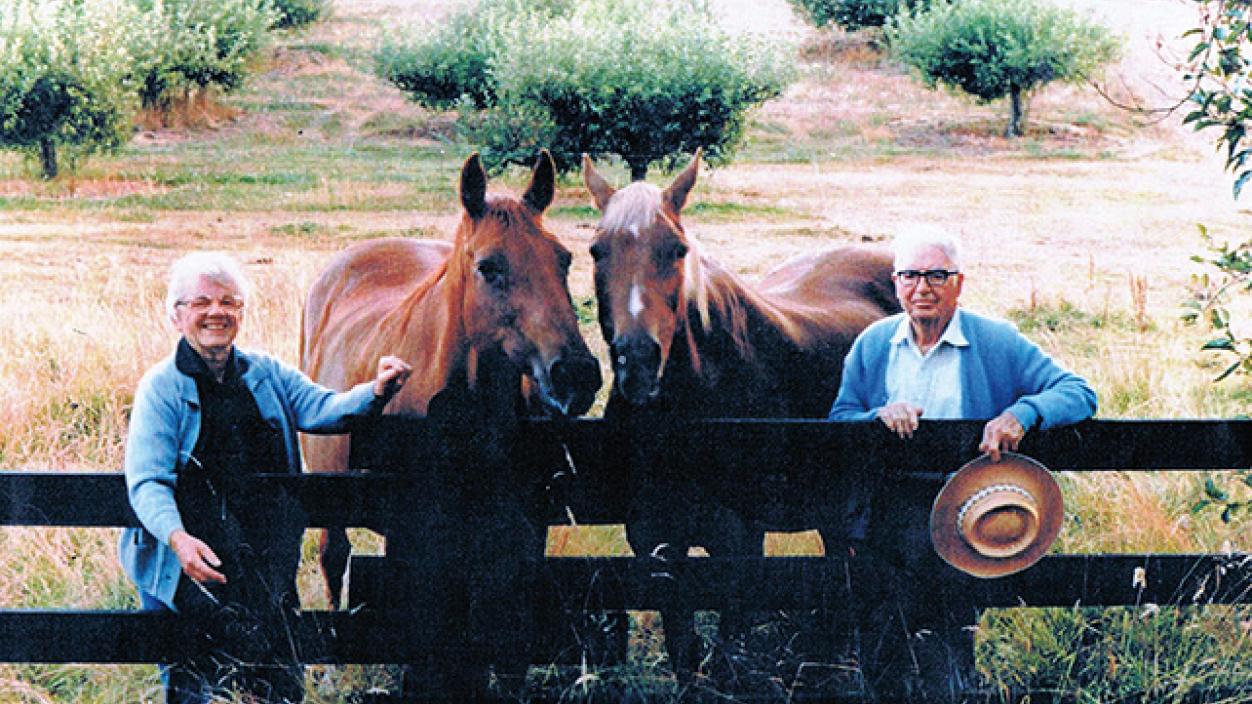 The Currans met on campus in 1932. Mary came from Olympia, Wash., and Charles from Pratt, Kan., coming West “on the rails in the Depression,” according to his son, Charles “Chuck” Curran ’67. Mary’s parents hadn’t gone to college, but she was academically inclined, driven to get an education and inspired by an aunt who taught Latin.

Both Currans earned degrees in business administration. Charles worked as a driver for Wonder Bread/Hostess, then as secretary-treasurer of Teamsters Local 567, the union representing local bakery drivers and salesmen. In both roles, he had to make tough decisions that balanced competing interests.

Mary stayed at home to raise their three children—Chuck, Susan Eichner ’61, and Catherine Hagen—until the youngest was in grade school. Then she returned to Puget Sound, taking various high-level administrative roles in an era when few women held positions of power. Her titles included assistant dean of students and dean of women
students.

“She wanted to work. She felt good about it,” says Chuck.

When the college established its first personnel department after the federal Equal Employment Opportunity Act of 1972, then-President R. Franklin Thompson asked Mary to head it. Despite the progress in equal employment in the ’70s, equal pay remained an issue. “There was a major gap, and she was a champion of having women catch up,” says Chuck.

Colleagues and friends agree that Mary was ahead of her time. She navigated major social issues and kept pace with changing norms. Part of her job was serving as “affirmative action officer,” and she worked to achieve equality for students, faculty, and staff, as well as more diverse representation.

George Mills ’68, M.S.’72, associate vice president for university relations and long-serving vice president for admissions at Puget Sound, remembers Mary as “wise and unflappable.” While gender issues were only beginning to enter mainstream conversation, “the smoke was certainly coming under the door,” George says. Mary recognized how the world was changing, and she helped create policies to bring the college into the modern age.

She was “a kingpin for student services,” says Mary Longland, who worked for Mary Curran at Puget Sound and kept up a long friendship afterward.

The personnel department itself “was a huge transition,” Mary Longland says, especially for departments that used to have full autonomy over employees. But she notes that Mary Curran sailed through it without much conflict “simply because people knew at the onset that she had the other person’s best interests at heart.”

“And the university’s best interests at heart,” adds Rosa Beth.

“That’s right,” Mary Longland says. “But she wasn’t any pushover.” 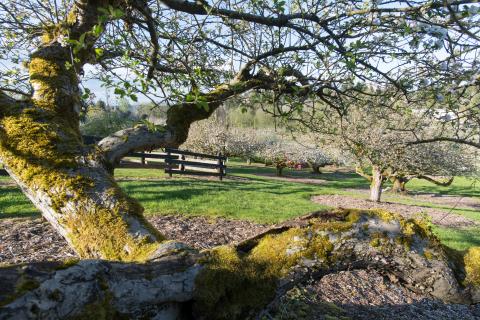 Mary Curran went out of her way to know individuals and respect their lives and contributions to the university, and included them in her efforts to make a better world.

Another initiative of Mary Curran’s was finding creative ways to house local low-income students (then called “townies”) who couldn’t afford to live on campus. She didn’t want them to miss out on student life.

“Anybody who had an issue would feel comfortable going to Mary Curran for help,” says Mary Longland.

While Mary was progressive and outgoing, Charles was more reserved and conservative. Still, they harmonized well. “They were very much social people, interested in the community,” says George Mills.

The Currans regularly welcomed students for dinner at their home, and colleagues came for gatherings such as the annual holiday party, where the Currans served freshly pressed cider. Ultimately, Mary’s retirement party was held there.

“I think any housekeeper who had ever been on the staff of UPS attended,” Mary Longland says. “Mary went out of her way to know individuals and respect their lives and contributions to the university, and included them in her efforts to make a better world.”

To build their striking home in 1955, the Currans had hired noted Tacoma architect Robert Price. “My parents were not flashy,” Chuck Curran says. “But Dad thought Robert Price was a superstar.”

With yellow and black siding, orange doors, and stained glass at the main entry, the house was “very modern, and didn’t seem to fit Mom and Dad’s history,” Chuck says. “But they liked that home.”

Mary tended the vegetable garden while Charles worked to clear the wooded acreage, wrestling tree stumps and hauling out blackberry brambles. “It was a lot of work,” Chuck says. “Some of it was done by bulldozing, but a lot by dynamiting and Dad’s own clearing. I was 7, and had a little hatchet.”

Once there was room to make their own mark, they planted more than 200 McIntosh, Gravenstein, and Golden Delicious trees, as well as cherry, peach, nut, plum, and apricot.

Charles approached the property as more than a hobbyist. The family raised cattle at times and chickens one year, and Charles kept studying agriculture to see if he could come up with a better plan. Even on weekends, the family got up at 5 a.m. “Mother said, ‘I am not raising lazy children’ more than once,” Chuck says.

Using a tractor and trailer, Charles would harvest apples and bring them up to the house on top of the hill, where people would pull in periodically and buy a box or two. “It kept him in touch with people in the neighborhood,” Chuck says.

Even as the city grew and changed, the property remained a center point of the community. “I fell in love with the apple orchard,” says Debbie Klosowski, a former mayor of University Place. “I grew up in Wisconsin, and we used to go out in the country in the fall to get apples. I thought it was this wonderful place.”

Visitors often dropped by to visit the horses, too. “Mary would tell stories about the horses, that sometimes they could hear the music being played by the Curtis High School band, and they would start prancing around like they were in a parade,” Debbie says. “And when it was cider-making time, when the horses heard the cider presses going, they would race over for the mash.” 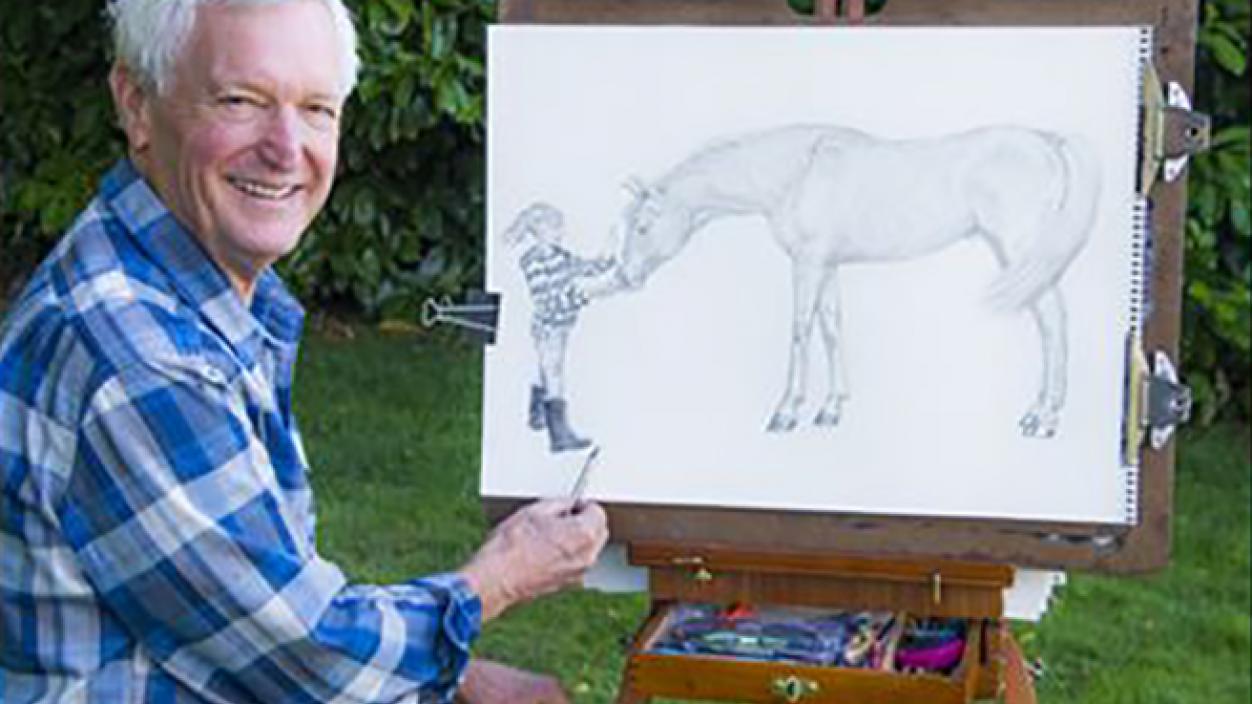 It’s no surprise then that a horse named Brewster would be the model for John Jewell’s bronze sculpture. As a student at Puget Sound, John had often visited the orchard for get-togethers with the Currans, and he and his wife, Andrea (Watt) Jewell ’66, often saw horses Brewster and Christopher grazing in the field.

As part of his artistic process, John has been studying horse anatomy, focusing on details such as the curious look they get when reaching out to investigate the gift of an apple. His own granddaughter is the model for the young girl.

After the Currans died—Charles in 1998, Mary in 2011—their children dedicated a memorial to the couple on the Puget Sound campus: the Charles Curran Sr. and Mary Louise Curran Seminar Room in Wyatt Hall. John’s sculpture will be another tribute and a gesture of gratitude from the community that still treasures the land that the Currans worked so hard to maintain.

Debbie Klosowski feels sure that the couple would be pleased to see the orchard today, 25 years after it was  transformed into a park. She remembers Mary saying how she loved looking out the window and seeing schoolchildren visiting the orchard and volunteers caring for the trees—and “knowing that this legacy would keep giving.” 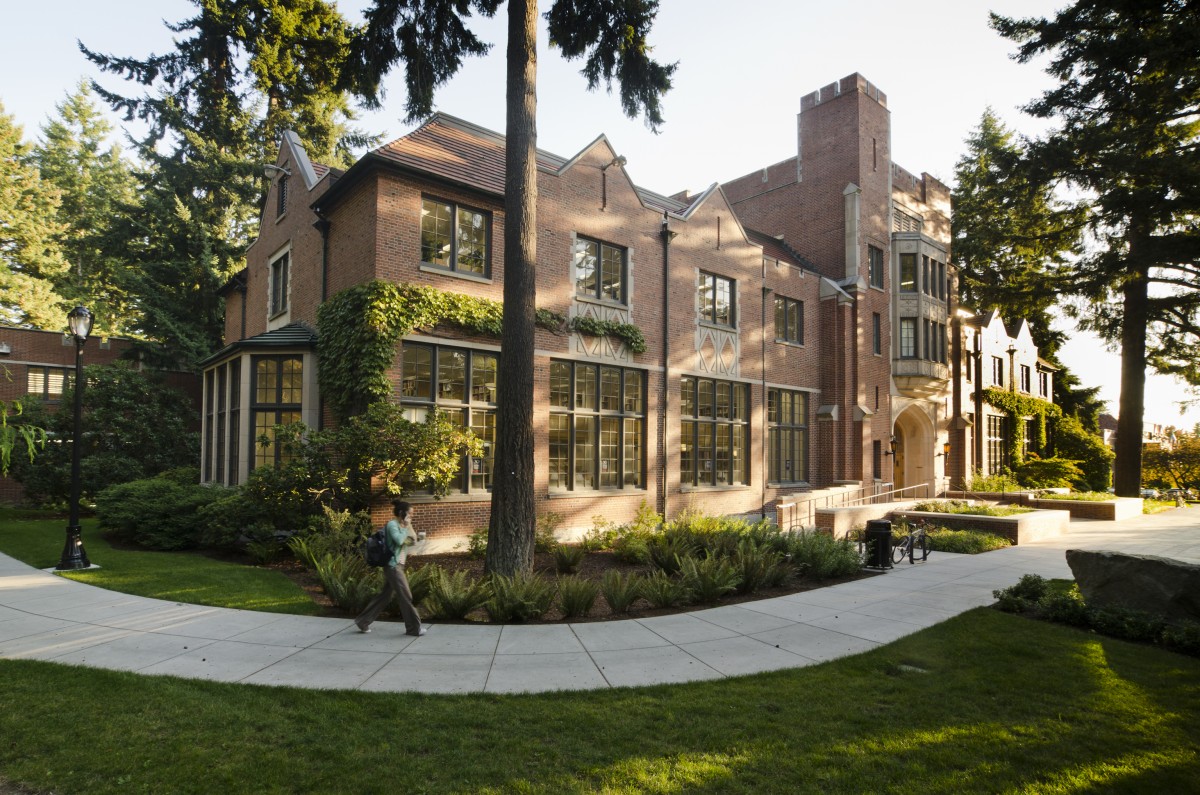 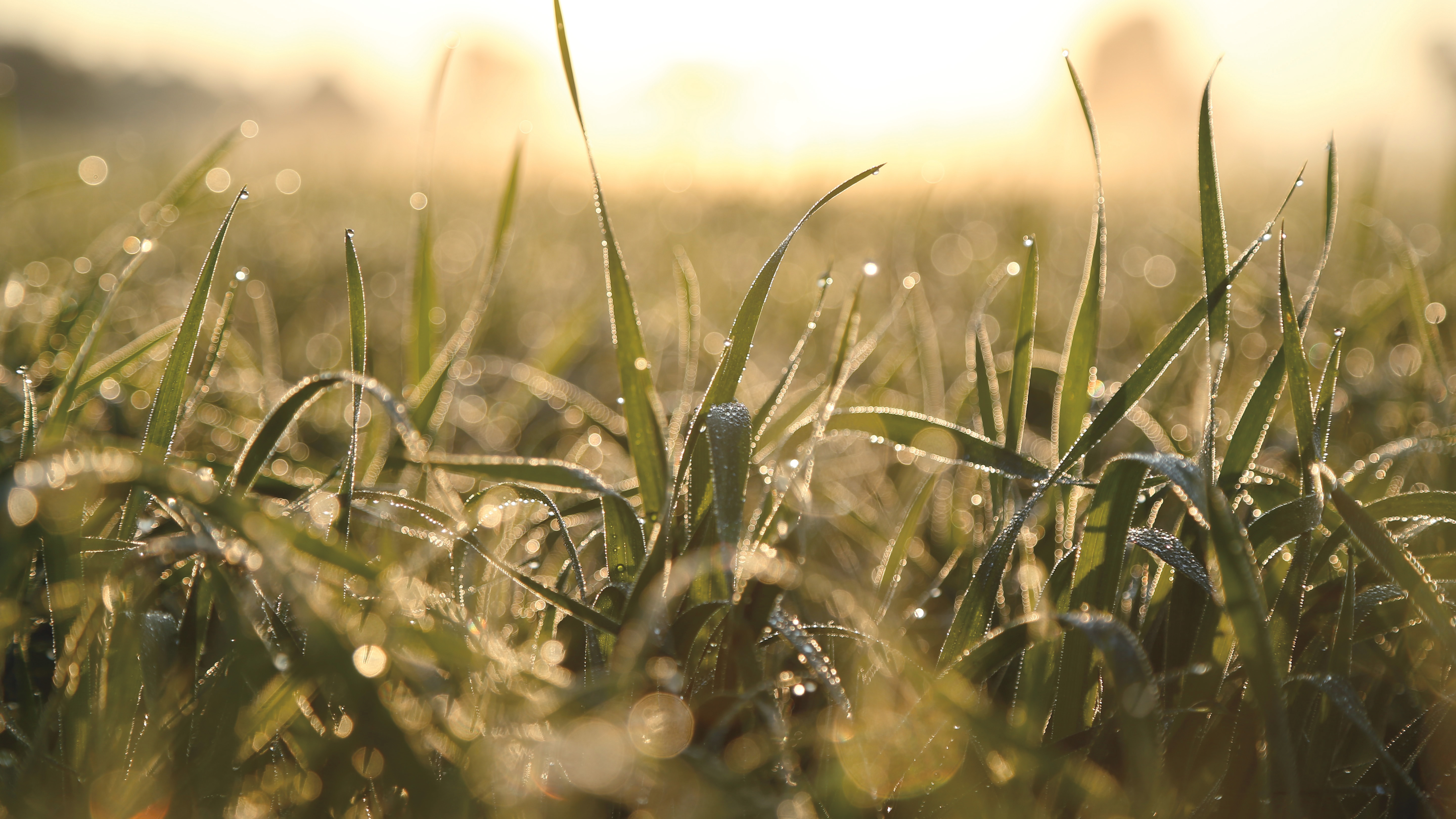 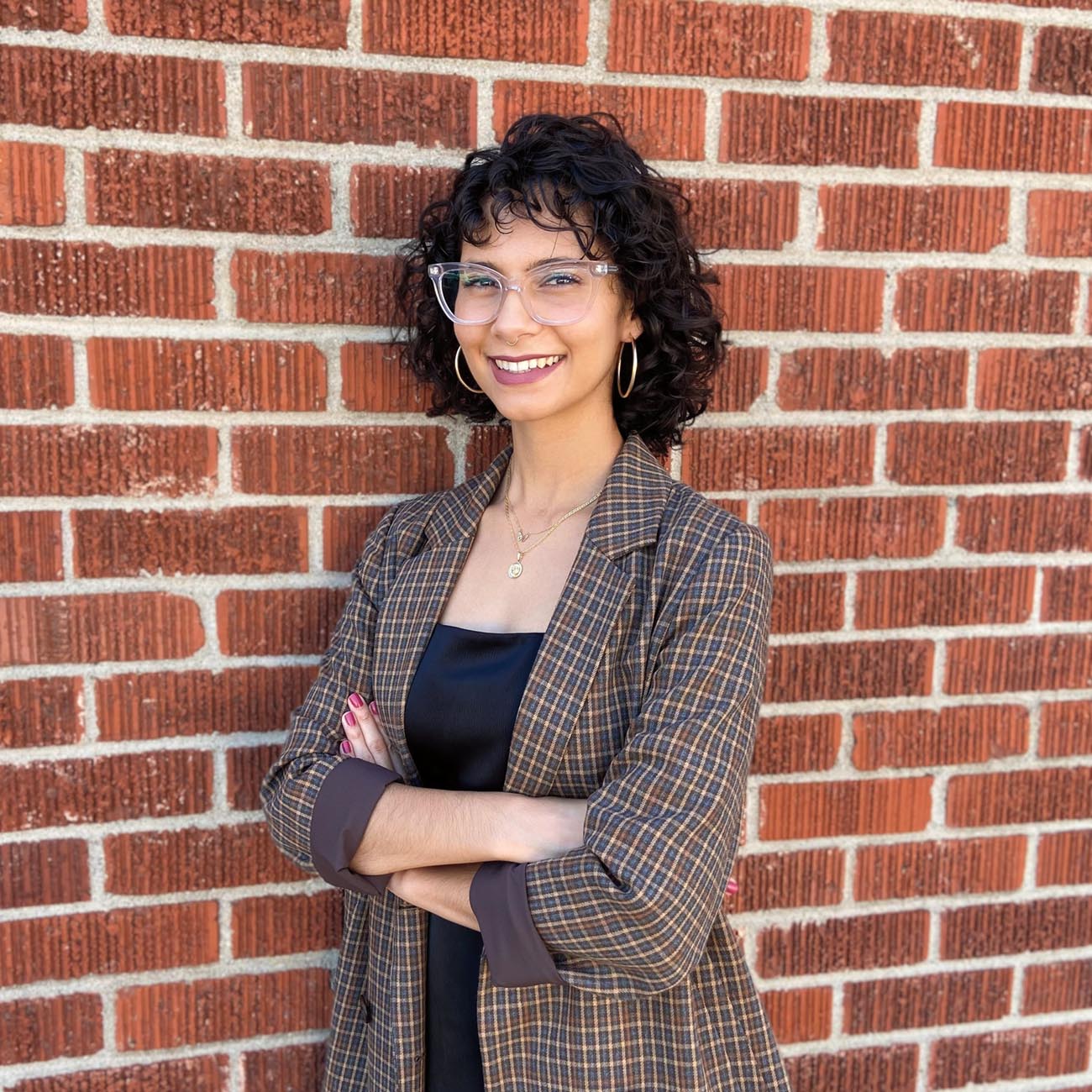 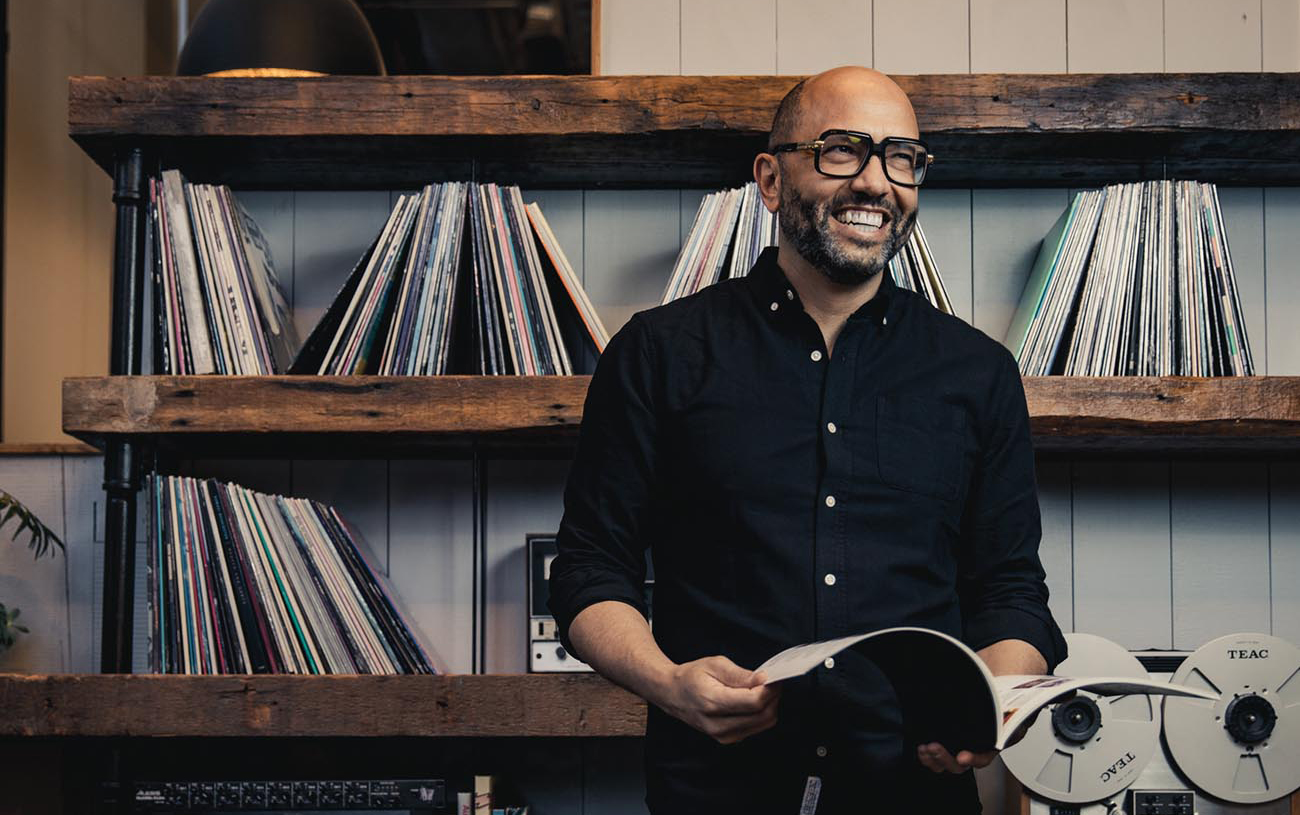 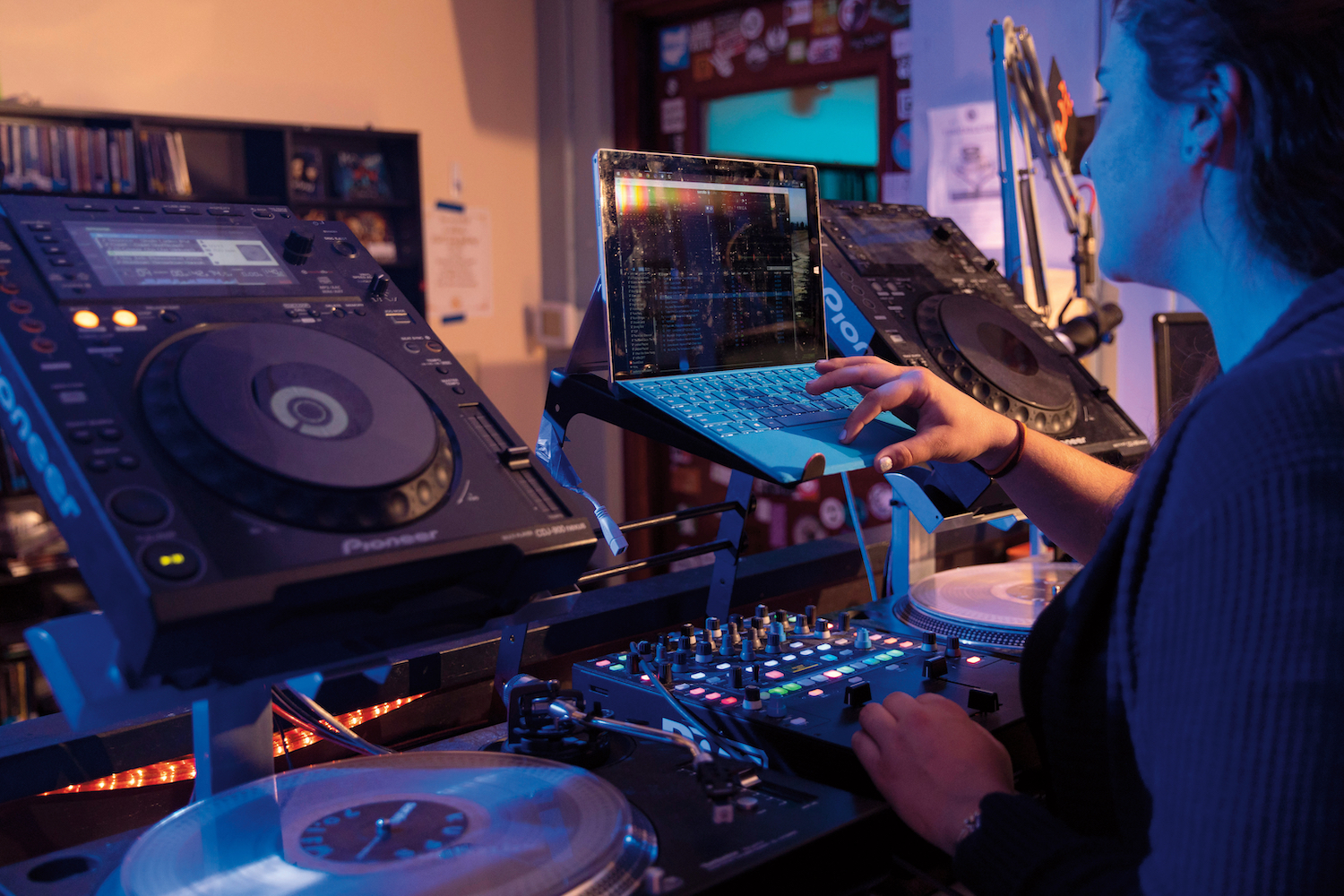 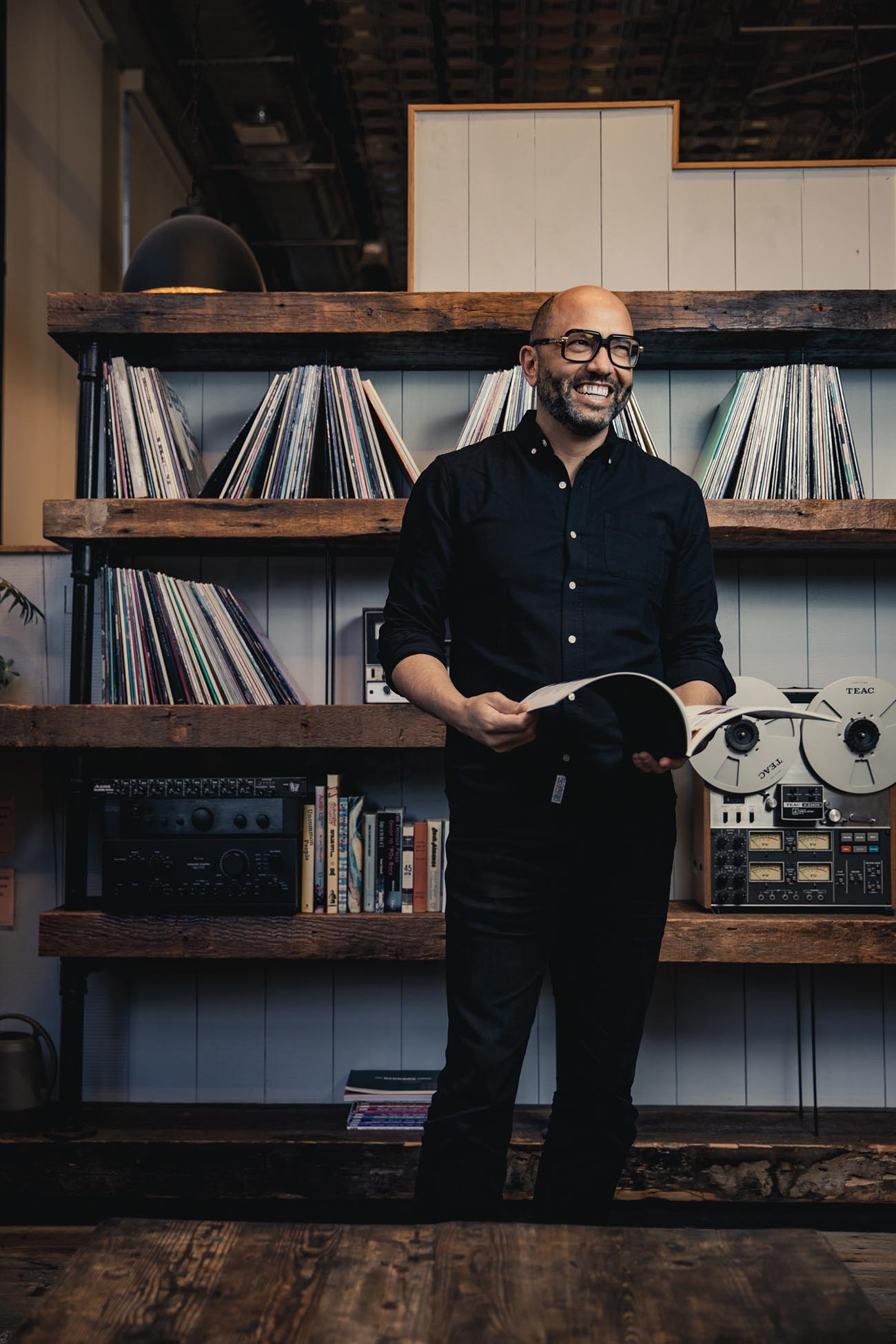 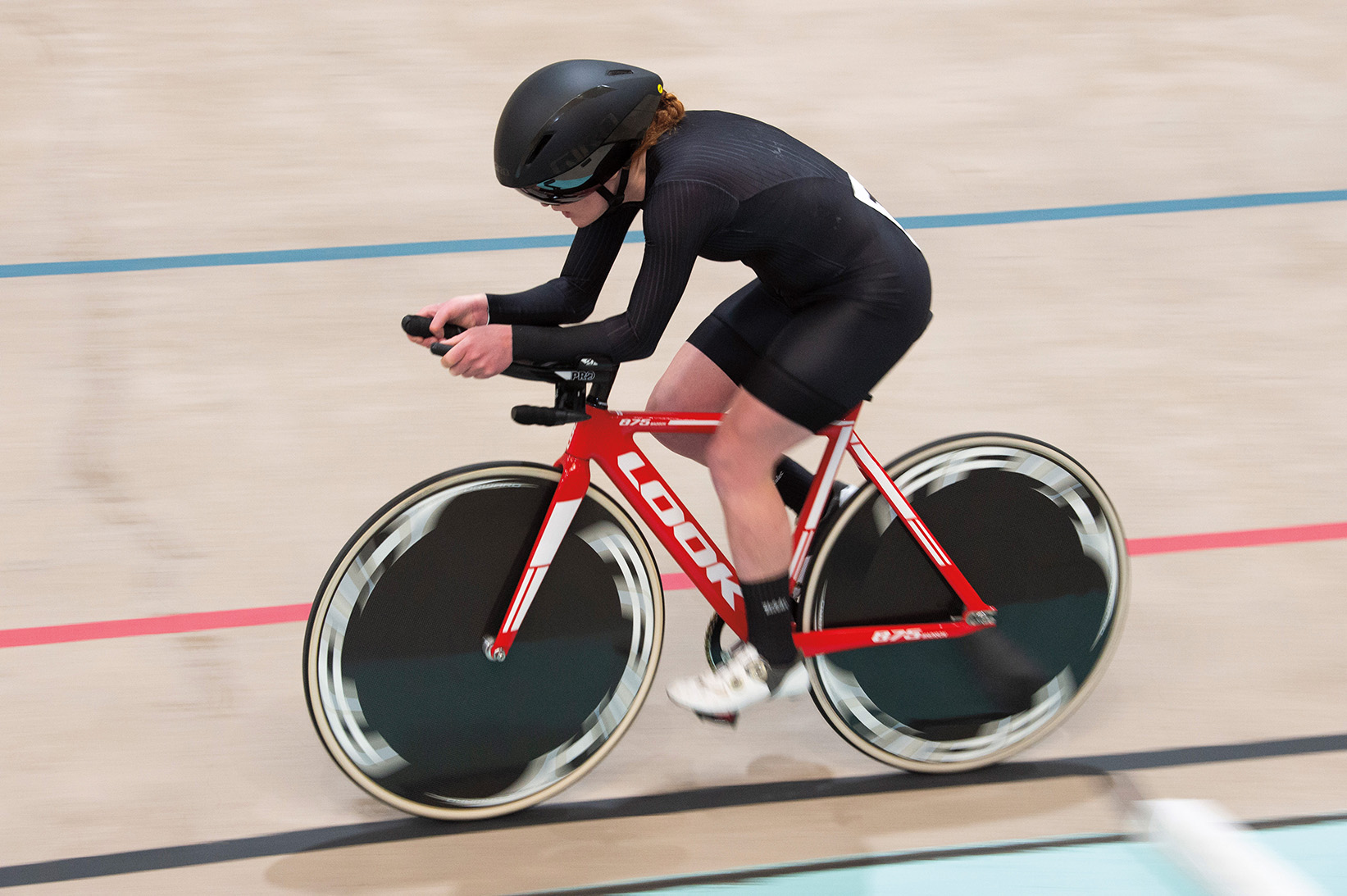 Clara Brown ’17 walked into the VELO Sports Center in Los Angeles, Calif., and immediately her palms started to sweat. It was the day before the 2019 U.S. Paralympics Track... 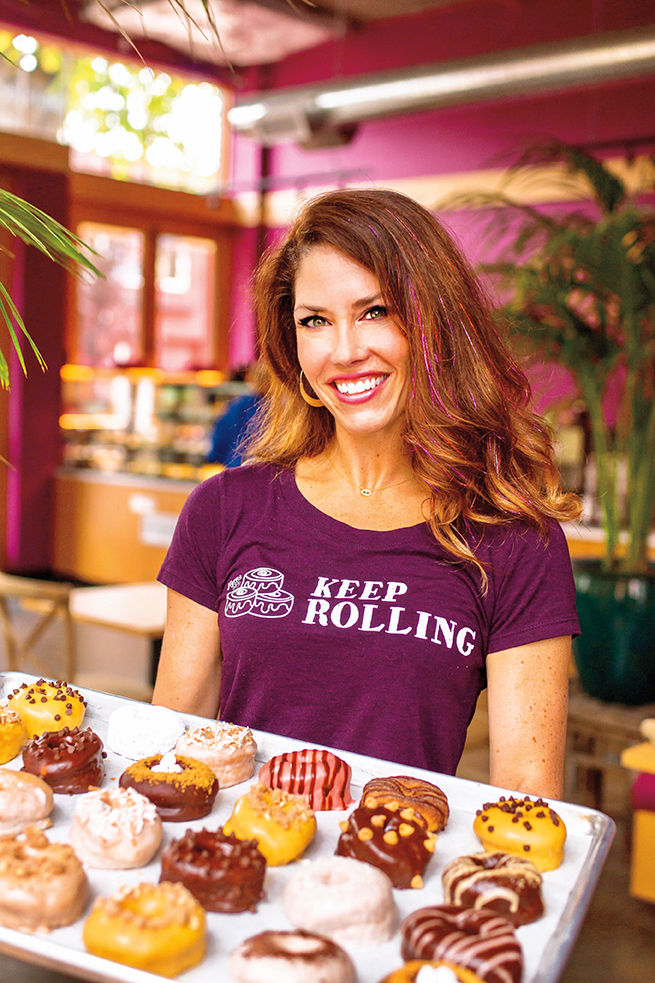 It turned out they were tears of happiness: The girl had been diagnosed with celiac disease, an immune disorder exacerbated by gluten. She’d become accustomed to eating only ...