TACOMA, Wash. – Ainsley Liberty Feeney of Memphis, Tenn., and Kaushal Raghu of Sunnyvale, Calif., are the University of Puget Sound’s two newest Matelich Scholars. The pair were awarded the prestigious scholarship in recognition of their outstanding potential to excel academically, succeed as inspirational leaders, and give back to their communities through sustained personal growth and a lifetime relationship with the university. The award covers tuition, fees, and room and board at the university for up to four years.

The scholarship is made possible by a generous gift from George E. Matelich ’78 and Susan E. Matelich. Ideal applicants are students who have the character and commitment to make a difference, and who demonstrate the motivation to positively impact their communities in college and beyond. Feeney and Raghu are members of Puget Sound’s Class of 2025, and are part of a cohort of 19 Matelich Scholars awarded since the program began in 2012. 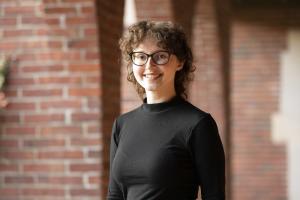 As the founder and president of Period @ 901 Memphis, Ainsley Feeney worked to help destigmatize the conversation about menstrual cycles. As part of this work, she testified in front of the Shelby County Board of Commissioners in support of bill TN HB-95, which would eliminate the luxury tax on period products in Tennessee.

Feeney plans to continue her work in community service and social justice while at college, which led her to the University of Puget Sound: “My ultimate goal as an activist is to build a platform for women in the future, and one way I'll be able to do that is through education. As I explored the school more, I was impressed with the law, politics, and society track of the politics and government program. By the titles alone, it seems the classes will give me a new perspective on justice in our world. It will also prepare me for a career as a human rights lawyer, where I can truly fight for marginalized communities.”

In high school, Ainsley served as publicity secretary for the speech and debate team, a leader of the Arlington High School Ethics Bowl, the central regional organizing director for Generation Ratify, president of the Women’s Equality Club, and co-chair of the Arlington Collegiate Academy. 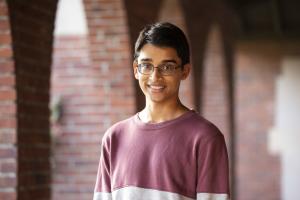 Throughout his high school years, Kaushal Raghu worked to make positive change in his community, adopting the ethos that “learning is something that everybody deserves, no matter who they are, what they believe in, or where they come from,” he says. “I have tried my best throughout high school to not only gain knowledge, but to also impact as many people as I can.” Raghu's efforts included serving as the president of Future Physicians of America and vice president/founder of the Climate Change Initiative Club. Raghu also spent time outside of school volunteering at the Veterans Affairs Hospital, an activity he hopes to continue at a hospital near University of Puget Sound.

Raghu says he chose University of Puget Sound because it is “the perfect catalyst for my goals and development of leadership skills. With Puget Sound's personalized health professions advising, I can use expertise and knowledge to help me earn shadowing, scribing, and research opportunities to advance my knowledge in the fields that I'm passionate about.” Raghu plans to study biology, psychology, and neuroscience.

About the Matelich Scholars Program

The Matelich Scholars Program was established in 2010 through the generosity of George E. Matelich ’78 and Susan E. Matelich, who wish to provide future generations of students with the opportunity to pursue a life-changing Puget Sound education. Both were the first members of their families to graduate from a four-year college. George Matelich is senior advisory partner of Kelso & Company, chair of the American Prairie, a past member of the Stanford Graduate School of Business Advisory Council, and a trustee emeritus at University of Puget Sound. Susan Matelich serves as a member of the American Prairie Board of Directors and the New York Botanical Garden Board of Trustees. She is also board treasurer and an emergency medical technician-B and treasurer for the Town of Mamaroneck/Larchmont Volunteer Ambulance Corps, among other volunteer activities. Two Matelich Scholars are selected each year from the incoming first-year class.

For information about eligibility for the Matelich Scholars Program, contact the Office of Admission at 253.879.3211 or visit pugetsound.edu.