TACOMA, Wash. – Josh Cunningham of Boise, Idaho, and Gwen Lindberg of Minneapolis, Minn., have been named University of Puget Sound Lillis Scholars. The university's most prestigious and competitive award honoring incoming students for their academic excellence, the Lillis Scholarship covers tuition, fees, and room and board for up to four years.

Lillis Scholarships are generously funded by a gift from Gwendolyn H. Lillis P’05 and Charles M. Lillis P’05 through The Lillis Foundation. Lillis Scholars thrive on learning and exploring ideas, and are chosen for their outstanding academic performance, intellectual independence, and drive to pursue excellence throughout their lives. Cunningham and Lindberg are members of Puget Sound’s Class of 2025, and join a cohort of 26 Lillis Scholars named since the program began awarding the scholarship in 2008. 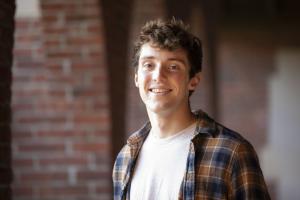 Josh Cunningham is a three-star recruit for the Puget Sound swim team, having served as the captain of his high school team and as a House of Delegates meeting representative for the Boise YMCA. Regarding his decision to attend the University of Puget Sound, Cunningham says, "Receiving this award has shown me that [Puget Sound] is a place where people believe in me and are invested in my future. When I first visited Tacoma, I was overwhelmed by the beauty of the campus and the inviting culture of the students and swim team. I'm thrilled to experience both academic and athletic growth as I begin my journey as a Logger this fall."

Beyond his dedication to swimming, Cunningham was a team member and assistant coach for First Robotics: First Lego League, where he helped mentor young students who are interested in learning more about STEM fields. Cunningham also served as president for the National Honor Society, and volunteered as a leader for the mental health club Sources of Strength and as a counselor for the spirit crew at Tree City Church. Cunningham is interested in art, both traditional and digital, and can be found painting, drawing, and doing calligraphy in his free time.

During college, Cunningham hopes to study computer science, biochemistry, and art. In addition to being a student-athlete, he plans to become involved in the outdoors program. 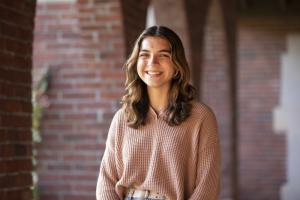 Gwen Lindberg has a deep passion for environmental issues, as is reflected in her service as the co-president of the Southwest Green Team, a club focused on fighting climate change through education and service, as well as her work at a greenhouse and garden center. Lindberg further explored her interest in environmental sciences by serving as a citizen science volunteer with Earthwatch, through which she completed scientific research in Kenya on the development of more sustainable agricultural practices.

Regarding her choice to attend the University of Puget Sound, Lindberg shared: "Even through a virtual decision-making process, Puget Sound stood out as an incredible community, one I am so excited to become a part of. As I learned more about the experiences I would have at University of Puget Sound, from exploring campus and the Pacific Northwest to studying uniquely intersectional programs, it was easy to see that it would be a great fit."

In addition to her climate activism and fondness of nature, Lindberg played volleyball on her high school team and with a club, was the service coordinator for the National Honor Society, volunteered at the zoo, and was the student election judge for the city of Minneapolis voter services. Lindberg was accepted into the Honors Program and hopes to study chemistry, math, and/or environmental policy and decision making, and plans to study abroad. Outside of academia, she hopes to participate in the outdoors club, community service, and intramural sports.

About the Lillis Scholars Program

The Lillis Scholars Program was established in 2007 through a generous gift made by The Lillis Foundation to recognize academic excellence and encourage intellectual independence. Gwen Lillis is chair of The Lillis Foundation; a trustee of the University of Puget Sound; and chair of the board of advisors at the University of Oregon Lundquist College of Business. Charles Lillis is former chair and chief executive of MediaOne Group, founding partner of LoneTree Capital Management, and chair of the board of trustees at the University of Oregon. Gwen and Charles are the parents of Puget Sound alumna Jessica Baker Isaacs ’05. Each year, two Lillis Scholars are selected from the incoming first-year class.

For information about eligibility for the Lillis Scholars Program, contact the Office of Admission at 253.879.3211 or visit pugetsound.edu.