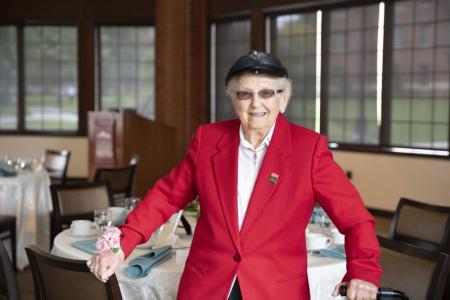 Jacquie grew up in France and arrived in Seattle, alone, in 1939 at the age of 17, at the onset of World War II. Among other challenges she overcame during a harrowing departure from France and journey across the Atlantic, she arrived not speaking any English—a language and a subject she would soon master, along with Spanish, Russian, German, and a bit of Japanese.

Within a very short period of time, she enrolled at the University of Washington where she excelled in her studies and began her first foray into teaching while still a junior. Little did she know that this would ignite a lifelong passion for teaching.

It was at the UW that she met Laura Butler, a classmate who went on to become the first woman ordained in the New England Conference of the Methodist Church. Jacquie and Laura became fast friends, not just throughout college but during their budding professional careers. Laura’s career was in the church. As a 22 year old, she started Skyway Methodist Church as a way to serve the newly arriving Boeing workers to South Seattle and later served in Victoria as a minister of Christian education. She continued to preach until the age of 90. Jacquie’s career was as a professor. She taught French at Puget Sound from 1948-87, chaired the Foreign Languages Department, and directed a master’s program in comparative literature in the 1970s.

These two accomplished women remained friends until Laura’s passing, just two years ago, at the age of 97. Laura discussed with Jacquie her desire to honor her in her will, and we understand that Jacquie told Laura that “any gift to me should be made to ‘my Puget Sound.’”…where her life was everything that she wanted, working with faculty who were also friends, and continuing to mentor and stay in touch with her students, even today.

All of us at Puget Sound are deeply moved by Professor Martin’s story and contributions to Puget Sound over so many decades, and by the generosity of the Rev. Laura Butler, whose tribute to her dear friend will support the work of the students and faculty of the university that was, and is, so central to Jacquie’s life. 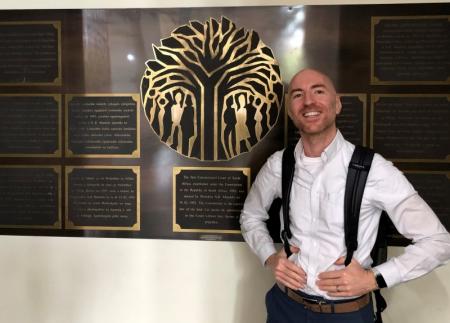 In my research I focus on the role of international law in domestic politics. When do governments protect their citizens’ human rights, and why do they so often fail? And when governments do fall short, can individuals use the law as an effective means of enforcing their rights—or is the law an empty promise? How can courts protect rights when governments won’t?

My junior sabbatical allowed me to learn more about these processes by focusing in-depth on one country: South Africa. The country continues to grapple with the legacy of Apartheid nearly three decades after Nelson Mandela and the ANC led the transition to democracy. In the years since, many South Africans have turned to the courts to enforce human rights, with mixed results. My goal was to understand better the way politics and law interact to achieve—or fail to achieve—the rights guaranteed under international law.

I had studied and written about South African law and politics before, but I had never had the opportunity to visit the country in person. It has been a longterm goal to do research in the country, and sabbatical allowed me to visit the locations where law and politics actually happen and to meet with constitutional advocates, legal scholars, and political activists. The highlight was without doubt attending oral arguments at the Constitutional Court during a dispute in which an opposition party accused the president of the republic of corruption. For an American, this was familiar politics in an unfamiliar setting.

Like all Puget Sound faculty, though, being a teacher scholar means bringing research back to the classroom. I was able to do this while still on sabbatical by teaching in a graduate law course at the University of Cape Town, in South Africa’s Western Cape. The goal of the course was to situate law and society discourses—most of which originated in North America—in the African context. I was invited to teach a class on judicial politics as part of the course, but I also benefited immensely by meeting and learning from the other faculty from across Africa, Europe, and North America who were participating in the series.

Lynda works with the student financial literacy group, Four Horsemen Investments (4HI), who inaugurated the first finance conference for students throughout the region, hosted by University of Puget Sound.

The University of Puget Sound hosted the first Northwest Collegiate Finance Conference in May.  This conference brought together managers of regional student-managed funds for a day of sharing current practices and best ideas.  The conference was the brainchild of members of UPS’s student-run financial literacy not-for-profit Four Horsemen Investments (4HI), and featured presentations by representatives of the Puget Sound Investment Club’s Pros Ta Akra investment fund, PLU’s Mary Lund-Davis undergraduate student investment fund, and Willamette University’s student venture fund.  4HI members shared the presentation on portfolio skewness that they had given at the Global Conference on Business and Finance in Las Vegas in January, 2019.  Tim Allen, CFA, Retirement Director and Chief Investment Officer for the $1.3 billion Tacoma Employees Retirement Fund, gave the morning keynote address, and Patrick Adrian, CFA, research manager at eVestment, gave the lunchtime talk.  Students also participated in a sell-side equity research challenge, judged by local financial market professionals.  We hope this is just the first of many annual Northwest Collegiate Finance Conferences!