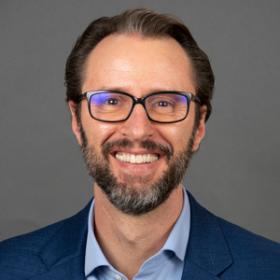 Dr. Robert Hutchinson teaches music theory, orchestration, analysis, counterpoint, improvisation, and composition. He received his Bachelor of Arts in Music in 1992 at California State University, Bakersfield, his MMus in 1993 from Northern Arizona, and his PhD in 1998 from the University of Oregon.

"Puget Sound provides the ideal setting for working with highly motivated students individually and in small groups. Students know I care about providing them with skills they can use after graduation, whether they’re performers, educators, or scholars," says Professor Hutchinson. This dedication to teaching earned him Thomas A. Davis Teaching Awards at the University of Puget Sound in 2007 and 2010.

In 1997, Hutchinson won the Third Angle New Music Ensemble’s Young Composers Competition with his Three Character Pieces. His composition Jeux d’Enfants was selected by the Charles Ives Center for American Music for a June 2002 premiere by the Charleston Symphony Orchestra at the Piccolo Spoleto Festival in South Carolina.

The Tacoma Youth Symphony commissioned and premiered From the Sea to the Stars in 2004. Also in 2004, Hutchinson’s composition Dancing on the Strand for wind ensemble was performed at the 29th Symposium for New Band Music in Richmond, Virginia; at the Southwestern Division College Band Director’s National Association (CBDNA) Conference in Fort Worth, Texas; at the Society of Composers’ National Conference in Edmond, Oklahoma; and received an honorable mention in the competition for ASCAP’s 2004 Rudolph Nissim Award.

In 2006 the Northwest Sinfonietta commissioned and premiered Fantasia on Themes of Mozart in Seattle. The Tacoma Concert Band premiered the commission As the Blue Night Descends upon the World in 2007. In 2009 Hutchinson’s three-movement, 25-minute Concerto for Amplified Violin and Wind Ensemble was premiered by violinist Maria Sampen at the University of Puget Sound. Pas de Quatre for string quartet was commissioned and premiered in 2010 at the Walla Walla Chamber Music Festival.

In 2013, Hutchinson’s song cycle The House of Life was premiered in London by mezzo-soprano Dawn Padula and pianist Soojeong Joo. It was subsequently recorded on Padula’s album, Gracious Moonlight, in 2017.

The three-movement Bird Suite for oboe and bassoon was premiered in Oberlin in 2015. Hutchinson’s Sittin’ In A Tree for flute and bassoon was performed in 2016 by Hannah Hammel and Benjamin Roidl-Ward in New York City, Boston, Chicago, Houston, Richmond VA, and Oberlin OH.

In 2019, he completed a multi-movement work for the Gewandhaus Brass Quintett, which will be included on their CD and premiered at the Leipzig Gewandhaus in December 2019.

Hutchinson hosted the Society of Composers Region VIII conference in 2010 and 2014, and hosted their National Conference at the University of Sound in 2018.

Hutchinson is also a jazz bassist and performs professionally in the Seattle-Tacoma area, most frequently with the jazz-fusion group Velocity.

Music Theory for the 21st-Century Classroom

Professor Rob Hutchinson’s innovative online music theory textbook, used in his theory classes, is a free resource available to all.

Dr. Hutchinson aimed to make the text relevant to 21st-century musicians by including popular music, musical theater, film music, and jazz throughout