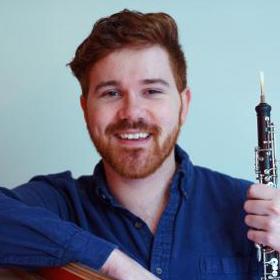 Logan Esterling is an active performing artist and teacher who currently holds the English Horn position with Symphony Tacoma and Yakima Symphony.

As a Seattle freelance musician in demand, he performs regularly with local orchestras such as the Seattle Metropolitan Chamber Orchestra, Tacoma City Ballet, North Corner Chamber Orchestra, among several others. Outside of his orchestral jobs and local freelancing career, Mr. Esterling has performed with accomplished artists including Andrea Bocelli, Josh Groban, Evanescence, Lindsey Stirling, and “Weird Al" Yankovic.

He is also involved in the Seattle recording scene and has recorded music for the video game Destiny 2, for the DreamWorks short Bird Karma, and for prominent modern composers such as Christopher Tyler Nickel.

In his private lesson teaching studio, Logan Esterling has led many students to succeed in local and state auditions. He writes, “I am passionate about enabling students to achieve the definition of success most important to them.”

Additionally, Mr. Esterling has served as a coach for the Collaborative Musicians’ Project, a quarterly chamber music program for middle school and high school students.

In July 2020, Logan Esterling started a company called Reedesign. This reed making company utilizes machine learning to amass thousands of data points from hundreds of reeds in order to attribute certain variables for creating specific outcomes and to predict the quality of the finished reed early in the reed making process.

Mr. Esterling earned a Bachelor of Music degree from the University of Washington, where he studied with Mary Lynch, principal oboist in the Seattle Symphony.