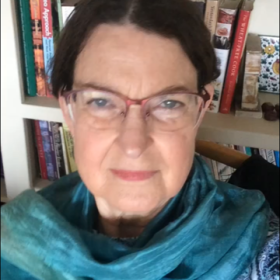 Professor Kay’s research interrogates oppression theories, virtue ethics, and issues of intersectionality. Her most recent publication is “Jews as Oppressed and Oppressor: Doing Ethics at the Intersections of Classism, Racism, and Antisemitism” (in Judaism, Race, and Ethics. Ch. 4. Edited by Jonathan Crane, University Park, PA: Penn State University Press, 2020). Since 2003, she has worked with the university’s Race and Pedagogy Initiative.

"Aquinas and Hume: The Implications of Moral Anthropology for the Responsibility and Blameworthiness of Trauma Survivors" (under consideration with The Journal of Religious Ethics)

"Middle Agents as Marginalized: How the Rwanda Genocide Challenges Ethics from the Margin." Journal of the Society of Christian Ethics. 33:2 (2013): 21-40.

“Murder Victims’ Families for Reconciliation: Story-Telling for Healing, as Witness, and in Public Policy.” In Handbook of Restorative Justice: A Global Perspective (pp. 230-245). Edited by Dennis Sullivan and Larry Tifft. New York: Routledge, 2006.

“In the Shadow of the Execution Chamber: Affirming Wholeness in a Broken Place.” In Practice What You Preach: Virtues, Ethics and Power in the Lives of Pastoral Ministers and their Congregations. Edited by James Keenan, S.J. and Joseph Kotva, Jr. Franklin, WI: Sheed & Ward, 1999, pp. 115-127.

[This book won first prize for a book on pastoral ministry awarded by the Catholic Press Association.]

My research area is moral psychology in light of oppression theory with a focus on those who occupy dominant roles in society.

My book, Murdering Myths: The Story Behind the Death Penalty (Rowman & Littlefield, 2005) examines American's deep-seated allegiance to a narrative that justifies violence as a means of justice. Drawing on interviews with death row prisoners and families who have lost loved ones to murder, I show how this story is shared by all. Yet some family members are beginning to tell a new narrative that calls for moral vision and for citizens to play a new role this new script.

My current book project, Human Liberation: Habit and Vice, examines how liberationists understand how those in oppressor roles acquire habits that perpetuate the status quo. A model is presented of how habits are imposed on the young, and how people can undertake to dismantle their habits of subjugation.