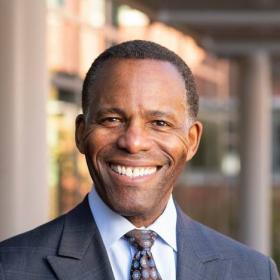 A distinguished scholar, teacher, and college administrator, Isiaah Crawford became president of University of Puget Sound on July 1, 2016, following an extensive national search. Crawford’s academic work and achievements as a senior administrator are closely aligned with the values and aspirations of Puget Sound, and with the key areas of challenge and opportunity facing higher education today.

Key areas of focus during his service to Seattle University included strategic planning; strengthening shared governance; securing grants and other gifts in support of fundraising objectives; supporting teaching, research, and service activities of the faculty; and establishing the Center for Environmental Justice and Sustainability, the Institute for Catholic Thought and Culture, and the School of New and Continuing Studies, which began operation in academic year 2015–16. Working with university leadership, he participated in the development of more than $200 million in key facilities projects, including renovation of the library and establishment of a learning commons; a new residence hall; a new fitness center and remodeled intramural athletic field; the School of Law annex; an admission and alumni center; and planning for a new science facility.

From 2004 to 2008, Crawford was dean of the College of Arts and Sciences at Loyola University Chicago, where he joined the faculty of the Department of Psychology in 1987 as an assistant professor and through the years was tenured and promoted to the rank of professor in 1999. He taught courses in psychology of personality, human sexuality, addictive behavior, human diversity, and minority mental health. He also served as graduate program director of the clinical psychology doctoral program (1994–97), Department of Psychology chair (1997–2003), and interim dean of the College of Arts and Sciences (2003–04).

A recipient of national awards, including three from the American Psychological Association, he has been published in numerous scholarly journals over the past 30 years—including, most recently, the Archives of Sexual Behavior, Journal of Homosexuality, Journal of Child and Family Studies, AIDS Care, and Journal of Psychology & Human Sexuality—on topics including post-traumatic stress, racial inequality, HIV/AIDS, sexual abuse, visual impairment, poverty, depression, and more. Crawford has served on the editorial boards of professional publications, including the International Journal of Sexual Health, Journal of Visual Impairment & Blindness, and Journal of HIV/AIDS Prevention & Education for Adolescents & Children. He is vice chair of the board of directors for the National Association of Independent Colleges and Universities, and also serves on the boards of The Annapolis Group, Independent Colleges of Washington, and the Northwest Conference, as well as the Tacoma Art Museum, Seattle Symphony, Providence St. Joseph Health (chair, Work/Life Committee), Providence Health Plan (chair, Governance Committee) and The ROPA Corporation (St. Louis).

Crawford’s numerous other activities include serving on the board of directors for Swedish Health Services (2010–12), AIDS Foundation of Chicago (1994–08; board president, 2004–06), and Horizons Community Center (1988–92). He is former president of the Clinical Psychologists Licensing and Disciplinary Board of the Illinois Department of Professional Regulation, and previously served on the national advisory board of the Sexual Orientation and Gender Institute (2006–08), National Institutes of Health Panel Review–AIDS and Related Research (1999–2002), and various roles with the American Psychological Association.