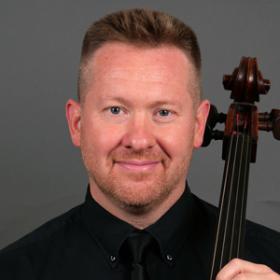 Cellist Alistair MacRae is the Cordelia Wikarski-Miedel Artist in Residence at University of Puget Sound School of Music and the cellist of the Puget Sound Piano Trio. He has appeared as a soloist, chamber musician, and orchestral principal throughout North America and in Europe, Asia, South America, and the Middle East. He is Principal Cello of the Princeton Symphony Orchestra and also performs with his wife, soprano Allison Pohl, in the voice and cello duo Soprello. In addition, he is a member of the Artist Faculty at the Brevard Music Center.

His playing has been praised for its "rich sound and lyrical phrasing" (Palm Beach Daily News) and his performances have been featured in radio broadcasts across the United States on WQXR, WWFM, WDAV, WCQS, KING FM, and Vermont Public Radio. As a chamber musician and recitalist, he has performed in Carnegie Hall’s Zankel and Weill Halls; at Palm Beach’s Kravis Center for the Performing Arts; in New York City chamber music venues such as BargeMusic, Merkin Hall, the 92nd St Y, and Miller Theatre at Columbia University; at numerous colleges and universities; and on concert series throughout the United States. He has appeared on several series presented by Carnegie Hall; as a member of groups such as the Richardson Chamber Players, Berkshire Bach Ensemble, and Fountain Ensemble; and at festivals such as the Walla Walla Chamber Music Festival, Central Vermont Chamber Music Festival, Monadnock Music, and Music Festival of the Hamptons.

A diversity of musical experiences enriches his performances and musical life.  He has appeared as a concerto soloist with the Asheville Symphony, with the Bombay Chamber Orchestra, and at the Brevard Music Center.  His past projects include recordings of chamber music by Kodaly, Telemann, and Laurie Altman; music for The Discovery Channel; and ensemble albums of music by Mozart and Scott Joplin. His eclectic collaborations have found him on stage with Paul Taylor Dance Company, the Westminster Choir, tap dancer Savion Glover, jazz bassist Ben Wolfe, the Paragon Ragtime Orchestra, and the rock band Scorpions.

A passionate advocate for new music, Mr. MacRae has commissioned and premiered new works for both solo cello and chamber ensembles, collaborating closely with composers. He has given premiere performances of 21st-century pieces at Princeton, Yale, Columbia, and Harvard Universities; and has performed his own compositions and arrangements in the United States and Canada.

In his role on the University of Puget Sound School of Music faculty, he teaches and mentors students in cello and chamber music. Formerly, he also served on the faculties of Princeton University, The College of New Jersey, and the Aaron Copland School of Music at Queens College - CUNY. For over a decade, he has spent his summers performing and teaching at the Brevard Music Center.