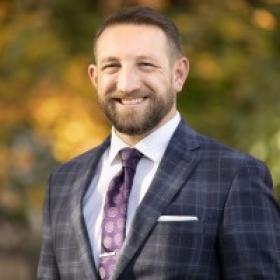 A long-time resident of the west coast, Robin has lived in California, Oregon, and Washington. At Puget Sound, he played trumpet in the Wind Ensemble, Jazz Band, and Orchestra, and was part of several student-run organizations. After graduating in 2004 with a B.A. in History and a minor in German, he moved to Frankfurt, Germany where he taught English at the Eduard-Spranger-Schule on a Fulbright grant. In 2007 he moved to Chicago in order to pursue his M.A. in Social Science.

Where are you from?
That's not an easy question to answer ... I went to high school in Klamath Falls, Oregon but I grew up as a Californian. Tacoma's now been home longer than anywhere else!

Do you have a favorite place in Tacoma?
The Theater district downtown. There's so many great places to go, whether to eat, drink, or spend time with family.

Name a class at Puget Sound you are interested in, but haven't taken.
Science and Economics of Climate Change. I think this is such a fascinating and important topic to be engaging with.

What is a book that has been influential for you?
Original Louis Maggio System for Brass, by Carlton MacBeth.