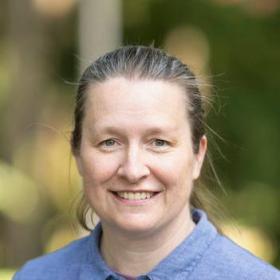 Kristin Johnson’s research focuses on the history of the life sciences. She authored the book Ordering Life: Karl Jordan and the Naturalist Tradition, a study of how the study of biodiversity and natural history museums have changed since the nineteenth century. Her historical novel The Species Maker, a fictional exploration of debates over evolution in the 1920s, was published by University of Alabama Press in 2021. Her current book projects include Imagining Progress: Science and Religion at the Bedside of America's Children 1690-1925 and Darwin's Falling Sparrow: Victorian Evolutionists and the Problem of Suffering. Her recent research has all been inspired by the teaching she does in the Science, Technology, Health and Society Program, where her courses include: Evolution and Society Since Darwin; Apes, Angels, and Darwin; Ecological Knowledge in Historical Perspective; History of Medicine; Evolution and Ethics; Cancer and Society, and Science and Religion: Historical Perspectives.

"The Return of the Geneticist: Theodosius Dobzhansky, Edward Chapin, and Museum Taxonomy," Journal of the History of Biology 55 (2022), forthcoming.

The Species Maker: A Novel (University of Alabama Press, 2021).

"The Best Panaceas for Heartaches," published in Creative Nonfiction 65 (2017) and Issues in Science and Technology (2017). Honorary Mention for a "Think-Write-Publish: Science and Religion" story writing contest.

“The Natural Historian,” pp. 84-96 in A Companion to the History of Science, edited by Bernard Lightman (Wiley-Blackwell, 2016).

“The return of the Phoenix: the 1963 International Congress of Zoology and American zoologists in the twentieth century,” Journal of the History of Biology 42(2009): 417-456.

“The Ibis: transformations in a twentieth century British natural history journal,” Journal of the History of Biology 37 (2004): 515-555.