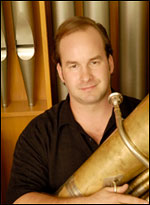 Ryan Schultz brings over two decades of experience and expertise from nearly every facet of the music industry to Puget Sound. Mr. Schultz is principal tubist of the nationally acclaimed Pacific Northwest Ballet Orchestra and the critically acclaimed Auburn Symphony Orchestra. Schultz has performed as guest principal tubist for Seattle Symphony on numerous occasions and has also performed in that capacity with many other orchestras, most notably: Seattle Opera, Eugene Symphony, Tacoma Symphony, Bolshoi Ballet, Bellingham Festival of Music, the orchestra for the touring musical Chicago at Seattle's Paramount Theater, and with trombonists from Oregon Symphony at the Ernest Bloch Festival. Mr. Schultz has played cimbasso (valve contrabass trombone) with Seattle Opera and has also performed on bass trombone with Northwest Sinfonietta, Bellevue Philharmonic, and Yakima Symphony. From 2000-2015 Ryan was Principal Tubist of the Yakima Symphony Orchestra; in that role he performed extensively throughout Central Washington, was a soloist at an educational outreach concert, and also took his turn directing the YSO’s educational brass outreach efforts to elementary schools.

Originally from Wisconsin, Mr. Schultz enlisted in the United States Army while finishing his undergraduate studies. From 1996-1999 he was a member of U.S. Army's "I Corps Band" (56th Army Band) where he performed as solo tubist and also on both euphonium and bass trombone. He has performed and given clinics throughout the United States both alone and with a variety of ensembles ranging from Dixieland Jazz groups to brass quintets. Highly in demand as a clinician, teacher and adjudicator, Mr. Schultz has adjudicated for the International Tuba and Euphonium Association, Music Teacher’s National Association and, among others, the Washington Music Education Association’s State Solo and Ensemble competition. He has performed numerous world and West Coast premiers of both new orchestral and wind band music under the batons of Maestros Gerard Schwartz, Giancarlo Guerrero, Emil de Cou, Michael Palmer, Alastair Willis and numerous others. Orchestral Pops highlights include performances with Doc Severinsen, Empire Brass, the Brubeck Brothers, and conductor/composer of the Lord of the Rings movie music, Maestro Howard Shore. Mr. Schultz has performed for numerous dignitaries including President Nelson Mandela, former Vice-President Al Gore, Senator Maria Cantwell, and a host of military officials. In 2013, Mr. Schultz made his New York debut with the critically acclaimed PNB Orchestra. Alastair Macaulay, in the New York Times, wrote, “Prokofiev’s celebrated score for “Romeo and Juliet” has never sounded better in the theater, in my experience, than at Pacific Northwest Ballet’s two performances on Saturday at City Center.” Of the evening performance, he wrote, “the brass players were flawless.”

Mr. Schultz has a keen interest in pedagogy. He holds teaching positions at University of Puget Sound, Lakeside School, Music Center of the Northwest, and with Seattle Youth Symphony Orchestra (SYSO). Previously, he has taught at Music Works Northwest, Central Washington University and, among others, at Lawrence Academy of Music. His students have won numerous awards and top prizes in international, national, regional and Washington State solo competitions and have gone on to win major fellowships and to perform with major symphony orchestras (Boston and Seattle). Mr. Schultz did his post graduate study at the University of Washington and earned his Master of Music degree from Central Washington University in music performance/pedagogy; he completed his other musical studies at Lawrence Conservatory, U.S. Navy School of Music, and the Aspen and Tanglewood Music Festivals. He studied primarily with Nick Keelan, Abe Torchinsky, Steve Fissel, and, later in his career, with Chris Olka. His chamber music studies were with American and Empire Brass Quintets. Mr. Schultz has also studied privately and/or in master classes with John Rojak, Matt Good, Per Brevig, Chester Schmitz, Kenneth Amis, Ed Diefes, Eric Ruske, Sam Pilafian, Dan Neesley, David Stull and Brian Martz. In 2015, Mr. Schultz presented his paper entitled Career Paths for Low Brass Players at the Northwest Regional Tuba and Euphonium Conference. From the ITEA Journal, “Clear, honest, yet motivating, this presentation was a hit with the audience”. Ryan has also performed as a soloist at the NWRTEC on multiple occasions. The ITEA Journal also wrote, “Ryan Schultz performed an entertaining interpretation of the standard "Effie" Suite by Alec Wilder.”

At Music Center of the Northwest, Ryan is the Director of Educational Outreach and Partnerships. In that role at Seattle’s oldest community music school, he hopes to bring music and musical instruction into the lives of students who might not otherwise be able to afford it. For his work on behalf of Music Center, Ryan was recently recognized by international instrument manufacturer Conn-Selmer as a “Very Important Person” in music education. Ryan has been a tireless ambassador for Music Center both in Seattle and across the country, resulting in recognition, new partnerships and new sources of funding for the organization. Dedicated to the arts and the non-profit mission, Mr. Schultz has served on the Board of the Lake Union Civic Orchestra and currently serves on the Board of Directors of the University Congregational Housing Association.

At the University of Puget Sound, Ryan has been instrumental in bringing internationally acclaimed artists such as Alan Baer, John Rojak, American Brass Quintet and, among others, Steven Mead to the campus. The 2014 Puget Sound Romantic Bass Trombone and Friends recital with Mr. Rojak was one of the performing highlights of Ryan’s Puget Sound tenure.

In 2016, Ryan returned to New York’s City Center with PNB—again, with critical acclaim, presented a paper at New York University, and, upon returning to Washington, was in residence at the Lower Columbia College—culminating in a performance of Edward Gregson’s Concerto. Maestro Rob Davis on the residency: "Ryan Schultz is an artist of outstanding ability. His performance of the Gregson Tuba Concerto with the LCC Symphonic Band was most impressive. Gorgeous tone, powerful expressive control, deep artistic sensitivity, and rock solid technical mastery were all on display during Ryan's interpretation. His friendly personality and positive energy made our collaboration a great pleasure and he was a favorite of the ensemble members, who learned much from his engaging masterclass and by observing his professional musicianship in rehearsal and performance."