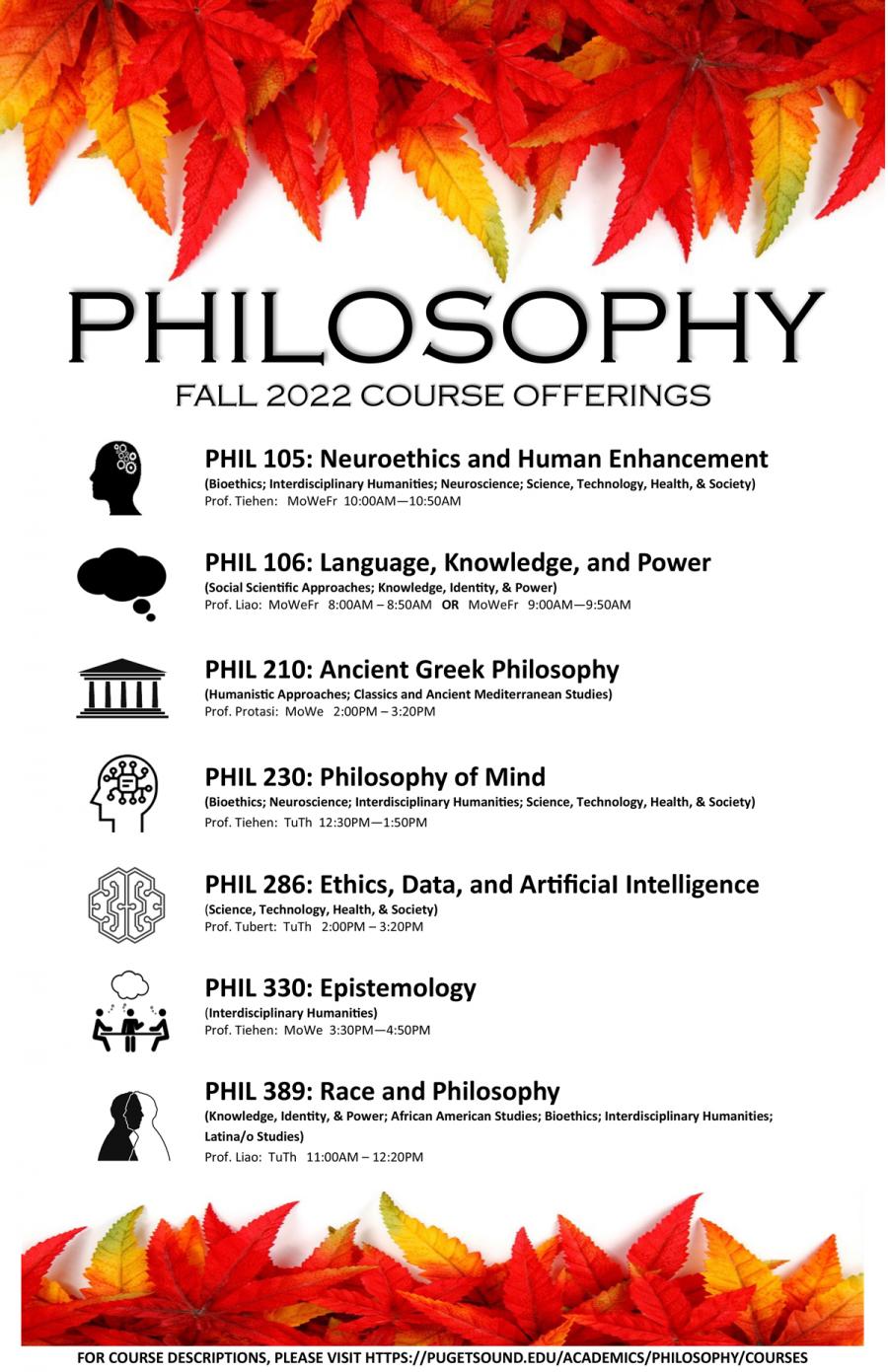 PHIL 105A – Neuroethics and Human Enhancement

This course examines the ethical, political, and philosophical questions raised by some of the new forms of human enhancement made available by breakthroughs in science and technology, from fields like neuroscience and genetic engineering. For example: Should parents be allowed to use genetic screening or modifications to create “designer children,” either for the purpose of avoiding diseases and other ailments or to select desired traits such as their child’s intelligence, athletic ability, or good looks? Should humans pursue immortality or, failing that, radically extended lifespans? Is there any important ethical difference between artificial and natural intelligence, and will the former soon surpass the latter: What justification is there, if any, for regarding the use of steroids in athletics as a form of cheating while regarding the use of weight training regimens as fair game? Is the goal of human enhancement compatible with the pursuit of social equality? What constitutes the self, as opposed to the tools or pieces of technology that a self uses?.

This course investigates the ways in which power relations-such as racism, sexism, and ableism-structure two significant areas of individual and collective behavior: language and knowledge. It shows the necessity of philosophizing in critical engagement with the world by connecting social phenomena with social scientific theories. It also shows philosophy’s strength in making fundamental inquiries and bridging academic disciplines by drawing on diverse types of empirical evidence.

A survey of the origins of Western philosophy in Ancient Greece, beginning with the Presocratics and covering Socrates, Plato, Aristotle, and Hellenistic philosophy. In this course students are introduced to the answers some of the most influential ancient philosophers have given to the question: “How can we be happy?” In addition to learning what these philosophers thought, students are stimulated to think about these questions from their own modern perspective, and reflect on the extent to which their modern viewpoint differs. Finally, but not least importantly, students learn to read and interpret texts that were written millennia ago. In the process, they encounter argumentative techniques that are still as current as the theses defended through them.

PHIL 230A – Philosophy of Mind

This course introduces central issues in the philosophy of mind, especially the relation between mind and body - the brain, in particular - and the nature of consciousness. Other topics may include the possibility of artificial intelligence, the nature of psychological explanation, self-knowledge, psychopathology and psychopharmacology, psychoanalysis, and the concept of a person. Course materials reflect scientific developments in such fields as psychology, neurobiology, medicine, linguistics, and computer engineering.

This course focuses on social, economic, legal, and ethical issues that arise from the collection, analysis, and use of large data sets, especially when these processes are automated or embedded within artificial intelligence systems. The course explores the design of ethical algorithms by considering questions like the following: what kinds of biases are ethically problematic and how can they be avoided? What are the effects of automation on jobs and inequality: What are the privacy considerations that arise when collecting and using data? What is the ethical significance of transparency in automation? Who owns data sets and who has the right to access information: who is responsible for actions that result from artificial intelligence systems? In thinking about these complex questions, students consider specific case studies of controversial uses of data and algorithms in fields such as medicine, biotechnology, military, advertising, social media, finance, transportation, and criminal justice, among others. In addition to relevant ethical theories, students are introduced to philosophical, legal, and scientific theories that play a central role in debates regarding the ethics of data and artificial intelligence. Readings are drawn from a number of classic and contemporary texts in philosophy, science and technology studies, law, public policy, and the emerging fields of “data ethics” and “robot ethics”.

Epistemology, otherwise known as the theory of knowledge, addresses issues about the nature of knowledge, justification, and truth, issues that arise from questions such as “How do you know?” and “Can you be sure?” It has been an especially lively area of philosophy in English in recent decades; many currents in the humanities appeal to epistemological notions-such currents as post-modernism, relativism, social constructionism, feminism, and situated knowing. This course answers both developments. It introduces such disciplinary concerns as foundationalism, virtue epistemology, internalism and externalism, naturalism, reliabilism, and the Gettier problem. It also engages such wider concerns as relativism about truth and reason and the role of social institutions and social structures, power and privilege, in constituting knowledge.

PHIL 389A – Race and Philosophy

The construct of race is omnipresent in the way people think, the way society is structured, and even in the materials that people use. Despite its omnipresence, race remains difficult to discuss, if it is discussed at all, because of its theoretical complexity, contested social history, and emotional triggers. This course challenges students to engage in courageous conversations about the nature of race and its relations to mind, language, and aesthetics. Student will confront difficult questions such as: What is race: How does race influence human cognition: How does race structure human communication: How does race shape human aesthetic preferences and artistic endeavors: Students use tools developed in different areas of philosophy and its cognate disciplines to construct answers to these difficult questions about race. At the same time, students learn that these difficult questions about race can challenge and extend common conceptions of analytic philosophy.

Other Courses Taught by Philosophy Professors:

The course will be centered on a number of existential issues and different attempts, past and present, to address these issues. The first part of the course focuses on different conceptions of the good life and the roles played by pleasure and reason in achieving happiness. The second part of the course is centered on different perspectives towards death and immortality. The third part of the course considers what, if anything, can make a life meaningful; how meaning may differ from other values such as happiness; and exploring the notion of the absurd or the possibility that life may be devoid of meaning. The fourth and last part of the course will focus on freedom and choice -- particularly, significant, life altering, transformative choices. Through the careful exploration of philosophical ideas and texts from various time periods and written in different styles, students will explore different perspectives on these existential issues while developing their skills in writing, reading, oral discussion and presentation, among others.

What is happiness and how can human beings achieve it? Can a bad person be truly happy or is moral virtue required for happiness? Is suffering valuable, and if so, should we pursue suffering? Is it better to be detached and invulnerable from loss, or are love and attachments always worth the risk? Do emotions give us any knowledge? What does it mean when cognitive scientists talk about “the divided mind”? What is implicit bias and how can we fight it? What does it mean that race or gender or disability are a “social construct”? These are questions concerning human flourishing that both philosophers and scientists have contributed to answer, or to attempt to answer. In this course, students are invited to engage in a variety of debates concerning happiness, morality and identity. Readings range from ancient primary philosophical texts to contemporary cognitive science articles.