Steve Wehmhoff '77 “We’re selling stuff that does your soul good.” That’s how Steve Wehmhoff ’77 describes the work he enjoys in record distribution, now as the director of label management and classical music for Entertainment One. The journey to his current position is a marvelous tale.

With ambitions of becoming a film composer, Steve entered Puget Sound in 1973, a “legacy” student whose parents graduated from the College of Puget Sound in 1949. A percussionist, he studied composition with Leroy Ostransky and Lawrence Ebert, occasionally writing arrangements for Puget Sound’s Wind Ensemble. He followed graduation by starting composition studies at UCLA. Life, then, took its own direction.

The music record business was part of his family’s blood, so it may not be surprising that it drew in Steve’s attention. Both his parents were in the business, first in Seattle, and then in Alaska, sometimes working for competitors. Steve describes his father as “the best salesman in the world,” although he thought his mother was more organized and, in the end, more successful. The draw to record retail, and eventually distribution, was natural.

Steve began at Wherehouse Records in California. After working in retail for 14 years, he became a classical music buyer, working for a one-stop (a record distributor who represents many labels and works with both retail chains and independent stores), Abbey Road Distributors, where he worked for four years. He also became involved with the National Association of Record Merchants, and eventually became a sales representative for Sony Classical, first in San Francisco, then New York City. During his four years at Sony, Steve worked with top performing classical artists. He also was involved in the promotion and distribution of the soundtrack to the movie Titanic, which sold 10 million units in its first four months. In 2000 Steve began working for Koch International, where he continued after Koch was acquired by Entertainment One five years later. Currently Entertainment One has the largest market share among independent distributors.

Steve has worked with many of the major classical artists of the last 25 years. A recent meaningful success for him has been his work with violinist Anne Akiko Meyers, whom he brought over to Entertainment One from RCA. At a time when her recording career needed a boost, he invested his interests in her. That investment has paid off handsomely. In 2012 Meyers’ third album, Air: The Bach Album, featuring conductor Steven Mercurio and the English Chamber Orchestra, debuted at No. 1 on the classical charts and stayed there for six weeks.

While Steve takes great pride in his work, it is more than ambition that has produced his successful career. He has enjoyed great camaraderie in the music industry, which he describes as a global village, a small town that for him has included direct, face-to-face projects with the Canadian Brass, Christoph Eschenbach, the Five Browns, Leon Fleischer, Hilary Hahn, Matt Haimovitz, Joe Jackson, Tim Janis, Yo Yo Ma, Bobby McFerrin, Christopher O’Riley, the Philadelphia Orchestra, John Rutter, Nadja Salerno-Sonnenberg, Isaac Stern, Frederica von Stade, guitarist John Williams, and many more. He emphasizes the importance of teamwork and of having fun with what one does. He may not have become that film composer he originally envisioned in the early ’70s, but other creations of his have brought fulfillment to an audience of millions and success for many a recording artist. 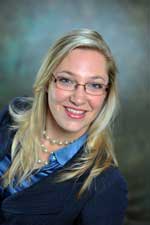 Careers can move in surprising directions, and often quickly. So is the case with Cara Cantonwine '05, who earned a degree in music education and performance. In January 2016 she was appointed as the Executive Director of the Portland Symphonic Choir.

After graduating from Puget Sound in 2005, Cara married and began working at Nordstrom. Her excellent organizational and interpersonal skills were apparent to her supervisors, and soon she found herself in the company's management program. But it wasn't the right fit; Cara had the urge to do something in music business. When she learned about an internship opportunity working for a summer concert series in Vancouver, she gave up a promising career in retail for a temporary job that paid below minimum wage. Risky? Yes. Following her dream? Yes!

Cara's talents are many, so it comes as no surprise that her role grew beyond that of a normal intern. The job developed into a full-time position working for the mayor and city manager-all in the stretch of four years. Cara managed all city-produced events, and she oversaw permits for other events in the city. As a trained musician and educator, and as a knowledgeable concert promoter (while on campus, she worked as a special events programmer for ASUPS), Cara was able to talk the talk and walk the walk, enabling her to build strong relationships with musicians and producers. Her good work did not go unnoticed. In 2008, Cara was recognized as one of Vancouver Business Journal's "Accomplished & Under 40" award recipients.

It was no surprise then that people took notice of her, and in 2011 Cara's career took another direction. The Fort Vancouver National Trust courted her away, naming her the Director of Programs. FVNT is the non-profit organization that supports the Fort Vancouver National Site and manages the Historic Officer’s Row and West Barracks properties. Cara was responsible for the annual Veterans Parade, Flag Day Ceremony, Marshall Public Leadership Award program, Marshall Youth Leadership Award program, Independence Day at Fort Vancouver celebration, and Marshall Lecture series which has hosted such notables as Madeline Albright, Colin Powell, Tom Brokaw, and others.

Then opportunity knocked again, this time with a professional ensemble she has sung in for many years: the Portland Symphonic Choir. As its new executive director, Cara looks forward to furthering the mission of this highly respected ensemble through greater community engagement, exploring more community partnerships, and strengthening an organization that already enjoys success. This new role gives her the opportunity to combine her extensive experience in the non-profit world with her passion and love for music – a real win-win for all!

As a student, Wayne Ledbetter '95 looked for opportunity. "I was in every band imaginable," says Wayne. Jazz Band, jazz combos, Wind Ensemble, University Band, concerto soloist, his own rock band (The Undecided): Wayne and his saxophone were ubiquitous. He also developed interest in another side of music: the business of music. In his freshman year he helped moving equipment for concerts. His sophomore year he helped a friend run Cultural Events; in his last two years, he got the nod to lead it. Clearly, the bachelor of music degree he earned with elective studies in business was the right fit.

For his required internship Wayne went to Los Angeles and accepted three, one at Columbia Records, the second for Island Records, and a third with Arista Records. It was through his work with Arista and Columbia that he came across a demo and sent to go see a group called Third Eye Blind. It was to prove to be his break. Wayne later moved to San Francisco to start up a company called EGM, Inc with Eric Godtland and under this company, Third Eye Blind shot to national stardom and sold nearly 10 million records.

Wayne now represents about 70 artists through has his own company, Ledbetter Entertainment, placing their songs in television shows and movies. He also continues to play saxophone in several bands in the Pacific Northwest. Completing the circle, he now employs interns from Puget Sound, gaining new perspectives, he says, from the steady flow of their questions about music business.

Other alumni in and outside of Music active in music business or the music industry: