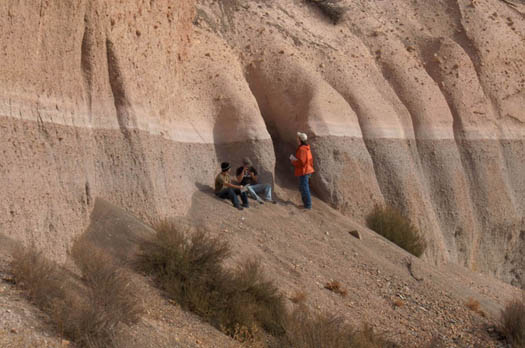 The history of the geology program at Puget Sound begins in 1924 with the hiring of Frederick A. (“Mac”) McMillin as an assistant professor of chemistry. Although his academic training was in chemistry, Mac had been the head of the Department of Chemistry and Geology at the Idaho Technical Institute in the early 1920’s and this may have contributed to his decision, not long after arriving, to set up a geology department at CPS (College of Puget Sound). Mac liked to say that he started with a “bucket of rocks” on the third floor of Howarth Hall (which at the time was an unfinished attic). Geology courses first appeared in the college catalog in 1925 and there were two: Structural Geology, which was equivalent to a physical geology course, and Historical Geology. Evidently Mac’s new geology classes were well received by the students because by the following year there were three additional course listings in the catalog (Economic Geology, Determinative Mineralogy, Geology of Washington) and a Minor in Geology was offered. In 1927 the CPS Geology Department won the “Best General Exhibit” award at the Northwest Mining Convention in Spokane and President Thompson later recalled that Mac had a following of “one-half to a dozen students each year and they literally worshipped the ground he walked on.” By 1931 the number of geology course offerings had blossomed to 14 and included Igneous and Metamorphic Petrology, Paleontology, Stratigraphy, Geology Methods and Mapping, and Field Geology. It is remarkable to note that, aside from a few years when he was assisted by Instructor Gordon Alcorn (later a faculty member in Biology) Mac taught all of these courses by himself!

The college gave approval for a B.S. degree in Geology in 1931 and the first majors graduated in 1935. Full-time tuition then was $68.50 per semester and total expenses (including room and board and books) were estimated at $476 - $637 per year. One way many CPS students met these costs was by working in the local lumber mills. The goal of the program during these years was to prepare students for jobs in industry and Mac allegedly once told President Thompson “Well, Doc, my students do not come here for spelling. They come here to learn geology, how to work with oil companies, and how to earn a living.” Beginning around 1946 the department taught its own field camp based at Staircase on the Olympic Peninsula, and this summer program continued until Mac retired.

During World War II geology enrollments were greatly diminished as many male students were assigned to officer training programs, but after the war ended the GI Bill ® stimulated a large increase in the number of students. To handle the increase in geology students, in 1946 CPS hired paleontologist Weldon Rau, a CPS graduate. Rau taught at CPS from 1946-1949 but then elected to pursue a more research-oriented career with the USGS and later the Washington Department of Natural Resources.

Norman R. Anderson began his long association with CPS as a freshman in 1940. His undergraduate career was interrupted by World War II, when he spent three years in the Navy in the South Pacific. After completing his tour of duty, he returned to complete his degree in 1946. Norm obtained his M.S. at the University of Washington and then, in the Fall of 1949 returned to CPS to fill in for Weldon Rau, who was away completing his PhD. This teaching assignment continued on a part time basis after Rau’s return and ultimately became a permanent job when Rau left the college. Norm was on the faculty at Puget Sound for the next 35 years, teaching courses in geomorphology, mineralogy, petrology, and field geology. Along the way he obtained his PhD from the University of Utah (1964), his dissertation focusing on the geology of an area near Oreana, Idaho. In addition to teaching CPS students Norm was very involved in teacher education, offering night classes, summer school class, and in-service programs for Tacoma area teachers. He was chair of the department until his retirement in 1985 and oversaw significant expansion of the department’s teaching collections, equipment, and facilities.

From 1955 to 1957, while Norm was gone from CPS, the college hired two geologists who stayed for only a year or two each, “Wild Bill” Foran, a well known petroleum geologist, and “Bull” Durham. Anticipating Mac’s retirement, the college in 1956 hired J. Stewart Lowther, a paleobotanist from the University of Michigan. Mac retired at the end of that year, Norm returned, and for the next 14 years he and Stewart were “the department.” During that time Norm continued to teach 101, geomorphology and the min/pet sequence while Stewart covered historical, paleontology, and sed/strat. Stewart’s career at Puget Sound spanned over 50 years, during which time the focus of the geology program expanded to include preparing students for graduate work. Together, Stewart and Norm supervised over 30 students who later went on to receive PhDs. Stewart retired from teaching in 2004, but continued to oversee the SEM lab and work with students until he passed away in 2008.

By the early 1960s the space needs of the program had grown significantly and the top floor of Howarth Hall was seriously overcrowded. This situation was remedied with the construction of Thompson Hall, and in 1968 the department moved into the south wing where it remains to this day.

In 1970 the department expanded to three faculty with the addition of Albert Eggers, a volcanologist from Dartmouth. Al assumed responsibility for the mineralogy / petrology courses and expanded the analytical facilities in the department by setting up an XRF. By this time undergraduate research was becoming a more prominent part of the curriculum and during his 30+ years at Puget Sound Al involved numerous geology majors in his work in Central America and at Mt. St. Helens. Al retired in 2001 but has continued his studies of gravity variations at active volcanoes.

Today the Geology Department has a full-time faculty of five. Barry Goldstein, a glacial geologist and geomorphologist from the University of Minnesota, joined the department when Norm retired in 1985. To meet the demand for more sections of Physical Geology and to maintain our growing teaching collections and equipment Ken Clark (M.S., Western Washington, 1987) came to Puget Sound in 1987. The department expanded to five in 1990 with the hiring of paleomagnetism-specialist and structural geologist Mike Valentine (UMass - Amherst, 1990). Jeff Tepper, an igneous petrologists and geochemist (PhD, University of Washington, 1991) joined the faculty when Al Eggers retired in 2001 and most recently Kena Fox-Dobbs, a stable isotope geochemist and paleontologist (PhD, UC-Santa Cruz, 2007) was hired to teach both “soft rock” courses that had been Stewart’s responsibility as well as courses in the growing Environmental Policy and Decision-Making program.