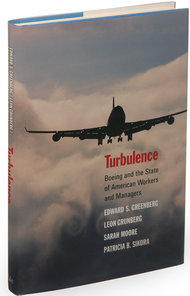 The Pain of Change at Boeing

Once upon a time, major American companies and their employees treated each other as family. The companies provided job security and lifelong benefits; in general, workers were loyal and engaged in their jobs, the occasional strike notwithstanding.

But that relative harmony ended with the advent of globalization, according to “Turbulence: Boeing and the State of American Workers and Managers” (Yale University Press, 238 pages), a meticulous and illuminating case study of the nation’s largest manufacturing exporter.

The book has four authors with a combination of academic and private-sector backgrounds: Edward S. Greenberg, Leon Grunberg, Sarah Moore and Patricia B. Sikora. Based on their research and experience, they write: “The very innovations and changes Boeing introduced to remain a leading producer of airplanes — altered management strategies, pervasive technological changes, extensive outsourcing, broad global partnerships, massive layoffs, and drastically altered ways of working — produced stress and turbulence in the lives of workers and managers alike.”

And the authors say Boeing’s woes are a cautionary tale for corporate America because the company suffered despite extraordinary advantages. “As one of only two manufacturers of large passenger jets in the world, Boeing occupies an extraordinary economic niche, and has had generally enlightened policies, along with strong unions to protect its employees,” the authors write. “Many American companies and their employees, in virtually every economic sector, face similarly strong competitive pressures but without Boeing’s advantages.”

The book focuses mainly on the period from 1996 to 2006, a span that encompassed the company’s merger with McDonnell Douglas, a strike by engineers and technical workers, ethics scandals in top management ranks, and the start of a major new passenger jet project, the 787 Dreamliner.

The research included four separate surveys, in 1997, 2000, 2003 and 2006. They tracked a cohort of 525 continuously employed Boeing workers and managers as well as scores of people who left the company during the course of the study.

After generally worsening between the first and the third surveys, employee attitudes toward the company showed some improvement by the 2006 poll, as some of Boeing’s changes took root. But according to the authors, morale issues remained.

One of the book’s most notable findings has to do with outsourcing. As seen in the production of the 787 Dreamliner, its new wide-body jet, the effects were decidedly double-edged. Two aims of the outsourcing were to cut costs and to gain access to more foreign markets; both of those goals were largely achieved.

But the parts contracts for the 787 were let to 135 sites in two dozen countries. In theory, the parts could be snapped and fitted together — much like pieces of a model airplane — at the Boeing plant in Everett, Wash. Yet in practice, the authors say, the process proved much more complicated, “something Boeing discovered to its considerable discomfort in 2008 and 2009 when many of the sections neither snapped nor fit properly.”) Production of the 787 would fall two years behind schedule.

Many survey respondents worried that outsourcing would result in “the bleeding of engineering knowledge and jobs to global partner companies, hurting both Boeing and the United States in the long run,” the book says. One engineer with 27 years of experience at Boeing opined that “we are giving away the farm.”

The authors found that the decision by top management to emulate the so-called “team” model, pioneered by Japanese companies like Toyota, had a generally negative effect on employee morale rather than promoting a sense of empowerment.

The authors write that “perhaps more in sorrow than in anger,” many people said that “the notion of Boeing as a family, where employees’ contributions were respected as a source of competitive advantage, was a thing of the past, replaced by Boeing as a team where people and positions were expendable or interchangeable with other workers around the world.”

Perhaps even more surprising was how disaffection with the changes at Boeing permeated every level of the company. “Importantly, at the end of our study period, there was no statistical difference between the number of managers and nonmanagers regarding their intentions to quit Boeing,” the authors report, later adding that “as the organization flattened, the career ladder became compressed to a step-stool; many managers and employees felt dead-ended as opportunities for advancement seemed to evaporate.”

For an academic study, “Turbulence” is refreshingly accessible, with a coherent narrative punctuated by no more than the minimally requisite charts, and only occasionally marred by overworking a comparison of the company-employee relationship to a failed marriage.

The interview excerpts are often heart-wrenching, and the long-term, disciplined nature of the authors’ research gives their findings credibility. For these reasons alone, “Turbulence” should be required reading for anyone at a major American corporation, especially in top management.

Arguably, the single glaring weakness is in the book’s prescription for fixing the workplace. Insisting that neither companies nor employees can go it alone, the authors call for government to protect American workers and provide employment opportunities through “safety net programs based on pooled-risk insurance principles.”

That may sound like an ideal combination of the family model and the team model. But given the outcome of the recent midterm elections, any proposal to enlarge the role of government in the private sector is not something the American public is likely to buy into anytime soon.